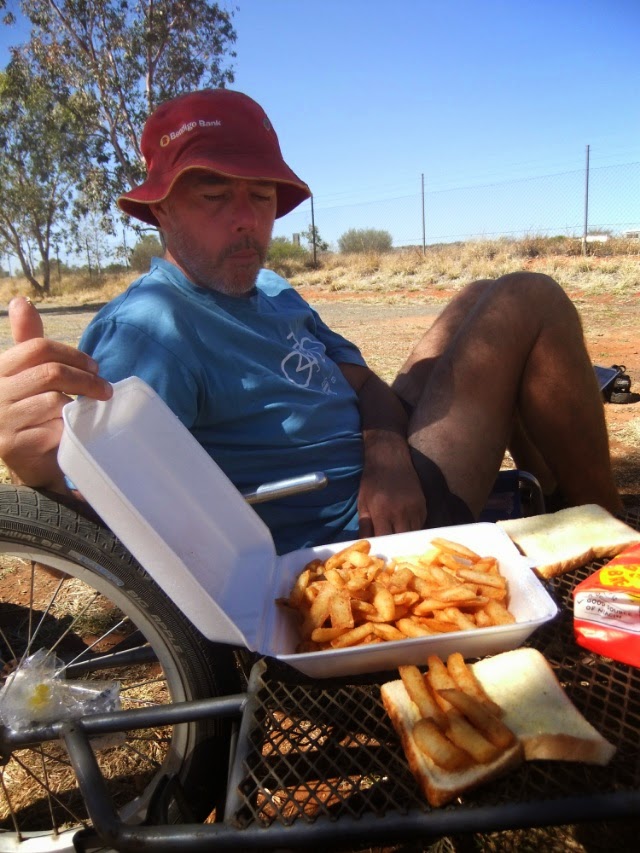 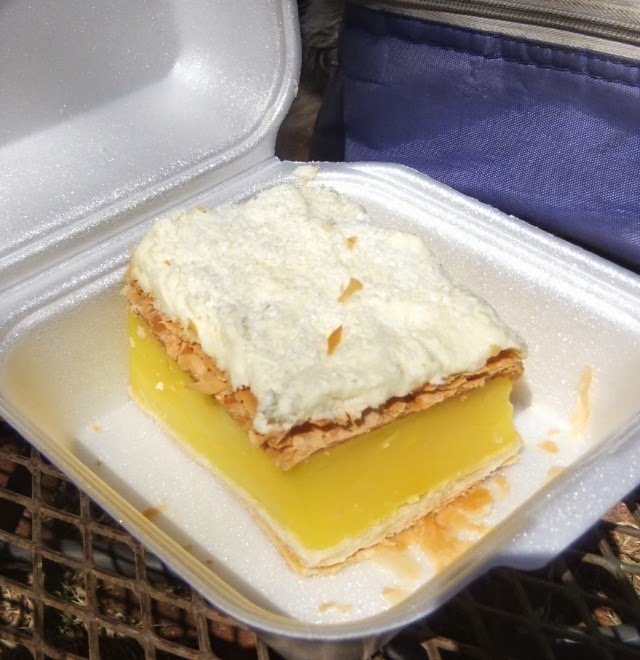 The chips were lovely especially on a white bread sandwich, the vanilla slice was okay - it is suppose to be homemade but the custard was a little bland but the pastry was crispy and flaky and the icing was lovely!  There were a bit more staying here last night compared to our first night we were there.
This morning it was around 0 degrees and the fingers were numb by the time we left.  We were expecting a slight tailwind today but that really didn't happen it was closer to a cross wind and around 15km per hour but it lessened by mid afternoon to almost no wind by the time we stopped - I haven't cooked a dinner in over a week without having to put up with a raging wind whistling around the Trangia cooker!
Despite not having our tailwind the ride was nice - hardly any traffic now, only those going to Alice or to Adelaide are with us now ... most traffic from Alice were going out to Ayers Rock.  The road is a very subtle climb for most of the day (about 100m in 100km!) most of the time you couldn't see the climb but you could feel it!  Due to the lesser wind today it wasn't so cold so within the hour all the layers had come off and were put away.

We were aiming for the  border today so around 95km.  The  surrounds are definitely different to what we experienced before Erldunda but what we expected!  As you go further south the terrain gets very sparse - hardly any gum trees or any trees at all!  the sides are mainly salt bush or Mulga trees which are great to camp amongst.  But one thing we did notice was in amongst the hues of green we spotted some colour so the desert is in bloom and when you look there are heaps of flowers - some coloured and some not so coloured - I tried to take a photo of all the ones we could see 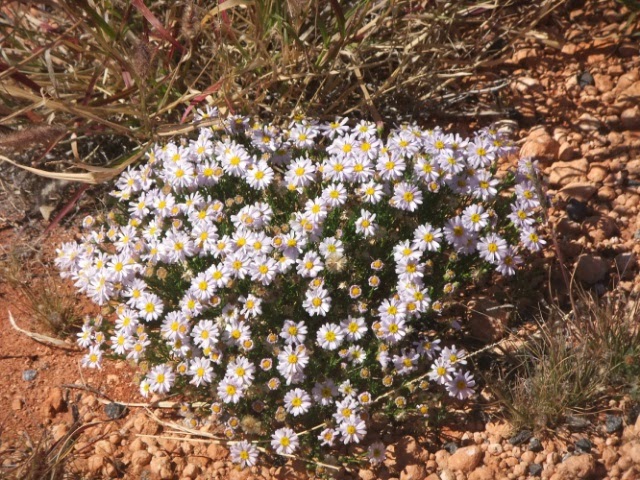 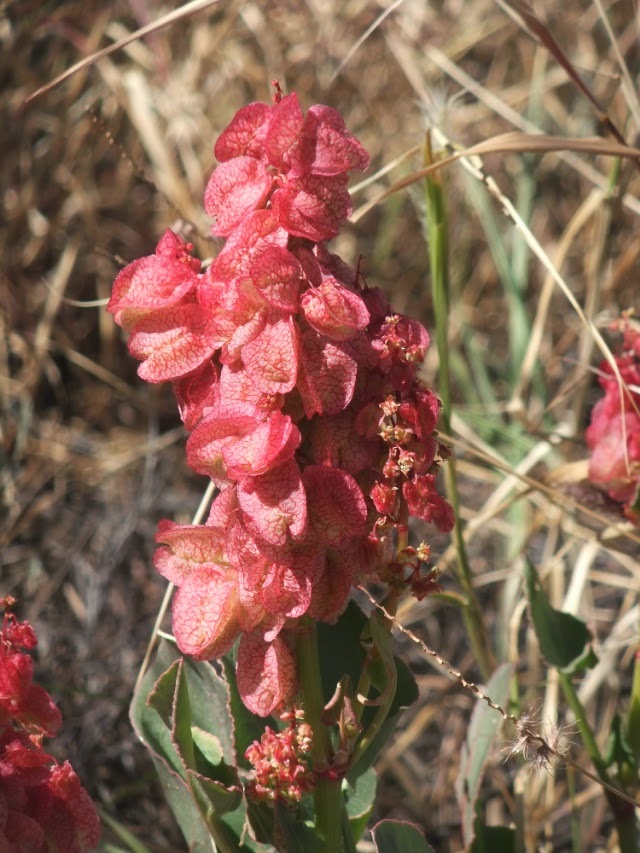 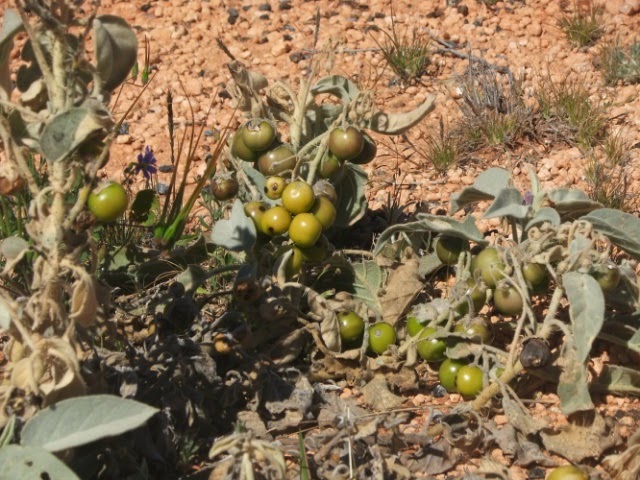 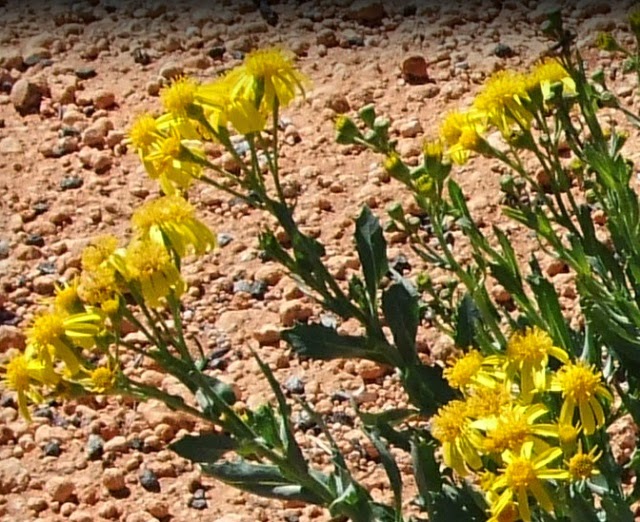 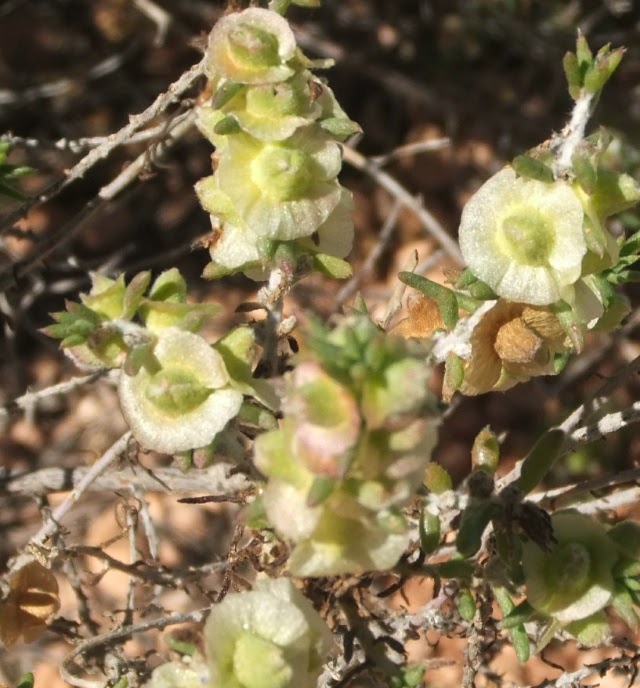 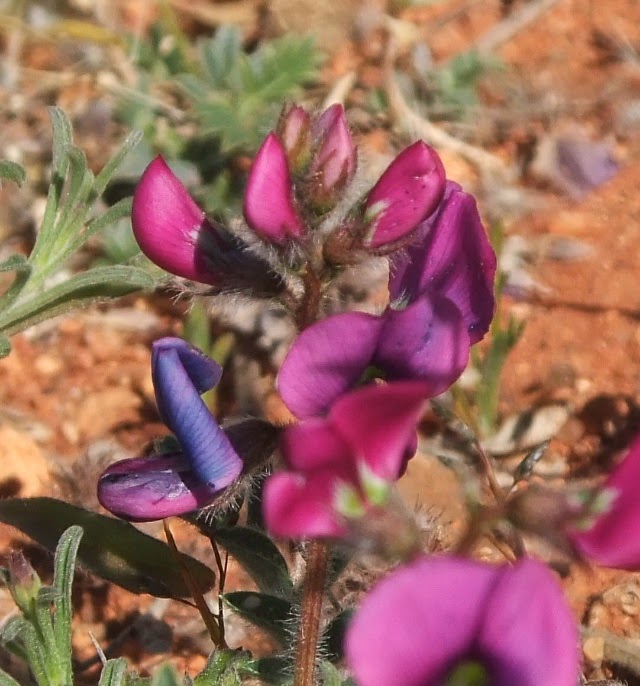 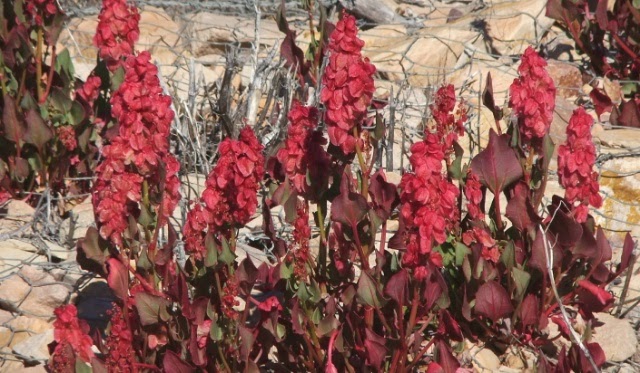 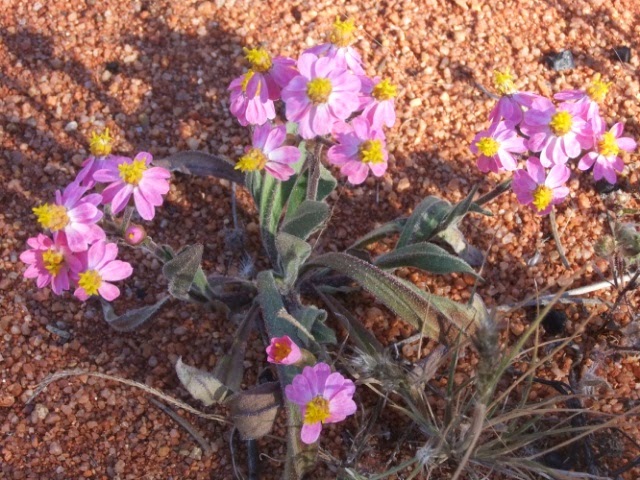 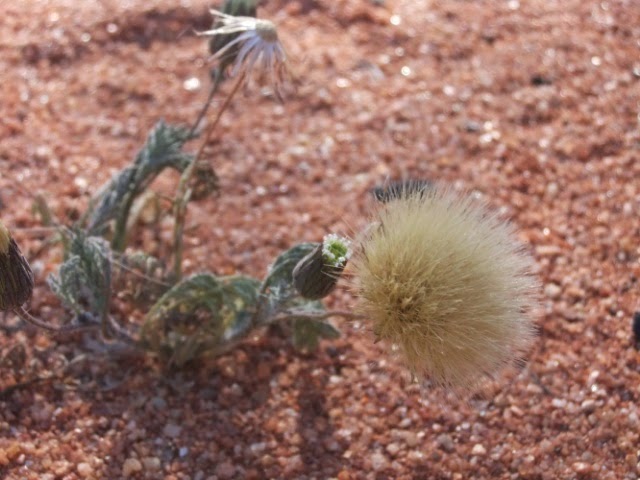 Some flowers are so weird and wonderful and even at our campsite there are some pretty ones but small.  There isn't an abundunce of flowers out here but once you see one it really sticks out and usually it is not alone and will be in clusters and then you won't see any more like it for a while and then another cluster will appear!
We bypassed Kulgera roadhouse which is either the first or last pub in the Northern Territory (depends on which way you are going!)  When I stayed there last (20 odd years ago) the place had grass to camp on ... now there are only small patches or grass but at least they have a proper toilet block now! before they just had portable cubicles for showers and toilets.
20km further is the border and we are camped opposite the rest area.  It is a nice looking rest area with a huge water tank and bitumen parking for vans to stay over but there is no suitable area for a tent so across the road is a vehicle track that leads into an area that is great for overflow and for tents. 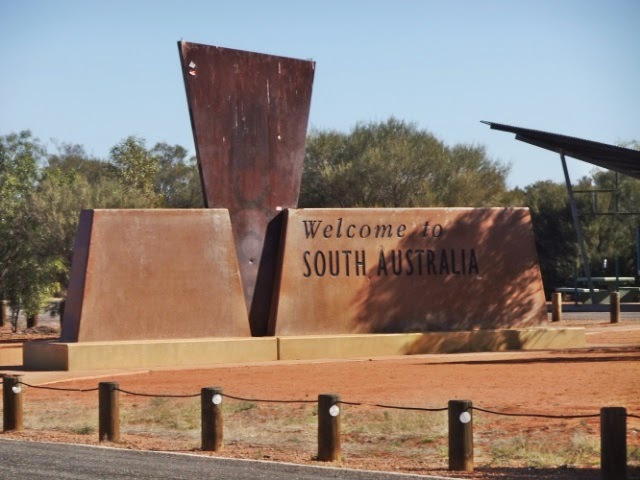 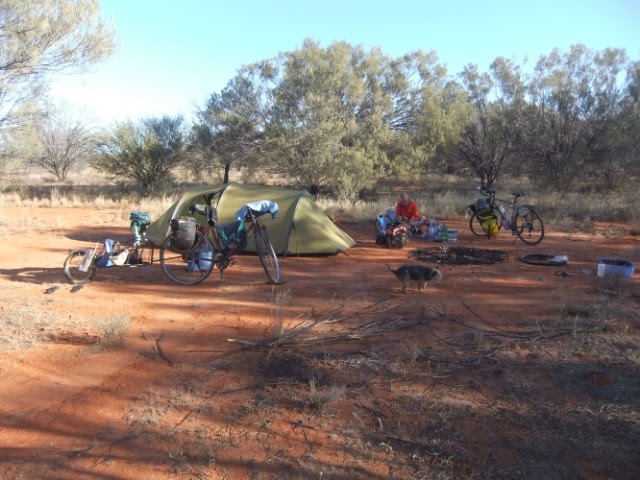 Another camper came across but is way done the other end and we can't see each other.  Tomorrow we will duck back over and fill up all the water bottles.  One thing I forgot to  mention was the water at Erldunda had a slightly salty taste to it - definitely bore water that isn't as treated as the water in the water tanks so I got rid of my Erldunda water and refilled with tank water!

Not sure what tomorrows winds will bring but we are 160km from Marla and will try to go at least 80km and do a bush camp.

It was a comfortable nights sleep last night - not too cold and not too hot.  Even when we got up in the morning it wasn't bitterly cold like it has been.  We filled up with water and we hoping to make the most of the forecasted east north easterly that was meant to be blowing this morning with a change in the afternoon to a east south easterly.
We were away by 8.15am and the wind wasn't up yet but you could feel it starting to stir and sure enough it was a light east north easterly so we motored along for the first 60km.
Just down the road was South Australias' official welcome sign 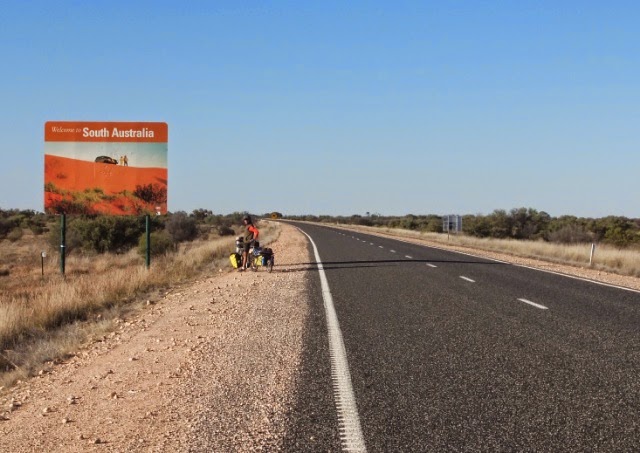 It is pretty sparse around this area and not great for bushcamping so fortunately the rest area had that area opposite.  The wind is gently pushing us along and we make good time to the emergency phone or Marryat rest area at 39km.  Our cuppa is a little early this morning but that is okay. This rest area is big but not really a place for tents unless you go up a track on your right just as you are coming into the rest area but it has a water tank, table and shade.

There is a little more traffic today - we are assuming because it is Saturday and everyone travels the 500km plus to have a weekend away!  At the 60km mark the wind has begun to shift towards the south but it is not strong so we can still sit on around 19km per hour although I am getting slower as the day wears on (especially at the 90km mark!).  One thing we have noticed since being in South Australia is that there is an abundance of these damn grids across the Stuart highway (also known as the Explorers highway here in South Australia). 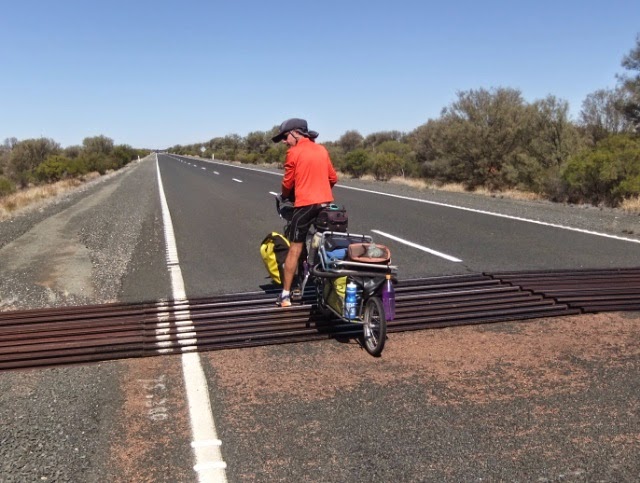 They are a nuisance and we must have had to stop and walk across at least 15 today! 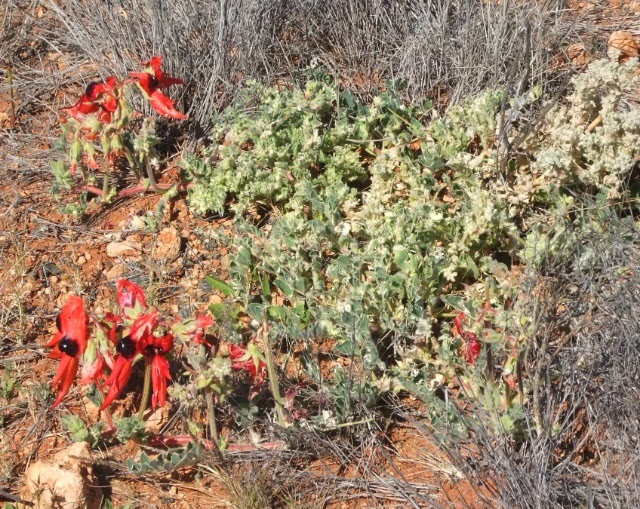 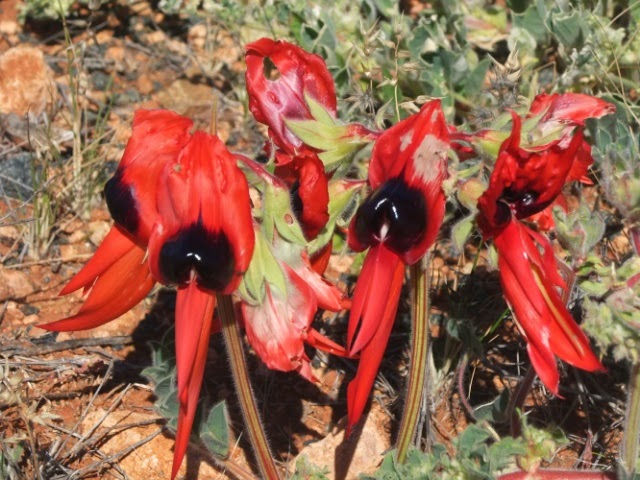 There can't have been rain here for a while as the flowers are really struggling and look like they need a good watering! 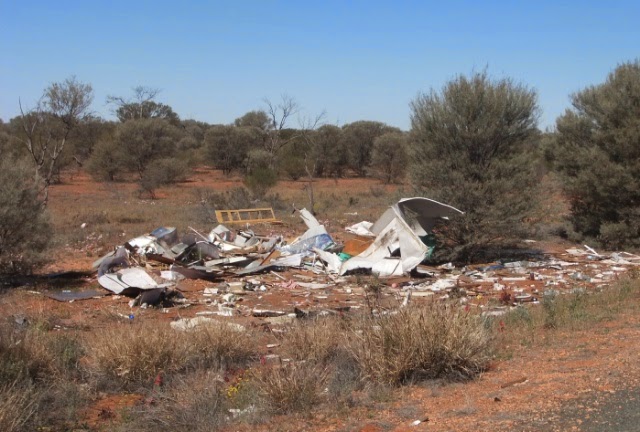 along this highway is gravel and it is thick in places and very easy to go into especially with speed and loose control as we saw with a truck on one of our stops along the road today - it must have swerved into the gravel and next thing I see is the back trailer fish tail it and I think OMG he is going to topple over!
At around the 100km mark we start to look for a bush camp and it is just our luck that 10km before looking there is a lovely spot every 500m and now we are looking there is nothing except stones and tiny little salt bushes that you can't event hide behind to pee!

So we decide to continue and call it quits at 110km if we haven't found anything.  A little further on we come across the potential rail trail to Alice Springs (to connect to the one that is going to go from Alice to Darwin - ha ha ha!!!) 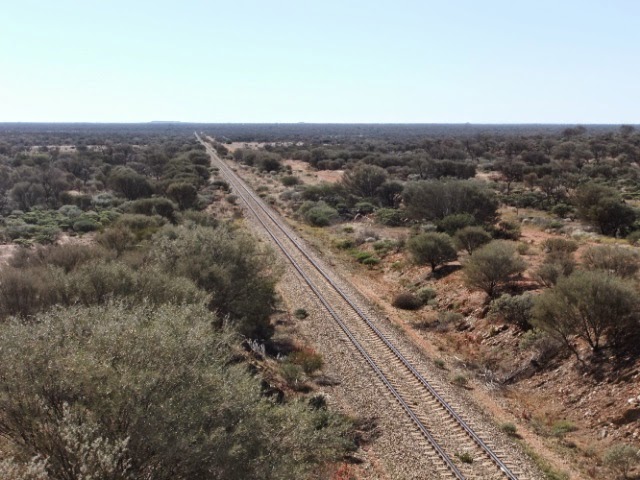 and then just past this we see there is the Tarcoonyinna rest area so we stop just before it as there is plenty of open spaces for the tent but not much coverage in bushes so we can see the road and they can see us!  But this is typical of South Australia and common so we may as well get use to it! 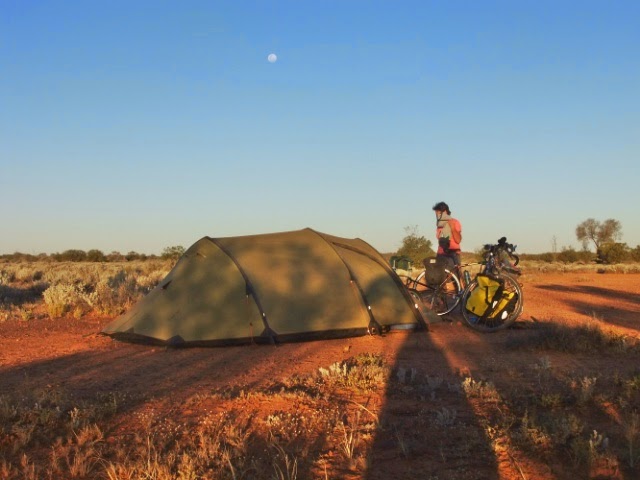 as you can see the moon is nearly full so we don't need torches at night to go to the toilet!  Tomorrow is a shortish day to Marla were we will stay for a rest day - the camping is suppose to be good and we had the last of our 6 pasta meals tonight so all we have left to get us to Coober Pedy is Vitabrits, apples and dried fruit and nuts!  Maybe we may buy a meal at the roadhouse!  Neil  has just informed me we can buy a tin of baked beans at the mini supermarket at Marla - yeah right Neil!

Day 3 - to Marla
It was a coolish night but not cold enough to put all the layers on and sleep in our clothes!  We listened to the Geelong vs. Fremantle game last night and in between falling asleep and loosing the radio signal I managed to get to the end of the game although I think I missed a large chunk of the last quarter and woke up and there was less than a goal difference between the 2 - before I fell asleep Geelong was comfortably ahead!
We left before 8am (first time in a loooooooooong time!) hoping to get an hour in before the southerly wind kicks in ... well there was next to no breeze for the next 2 hours and when it did blow it was very gentle - why can't every cycle day be like that?!
The scenery 5km down the road changed to the usual Mulga bushes which is great for camping - in hind sight we should have continued for a more covered bushcamp but unfortunately we cannot see what is ahead! Below is a photo of peak hour traffic along the Stuart highway ... 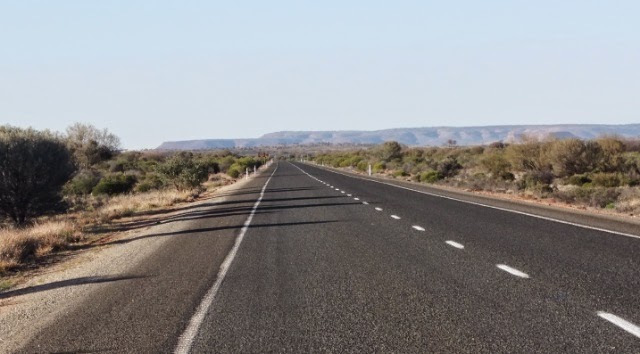 Our highlight for most of todays ride is seeing a heap of vintage motorbikes and cars going north.  They started at about our 5km mark and we spread out over the next 30km some of the motorbikes were going marginally faster than us! 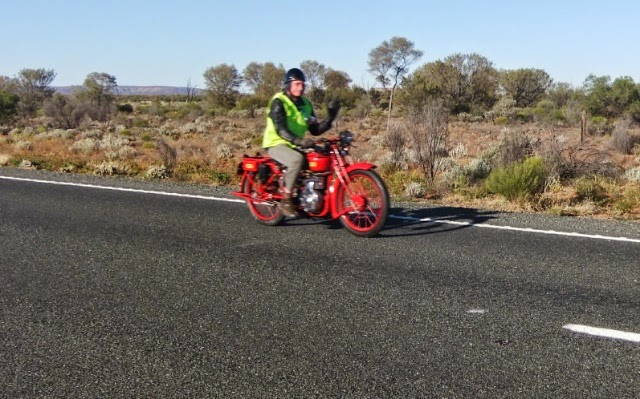 with these cars and bikes were also the support caravans and cars and trailers so they took up a fair bit of the highway and cars wanting to overtake them weren't exactly happy and were really upset if we were coming up at the same time as them wanting to over take the vintage cars! 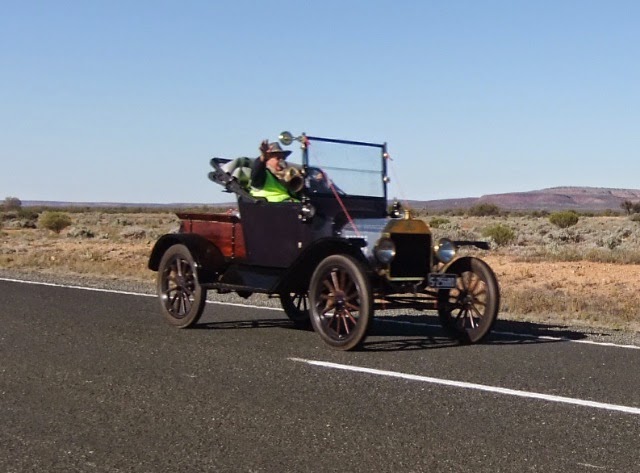 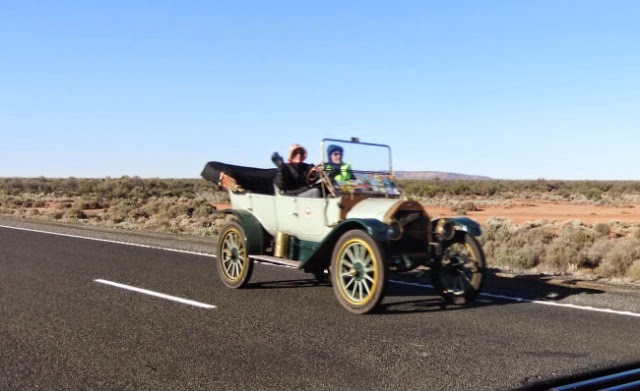 We get to Marla at around 11.30am and this is a really nice roadhouse that has everything - mini supermarket, hotel, motel, dongas, caravan park, Post Office and Commonwealth bank agents, petrol station, pub and restaurant ... all under one roof!  It is a well kept roadhouse and is very popular with the caravaners as the amenities are spotless compared to alot of other roadhouses along this highway.
We get some bread for lunch and a Helgas loaf only cost us $5.30 which is not bad for way out here.  The supermarket is well stocked and they sold BBQ packs with 2 sausages, 2 rissoles and 2 pieces of steak for $7.86 so we had that for tea with fried eggs - let me tell you after having 6 nights straight of pasta and salami watching us eat tonights dinner was not a pretty sight!!!
We will stay here tomorrow for a rest day as the southerly winds are coming again so we are in for a tough ride to Coober Pedy with some very cold days coming up!
Posted by Janet O'Brien at 6:01 PM