Glendambo to Bushcamp - near Lake Hart 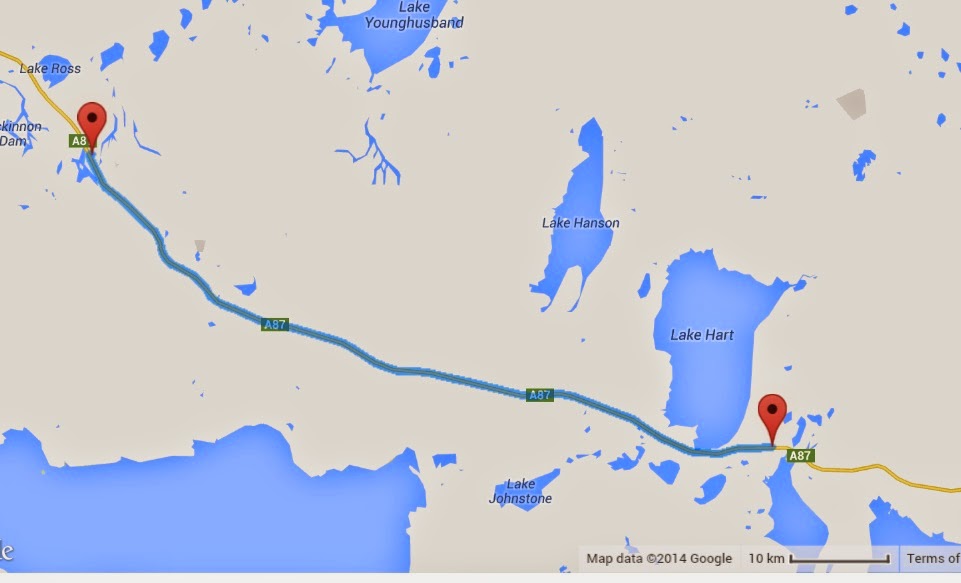 Glendambo to 5km South of Lake Hart = 78km
Cummulative totals = 7171km and 27,127km
Bush camp
Well it seems like we will be getting reception nightly now as we have internet reception.  We think this is due to the face that Roxy Downs is not far away so communication is important.
We woke this morning to a lovely sunrise just outside the tent ... 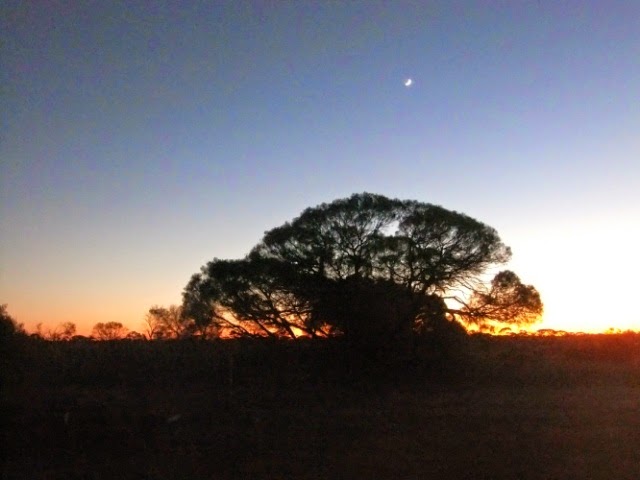 The tree makes a lovely silhouette (spelling?).  We left just on 8am and the breeze picked up straight away ... it was a strong north easterly! and guess which way we are now going ... east!  Can you believe that!  The road swings east until Pimba which is 113km away - this northerly is about 2 days late and is only here for today and tomorrow.
Just out of Glendambo we saw our first live Kangaroo since coming down from Normanton ... that is over 2000 km ago!  Yesterday we noticed as we got closer to Glendambo we started see dead kangaroos and lizards on the road - previously we had seen NO dead animals since being in NT and South Australia!  So the bulk of the ride today was into this cross headwind, although predominantly a cross wind it battered and shook us around and pushed us out into the road so we had to constantly struggle to keep the bike aligned to the white line!
Traffic was heavier than normal but as we get closer to civilisation the more traffic we will encounter.
We had a cuppa in a hole! 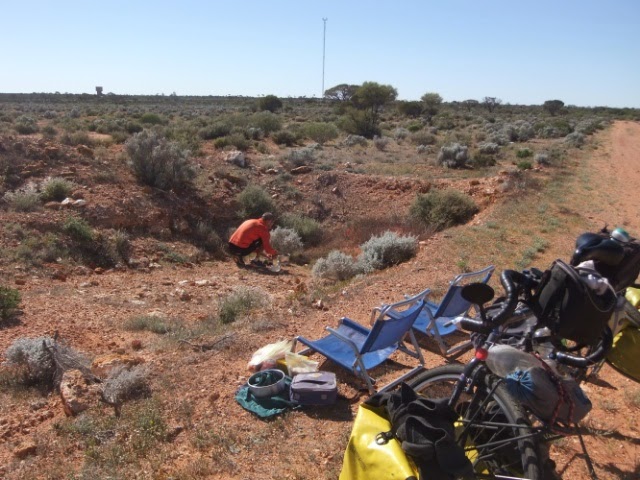 to stop the wind from getting to the Trangia we found this handy hole to boil our water in!  And here is a photo of my favourite flower at the moment ... 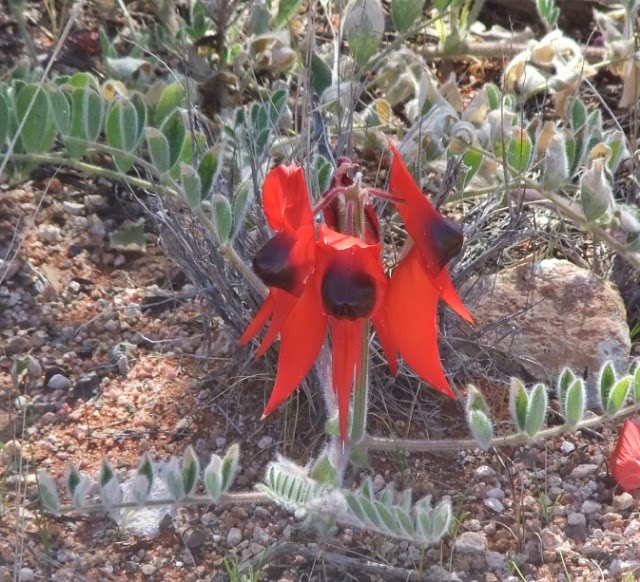 there were quite a few clusters of these today - predominantly on the left hand side of the road, in fact they tend to be more on that side of the road than our right side of the road!
I looked forward to getting to Lake Hart - I stayed here before at the rest area but now it is really popular so we won't be camping there as there is no privacy to go to the toilet.  Our first glimpse of Lake Hart ... 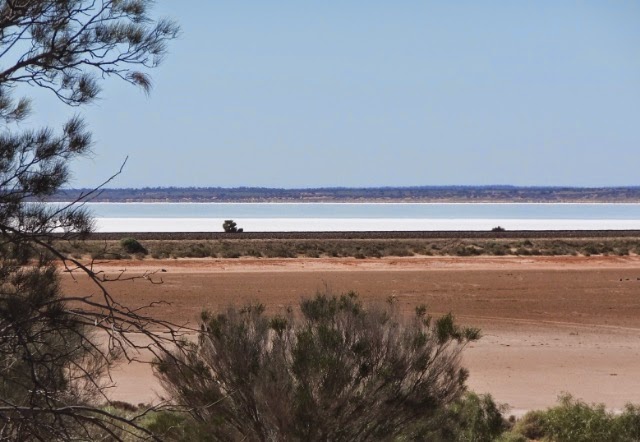 it is strange seeing this body of salt water (which is our first body of water since Normanton river!) and in fact when you see it it is a bit like being at the beach! 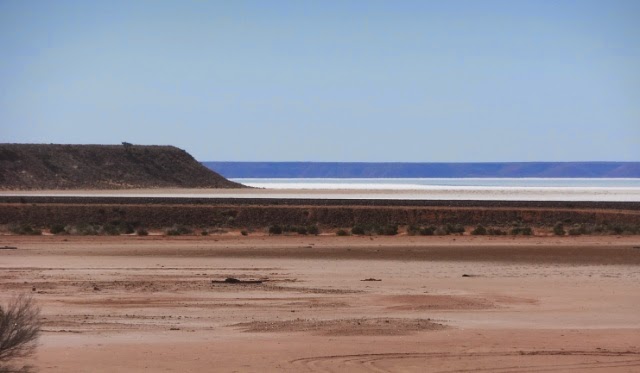 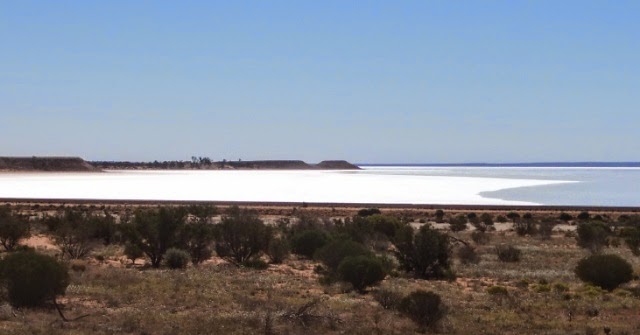 while at Lake Hart there was a couple chatting to us and they asked if we were camped at Barkley Homestead and we said yes about 5-6 weeks ago and they said they thought so as they were in the hotel there and they recognised the dog!  Small world!
So after filling up with water at Lake Hart we continued on down the road and got about 5km and came to a drive and took that and we decided to opt for shade rather than privacy today so we are in front of some trees that gives us shade for the rest of the day ... although the flies are very thick here! 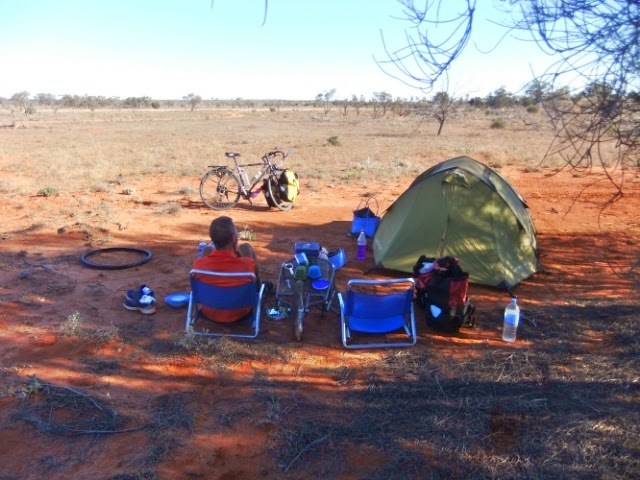 tomorrow we will make for Woomera - about a 45km day.  In time for the Geelong vs. Hawthorn game at night - after 9pm your time Mum!
Posted by Janet O'Brien at 5:27 PM