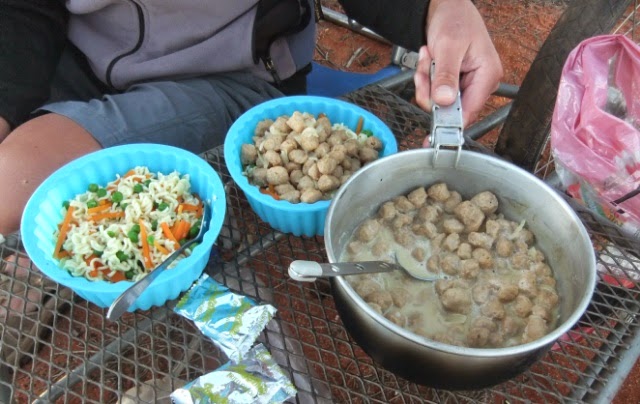 In the pot is the tofu after adding hot water and letting it soak in and also onion and coconut milk in the bowls is 2min noodles, carrots and dehydrated peas.  We have one more  meal left and I will endeavour to remember to take a photo of when the tofu is in its' dehydrated form as it looks like dried dog food and when it is cooked it looks like little doggie terds!!!  But it is really nice to eat (but don't use the seasoning that comes with it as it is mega hot and spicy - we used the seasoning from the 2min packet!)
Now while in Coober Pedy Neil went clothes shopping and came back with 2 pairs of socks and 2 beanie type things.  One beanie is pink and he hasn`t used it yet but the other he loves - here he is with it on ... 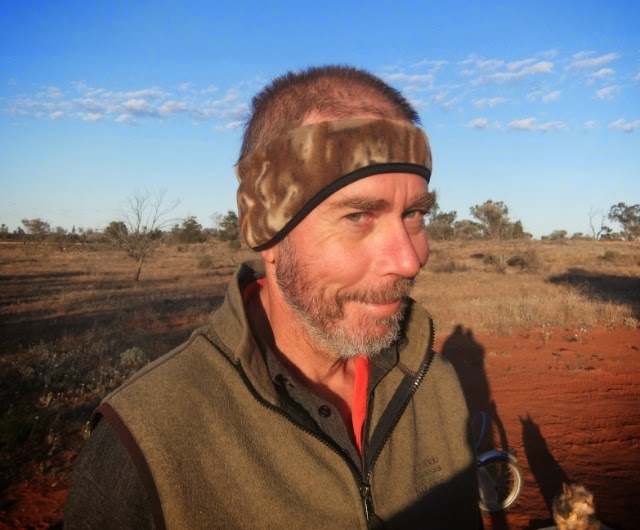 my question to you is what can I call it?  I have to give it a name and it has to be as if we are taking the piss out of him!  You remember those short light blue fancy nancy pants of his ... well along those lines ... at the moment all I can come up with is his `man band'  bearing in mind it is a tiger print pattern on it and another name could be his 'gay band' a bit like his gay pants he sometimes wore when we first cycled (they were tights and Neil just doesn't have the legs and butt to pull it off so they just hung of him and he looked hilarious!!!)
So todays ride was short and completed before lunch.  The wind is still a northerly and the terrain is quite barren and only stunted salt bush can be seen.  We did see this massive salt lake on the way 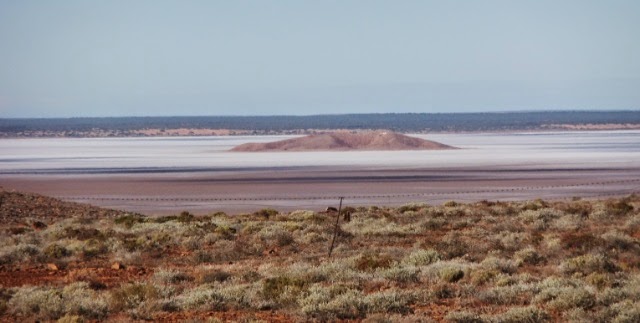 We turned north at Pimba and it is a 7km ride to Woomera ... like alot of roads in South Australia they can be half the length they are if they made them straighter ... the road to Woomera is one of them!
I came here 20 odd years ago and it was a thriving little suburb in the middle of the desert.  As soon as you got to this place it was like entering an American suburb like in the Partridge family (if you are Neils generation), Beverly Hills 90210 (if you are my generation) or Desperate House Wives (if you are younger than me!)  It was very lush and green and manicured lawns and gardens ... now the houses are mostly empty, drought or water is more expensive now has led to less care with the gardens (a bit like Bendigo when they had no water) but the houses are still well kept and are in good condition.
the supermarket is half empty but still well stocked, the buildings are not in use, the museum is closed and only open on weekdays - yet there were heaps of caravans around where they display the missiles, planes and military equipment (I will take photos of those for you tomorrow Ray!).
We think the town is now taken up by those working in the mines about 80km north (Roxby Downs) as we saw them coming home early evening.
It is a lovely well kept town but not like it was 20 years ago.
It is an interesting town with its origins from the missile and rocket testing facilities established here back in the 50s I think.  As you enter town there is an information board and opposite is this Long Ton rocket .. 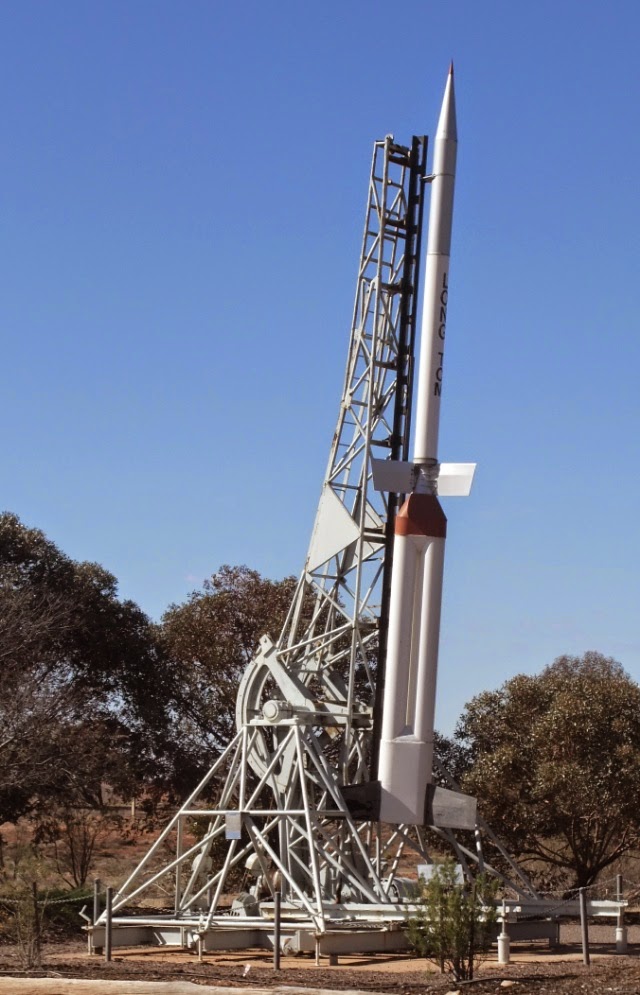 and below is a Blackstone diesel engine ... 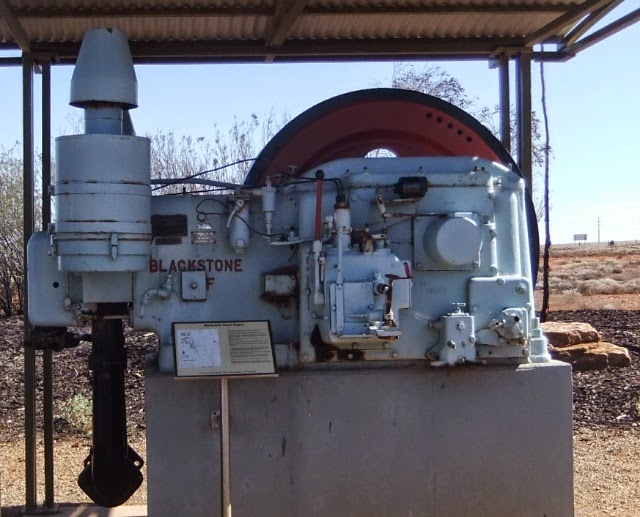 we will be having a rest day here tomorrow, the supermarket is open from 8.30 to 2pm Saturday and Sunday.
The campground is okay, no grass so we are camped on sand.  It is an interesting park - the owners are a bit strange - when we arrived just before lunch they were setting up in the caravan park bbq area a small get together of them and their friends and it is opposite the unpowered section so we could see and hear their music (in fact all could hear the music)  so we set up thinking they will just have lunch and move to their own private area ... no they stayed there all afternoon and then moved to the caravan park bar and have just finished sort of now - 6 hours we had to put up with them with their drinking.  Although not obnoxious just getting a little louder and annoying towards the late afternoon.  We think this is strange as no one could really go and use the bbq and I know this is their park but for crikeys sake you own a caravan park don't treat the facilities meant for the paying customers as your own private use - create you own in your home!  I don't think they are the ideal caravan park owners or operators.  the music was loud but not too loud that it was annoying but your paying customers are 60 plus in age ... if they wanted this sort of atmosphere all afternoon then they would have gone to a Club Med!
Anyway more photos tomorrow of planes, missiles and rockets!
Posted by Janet O'Brien at 7:13 PM