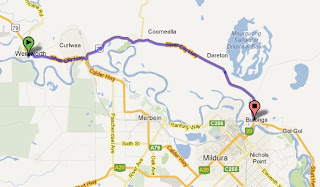 It was a lovely rest day at Wentworth yesterday and we took Kouta for a long walk hoping to tire him out.  We went down to the river junction where the Darling River meets the Murray River ... 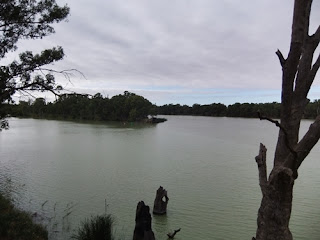 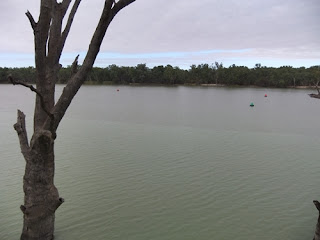 it you look hard in the above river you should be able to see the line.
Although our rest day started like every other day so far - grey and cloudy, it turned out to be a clear sunny day.
Today we woke after a clear night to a slightly cold morning.  We didn't need to rush as it was only  a short day to Buronga.  Not far from the caravan park is a park where the P.S Ruby is docked and has been rebuilt ... 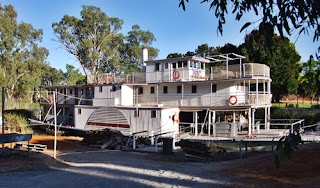 it is a lovely paddle steamer - great to live on!
We took the Silver City highway through Dareton and onto Buronga.  It is a nice enough road, although at times it felt like you were forever climbing but we couldn't see what mountain we were climbing!  The view along this road is very different to the road going to Wentworth - it is not as heavily developed agriculture wise along here - still scrub and bush.  But as you get closer to Buronga there is an increase in agriculture - especially orange farms.  We did pass a 2 huge wine grape processing plants with massive vats one which is Stanley.  Neil picked up a small jar of honey along the way and didn't realise that it was only a 375gram jar so he is a little miffed that he paid $5 for it!  He didn't have his glasses on :)
We got to Buronga at around 11.30am and at that time it seems every other caravan also turned up.  We got a powered site to recharge everything and it is a massive park and we are squeezed in tightly that we can hear everyones conversation - so Mum I think the neighbours heard all about your colonoscopy and unfortunately I had to listen to a couple squabble for a good 30mins about how she booked a boat tour for tomorrow and he goes of his rocker because she didn't consult him first before booking and she is arguing saying that he told her to book any .... blah, blah, blah .... personally I think he is bit of a pr--k (rhymes with sick) as when he wants to go to the toilet he always cuts right through the middle of our site since we only take up a fraction of the space that the site has so instead of going around by road he cuts at the back of the tent and walks across the middle and front of the site ... lazy bugger!
We are not on the river front itself - a row back from it and I had to run to get a photo of this paddlesteamer before he went out of camera view ... 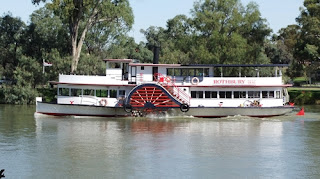 Lots of 3 thorn jacks around and we have to be careful - so far we have had none stuck in the tyres (touch wood).  Tomorrow is a big day to Robinvale - we have done this road before.
I have to tell you that our neighbour has a cockatiel in a bird cage and Kouta noticed it straight after he has his chicken wing for dinner and boy was he determined to get at it even though it is in a cage.  He was difficult to control until Neil had to smack him (and that really shocked him) and so he sat there for a good 10mins eyeballing the poor bird and he did not want to go for a walk.  Right now he is sulking in the tent with me as all he wants to do is sit and eyeball the bird!
Posted by Janet O'Brien at 7:03 PM