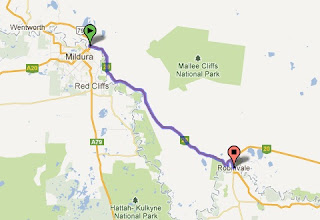 We got up early today as we knew it was a long ride, Neil got chatting so we were delayed by around 15mins.  The road (Sturt highway) to Robinvale was busy - alot busier than when we last rode it!  The local traffic, caravans and trucks were constant from start to finish.
The road runs in a south east direction and the wind is blowing from the east.  Not a hard wind but enough to remind you that you have a cross wind/head wind.
The road condition is not suited for cycling - the road is predominantly large stones sticking out of tar and there are smooth patches on the road compared to the shoulder which is not easy to ride in.  At first we rode in it but it became so rough that we stuck to the road and ducked into the shoulder when we had to.  The traffic didn't seem to mind.
We have ridden this road before so there is no need to take photos not that there is anything to take photos off!
At 40km we had a cuppa at a rest area, then there is a rest area every 14km to Euston which is fortunate for us.  By the last rest area the legs and arms are all sunburnt and the legs are tiring.  The butt is beginning to hurt from the roughness of the road which vibrates up through the bike.  From here the last 10km to Euston there is no shoulder and fortunate for us there was no point where we clashed with oncoming and traffic behind us.
It was a relief to pass through Euston which means there is only another 5km to Robinvale.  Coming over the bridge over the Murray river you can see the campground and it is chockas!!  all along the bank of the river are a city of tents and vans.  We were here February 2011 and it wasn't that crowded but apparently over easter and the week after easter parks like these are crowded - they start thinning out this weekend.
So we managed to get a spot and we chose an unpowered spot as no one takes an unpowered spot and we are basically by ourselves ... 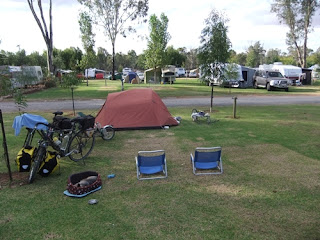 We can't see the river but we can hear the boats going up and down.  It is a very hot day today and it is tempting to go for a swim, but I couldn't find a way to get to the river without going through someones site.  In the end I went for a swim in the shower!  Hopefully I will get to have a swim at Swan Hill as the next week the temperatures are expected to be in the high 20's which is fabulous.
Tomorrow we go to a place called Manangatan (funny name aye!) ... the name fits in perfectly with the Muppets theme song! If you think that name is funny wait until you see the name of a town that we pass through on our way to Swan Hill on Sunday!  We have deliberately chosen our route not only because they are on quiet roads that we haven't been on but also because of their names!
Posted by Janet O'Brien at 7:44 PM