We woke to a beautiful sunny morning but the south westerly was still blowing and it really made it very cold. But first I must show you a photo of Kouta (taken yesterday) who over the course of the day became very attached to our onsite caravan ... 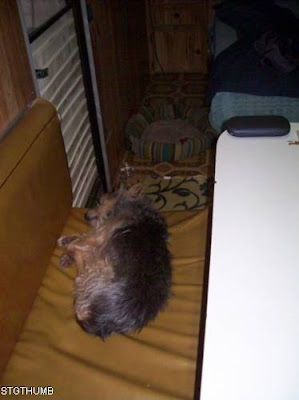 ... he grew very attached to this position at the table so much that when he came from the outside he expected to take up that position right next to me while I was still eating my brekky!
We said goodbye to Darryl and Maureen and headed of on one of the only roads (supposedly open) out of Lockhart. The road was really good and riding along you would never guess that some of the region has floods ... until about 19km on when you come across some broken bits of road and a field that has a pond running through it! 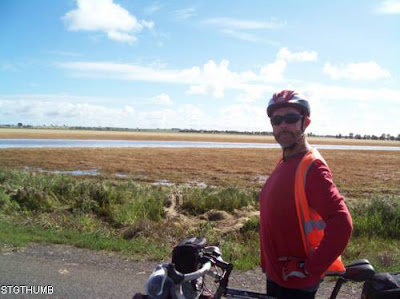 so the water you can see in the background is just a stream that has occured because of the way the lay of the field is but that leads to this alongside the road ... 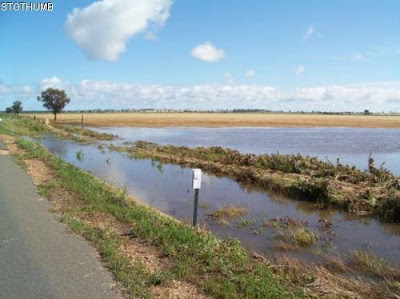 ... and that causes water on the road on Friday and probably Saturday and it leads to this ... 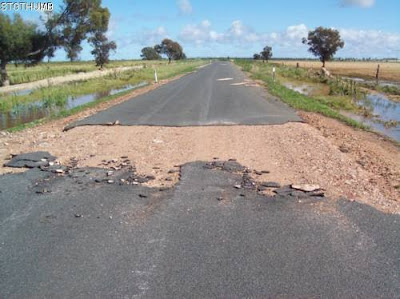 water has got under the sealed surface and the bitumen just peals away!
Not far from this you come to a sign that says 'floodway' and there is a really nice car parked there, as you ride past it you can see there is condensation inside so you know that it has entered the flooded floodway either Friday or Saturday and has stalled just like the red car at Lockhart and has had to be towed out! 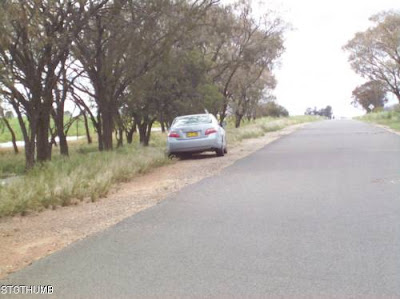 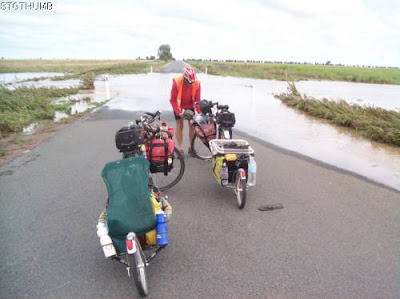 and me being the smart one I do this ... 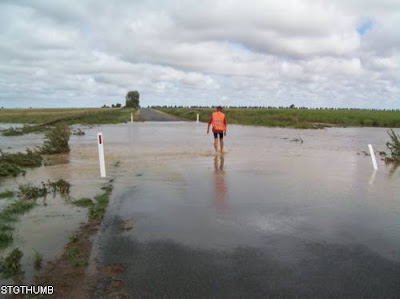 ... send Neil in to 'test the waters'!!!
He reports back that it is cold and too deep to ride through but we can take the trailers off and carry/wheel them through and come back and walk the bikes through ... so that is what HE does while I record it on video and photos! 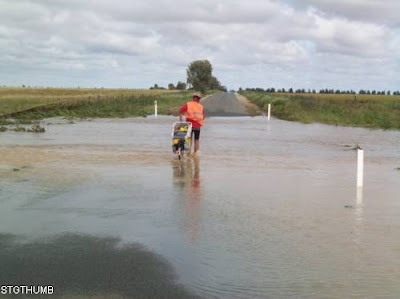 trip 1 - wheeling his trailer through ... 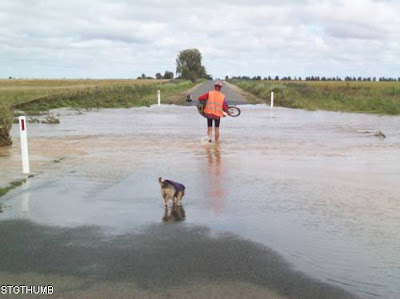 trip 2 - carrying Koutas trailer through - Kouta thinks he has to 'follow' his basket and attempts to cross but soon decides that it might be too cold for his paws!
trip 3 - Neil carries Kouta and I push my bike (I had to put the camera away and was not allowed to try to capture this trip on camera and push my bike through the water!) 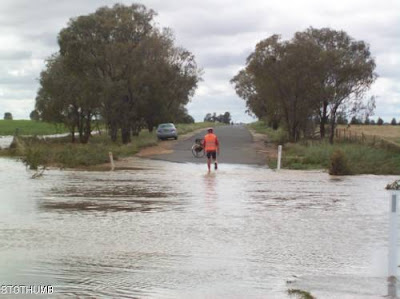 trip 4 - Neil is about to retrieve his bike to push it through the water!
So that was our little adventure for the day. As you can see we are no longer in sun and the wind is still very cold we also have a very strong headwind today so the going is very tough.
We get to the Boree Creek - Urana road and find this sign ... 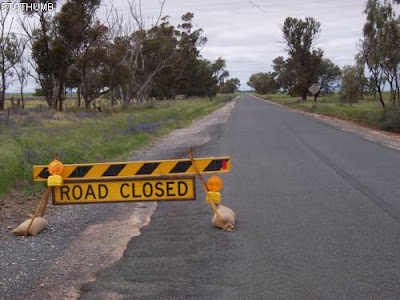 ... LOL the road we just came through was still closed - Neil gets mad saying the left hand doesn't know what the right hand is doing with regards to councils etc ... until I point out that probably the council couldn't get to the Lockhart end of this road (where we entered it) because that was cut off from the flooding of the causeway in town so there was no way to put a sign up there - the above road sign is primarily for the public on Friday telling them don't use this road to get to Lockhart! He seemed to accept that explanation!
We get to Urana and find the campground empty - the caretaker has told everyone to get out while the roads are still open around Urana ... why because they expect this town to flood sometime on Sunday if not Monday!!!
Crikey we have just lept from the fat and into the frying pan (I think that is how the saying goes!!!). So we can't go anywhere because the next campground is 60km away so we set up camp at the highest point in the campground and in the evening we pack 2 emergency bags in case we have to climb up on the caretakers roof to seek refuge until we are rescued and put everything else in the male toilets so they aren't washed away ... I didn't sleep too well that night!
Walking around town we see the lagoon at the back of the campground is high but not being a local we don't know what is the norm 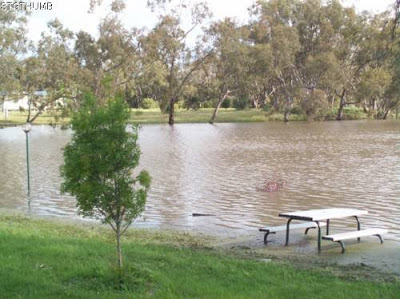 we assume that the table is not suppose to be under water like it is in this photo!
In the evening more SES crew came in the campground to help with the sand bagging of the township itself - they had already evacuated 7 houses that are in threat from the flooding and they are frantically trying to do something to divert the water to prevent the lagoon from flooding too much.
They sort of closed the Urana - Corowa road as some bridge was deemed structurally unsafe so that blocked us from going to Berrigan tomorrow via the back roads - so we will now have to gothe long way to Berrigan via Jerilderie.
Posted by Janet O'Brien at 3:26 PM