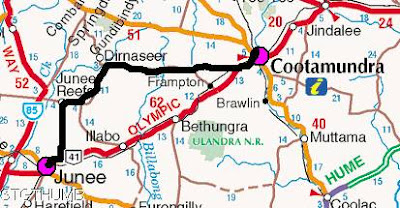 Cootamundra to Junee = 68km (via the back roads!)
Cummulative total = 7885km
Whew what a day! we had a howler of a tailwind this morning - according to Elders it was around 39km per hour!!! lucky for the first 30km we were going west as the wind was a blowing from the east! So basically the wind blew us up the hills in the first 15km and then basically we hardly had to pedal for the next 15km as it was mainly down and along! After 30km we turned south and had a cross tailwind for the rest of the journey to Junee. We could have had a much shorter day if we took the Olympic highway (around 48km instead of 68km) to Junee but we decided that it would more than likely be busy so we found the back roads far more pleasant with next to no traffic and the road conditions weren't that bad either - some parts were actually only one lane wide and there was one point were the old road signs were still in 'miles' and not 'kms' that is how often the roads are used! 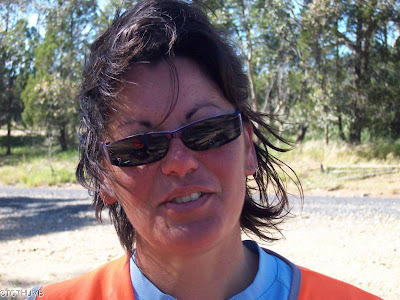 see the damn wind was blowing my 'helmet hair' everywhere! 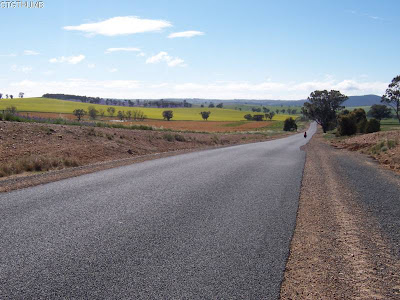 that is me in the distant and we can now see way off in the distance now and it is far flatter than what it has been for the past month or 2! The riding was really nice today - a mixture of up, down and a fair bit of riding along flat sections - it was a welcome change to not have to constantly change through the gears to get up and down the hills!
We had a cuppa at around 39km and just pulled up alongside some farmers gate to lean the bikes up and Kouta immediately sort of the long grass to take a break! 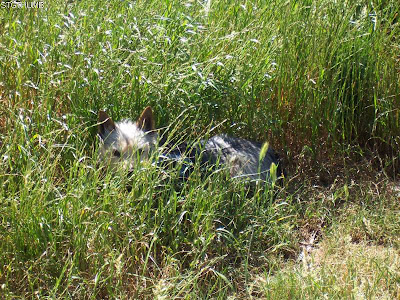 all around us were canola fields and I think Neil is starting to have a real obsession with canola as he always takes photos of them so I dutifully add them to the blog! 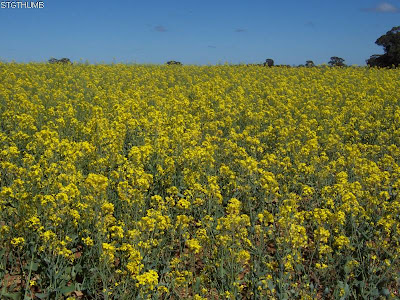 Since it was such a strong wind today it played havouc with my hayfever - and generally I am okay with the canola and wheat fields .... 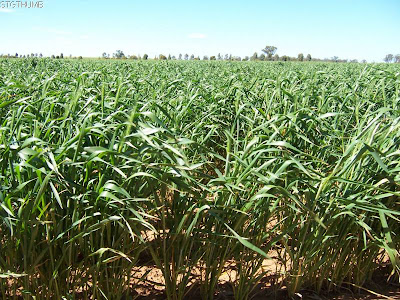 ... but as we passed a rye grass field (at least we think it is rye grass) it just set me off completely and all the way along this paddock I sneezed! 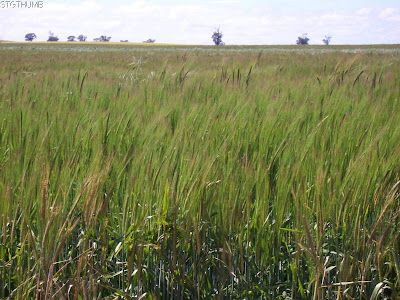 Just before we hooked up to the Olympic highway 8km before Junee we came across this lying at the side of the road - I missed it at first but Neil spotted it and went back to have a look - he tends to think that it is dead but when I went back to have a look it certainly didn't look dead to me as it had a certain 'shine' to it - I think it was sleeping and laying in the sun to get warm! 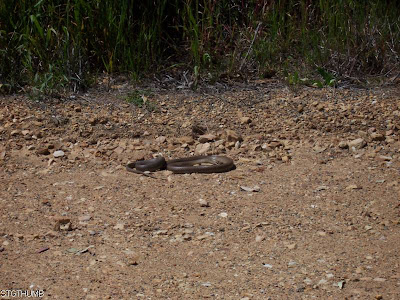 It is either a brown snake or a copper head snake - didn't want to get too close to identify it exactly!
Once we joined the Olympic highway we were glad we took the back roads (albeit 20km longer!) as the road was busy - alot of car loads of men travelling back to Victoria after the Bathurst weekend!
Tomorrow we try for Coolamon or Wagga Wagga - it is a short day to either place but there is forecasted rain for the next 3 days so we may get stuck somewhere!
Posted by Janet O'Brien at 3:09 PM