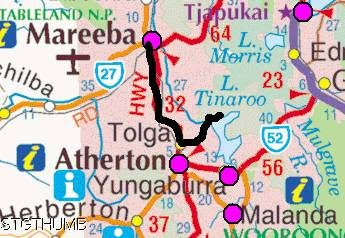 We managed to make a move today and got out of the campground as we didn't really want to stay there. Neil looked at the weather radar and there was only showers at Cairns and along the coast there so we headed off after stocking up on a little food incase we get stuck in a small town over the weekend.
We blew the budget yesterday and bought Kouta a new basket as his one was becoming very smelly in the tent and was beginning to get holes in it. We also decided that we would buy 2 flouro vests to cycle in - Neils blue shirt is about to fall apart and he will use his black shirt so it is important that cars can see us so we got a flouro vest for that and I got myself one as once we start hitting the cold weather I will end up cycling in the black thermal and so I will need a flouro shirt while cycling and also it is rather grey weather sometimes up here so at least they can see us in our bright orange flouros! The funny thing is Neil decides this morning that he will cycle without a shirt so he stripped off and wore his flouro vest only! ... take a look ... 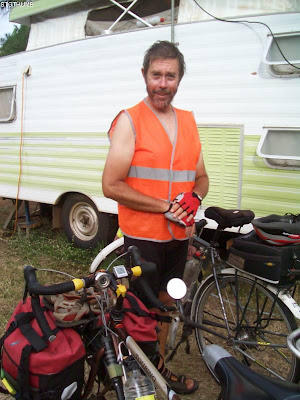 ... no Mum Neil is NOT wearing a white t shirt under the flouro vest!!! and he rode all the way to Lake Tinaroo falls without a shirt! and below is a photo of Kouta in his new basket! 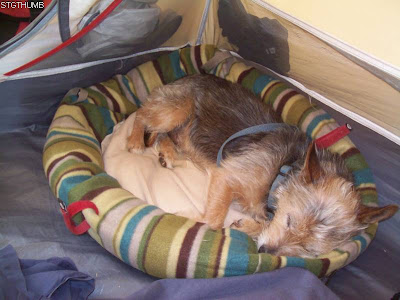 it is not exactly the best for putting in the trailer but it is all they had! but as you can see he loves it!
So todays cycling was hard - It was a slow constant grind to get here with very strong headwinds and the road is a gentle incline to Tolga basically we went from 300m to 770m before coming down a little bit to the lake. It was a cloudy day but dry and still no rain so far. The locals say it will be here this evening and tomorrow.
The traffic was very constant today (all local traffic) and there was no shoulder in places - at one point we had 2 trucks in a row that didn't slow down at all and on the second truck Neil yells out to get off the road ... so we quickly got off even thou there was a 10cm drop off the bitumen! but as Neil came off the road he ran over a piece of discarded truck tyre and that got caught up in the back wheel and gear clusters. So he had to unload the bike and untangle it - he was not happy!
Along the way we stocked up on bananas again and even a bag of avocados ... yummy!
I was relieved to get to Tolga and we decided to go to Lake Tinaroo Falls campground to sit out the rain if it ever gets here. We checked when we got here on the weather radar and the rain amount is less than what they predicted.
The campground is crowded, as I think a few people from Cairns have come up here to fish in the Dam since it is a 3 day weekend for them and it is part of the Top Tourist group and we have decided to get a powered site so we can sit here in the tent to plan our route down south as I need structure in my day to day cycling! and not like Neil who is rather nonchalant when it come to day to day cycling!!!
After this we will go for a walk to see the Falls hopefully but there is an abundant of bird life here and they are very friendly. 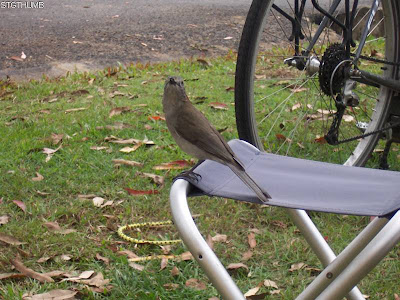 we think the above bird is a Dusky Honeyeater. It makes a lovely chirp - a bit like the NZ bird the Tui.
Posted by Janet O'Brien at 3:05 PM