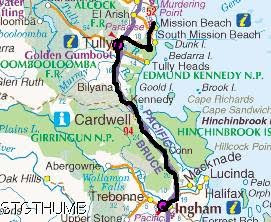 We had an enforced rest day in Ingham on Tuesday due to rain - it rained all night and all morning and cleared a little in the afternoon but then clouded back over towards the evening and drizzled for most of the night again but at least it showed signs of clearing on Wednesday morning!
But on our first night we had company and another cycle touring couple was camping next to us but what is special about these 2 was that they are both in their mid 70's!!! I kid you not! so Ray and Flo ... get training!!! 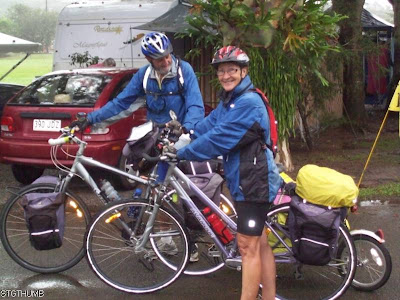 normally it is everyone taking photos of Kouta in the trailer and for the first time on this trip we actually got to ask someone else if we could take a photo of them! Their names are Don and Elaine from Bundaberg and they have cycled from Townsville up to Mareeba and back down to Townsville. The have been on the road for 28 days and have had 27 wet days!!! But they were a lovely couple and we enjoyed chatting to them and Don is alot like Phil (my dad) in that he carries the most unusual things! - he carried a hammer and a slasher to clear the long grass when they bush camped! we tend to use a rock in replace of the hammer and tend to lay the ground sheet on the long grass and lay down on it to flatten the grass to replace the slasher!!!
On our enforced rest day another couple gave us 4 small bananas so that was really nice!

Ingham to Bilyana Rest Area -
It rained a little bit in the morning when we left but Neil being the optimist could see patches of blue sky above so we headed off. We both felt sluggish after the enforced rest day and to make matters worst the road for about the first 20km was absolutely crap - hardly any shoulder and the traffic was a bit full on - I suppose everyone going to work. At about 18km you go over a hill in which the first 2/3's is 8% and the other 1/3 is 12% and it is about 2km long but being in Qld where they don't spend any money on roads I knew the road was going to be winding and narrow with no shoulder ... and I was right! I was okay on the 8% but the 12% killed me and pedalling at 4kph the bike began to wobble and the traffic was not very forgiving and I suppose the road was just too narrow for 2 cars and a loaded bike so I got off and pushed the bike for about 50m but Neil managed to cycle the whole hill - just as we got to the top a window from a 5th wheeler had popped out so traffic was running over that and off course it all flung up at us and instead of the dickhead 5th wheeler owners retrieving their popped out window and clearing the road of all their debri they we conversing with another caravan owner about their tragedy! We got to the top and the view was a little clouded over. 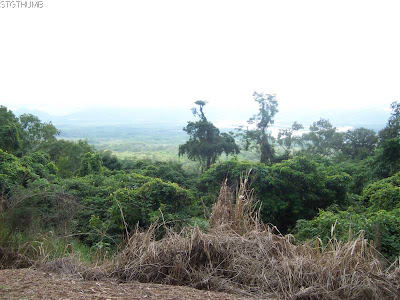 So you couldn't really see the scenery but it was very hot and humid and the sweat was just pouring of us! 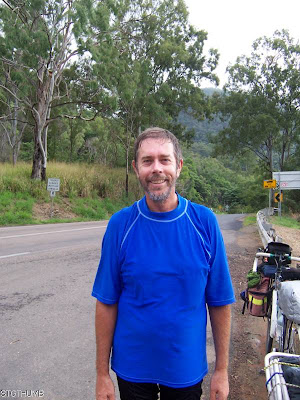 But Neil is still smiling despite the fact that he is sweating the it has made his hair cling to his skull!
We began to descend and we saw a tow truck across the road and a policewoman came running up to us and said that we can go around and that the highway has been blocked in both directions as a car ran off the road the night before and they are retrieving it - so we continued down and at the bottom you could see the cars beginning to bank up and so we had the road to ourselves for around 45mins before the traffic began to catch up with us! It was absolutely glorious to have the entire lane to ourselves and when they did catch up we just pulled over and let them go past us especially when we had no shoulder (which was usually crossing a creek). After the down hill the road became really good and we had a relatively good shoulder all the way to Cardwell. Just before we got to Cardwell we found 4 bite size Turkish Delight chocolates on the side of the road and they were unopened! We got to Cardwell around 1pm and stopped for a little break and a bite to eat. Since the sun had popped out the beach looked really nice! 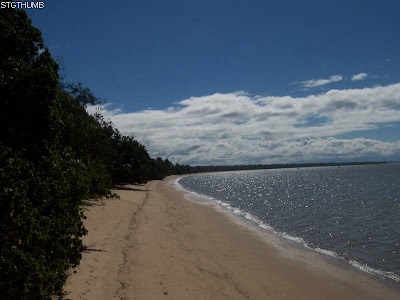 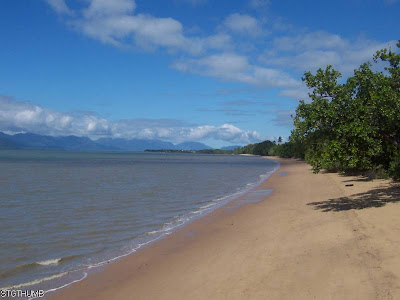 and we will stop there on our way back down. We got a really good view of Hitchenbrook Island (below) 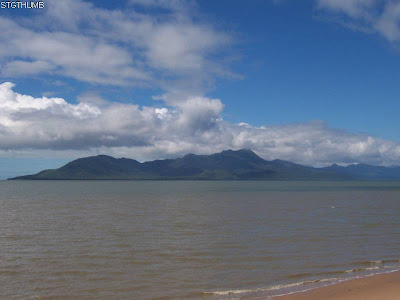 Unfortunately it is a National park so we cannot go there!
So we continued after Cardwell towards Tully and the traffic wasn't so heavy in the afternoon and so the cycling was very pleasant. There are alot of sugar cane fields around but not as much as we thought there would be - but there were alot of pine trees around so we think maybe they do a little of both now since the sugar farming can have alot of ups and downs. 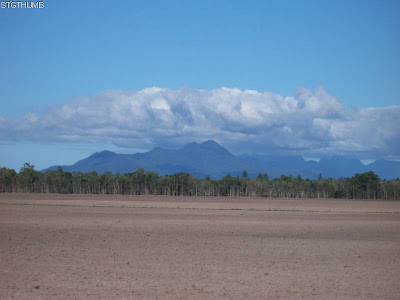 The photo above is of Hitchenbrook Island in the background with a cleared sugar cane field.
Just before we reached our rest area Neil found a whole Mars bar so we think it must have been our day for chocolate!
We got to Bilyana Rest Area and I had my turkish delight. 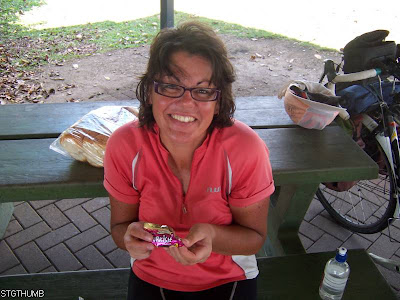 The rest area is quite nice and although it is small it has alot of covered tables so we pitched our tent near one and claimed the table as ours! 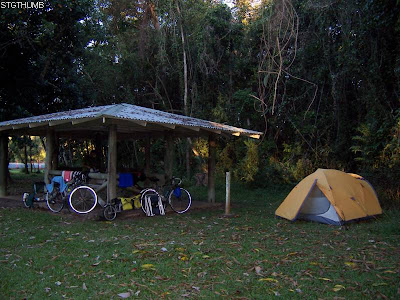 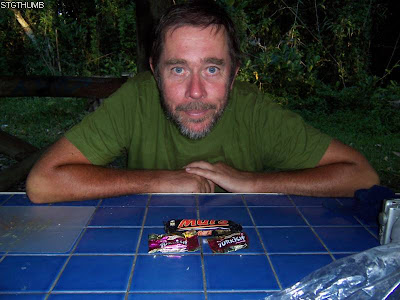 Above is Neil with his booty of chocolate (we had already had 2 turkish delights!).
Bilyana Rest Area to Mission Beach -
We woke this morning and we both had a disrupted sleep last night as the Bruce Highway was exceptionally busy at night more so than what it is out in the outback! Not only that but the rest area is close to the road and also a railway track and with at least 4 trains last night our sleep was a little broken!
We left early this morning and the ride to Tully was nice and the highway had a shoulder all the way but once we turned off to Mission Beach the road became absolutely crap - narrow, no shoulder and rough! The traffic wasn't too bad but there were quite a few that liked to take risks and overtake us when cars were coming the other way! The road is up and down.
We passed through Mission Beach and continued on to Bingil Bay but unfortunately the council caravan park is small and they had no vacancy so we had to take the windy road back to Mission Beach!
So we are camped at the council campground and it is full but quite nice - it is on the beach and our tent is about 20m away from it. The campground is right opposite a 4 and 1/2 star top tourist campground and although we are top tourist members and get a discount somehow I think the council one is still cheaper ... besides I don't think the top tourist one took dogs! The campground is very basic with minimal facilities but like I said it is cheap ($16 unpowered) and there are only one or two powered sites available but there are 2 power points in the kitchen which everyone uses! So Neil and I used our heads and went out and bought a double adapter and while we have our computer on we make the 2 power points into 3!!! or use one point and still there are 2 available!
We think we will stay here tomorrow and I will take a photo of the beach as it is sunny at the moment and I am not sure how long the sun will last ... as this is only 25km from tully which is the wettest place in Queensland and it always rains around here!
We are both beginning to loose weight quite fast and I have already lost a pair of shorts which had a hole in the butt part and it wasn't worth trying to salvage it so I think I will have to replace a few items of clothing ... after 3 & 1/2 months of constant wearing of the same clothes they are beginning to die on me.
It is quite humid up here and hot and I mentioned to Neil that I think he will have to get some deoderant as some days he can get a bit on the nose ... he came back from the shower all smiles ... he found a deoderant stick!
Posted by Janet O'Brien at 2:52 PM