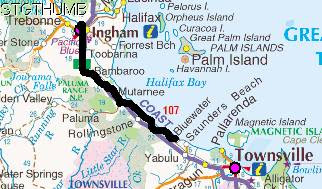 Day 1 - Bluewater to Rollingstone
Just a short day to Rollingstone Rest Area -it was sunny all day and flat riding and marginally less traffic than the day riding in townville! but at least there was a shoulder along the Bruce highway so we could cycle in that.
On our way to Rollingstone we stopped at Bluewater Rest area to check that out and it was full of campers so we will stop there on the way back, but on the opposite side of the road is a gas station and a vege market on so I popped on over and bought some tomatoes ($2.50 a kg!), 3 avocados for $2, a cucumber and a pineapple for $2.50 - man I LOVE QUEENSLAND!!! That is the one thing I was hoping to see here along the coast and that is these vege/fruit market stalls alongside the road (and probably only there on the weekends) where you can get really cheap fruit and veges!!!
We got to the rest area relatively early and just as well as it was like entering a caravan park! it was full so we picked a site and laid our claim to it before someone could move in with their caravan!
Rollingstone has a small postoffice/petrol/general store, a school and this rest area. the rest area is very big and at bedtime count there was 63 other groups in the rest area. It has toilets, outside shower and drinking water so we are staying here again tomorrow.
Below is a photo of me doing my clothes washing in our foldable bucket! 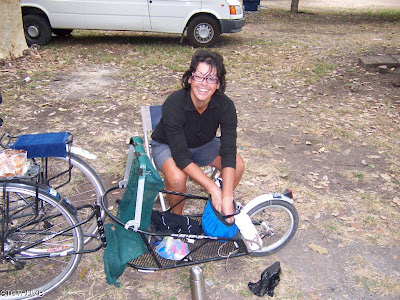 Below is our campsite and if you look in the background you can see my washing strung up between 2 trees! 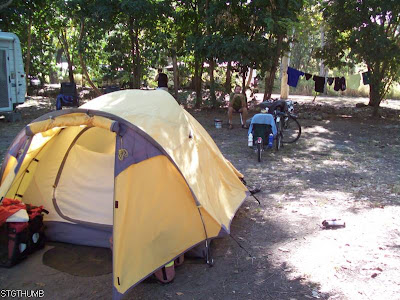 and below is only part of the rest area and you can see it is quite full with all sorts of campers! 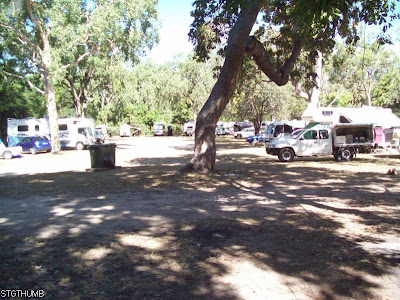 We cut our $2.50 pineapple in half and had the first half for lunch and it was very juicy and sweet! 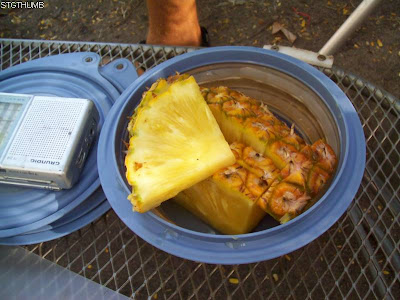 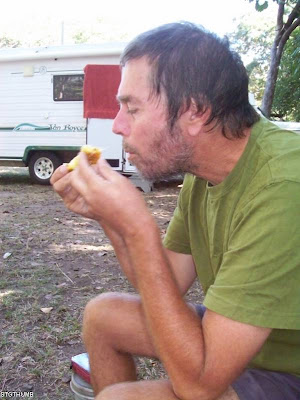 I don't think Neil breathed between eating pieces of the pineapple! He absolutely devoured it!
Alongside the rest area is Rollingstone Creek and it is very clear water and has fresh water. We took a dip in it and although there were no signs about saying beware of crocodiles we did hear that locals thought there was one and it may have been flushed away when the creek flooded! but then some people say there won't be any as there are rocks and then others say that nah there won't be any because they don't like freshwater ... I just wish people would keep their opinions to themselves and admit basically that they don't know!!! It is a bit like the snakes - basically people know nothing really as to where they would be! Speaking of snakes we have seen plenty of dead ones (fresh and old) alongside the Bruce highway! 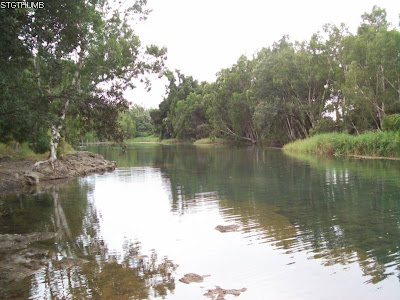 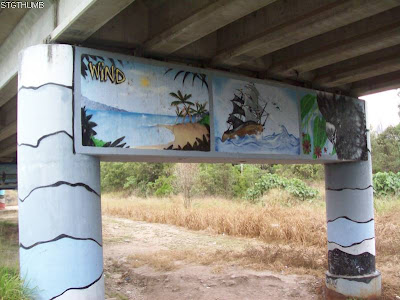 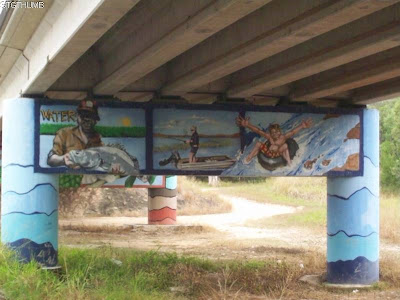 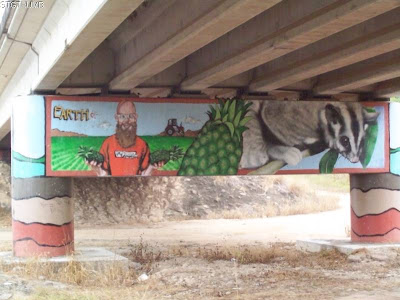 They are very good paintings incorporating the 4 natural elements - earth, wind, fire and water.
So we grabbed yet another pineapple, 6 bananas for $1, corn husk for 5o cents and honey for Neil. On our way back I thought that the man on the earth painting looked alot like Neil! 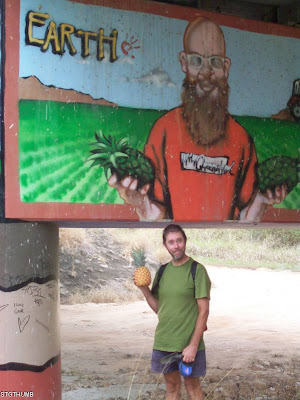 I think there is a strong ressemblance! 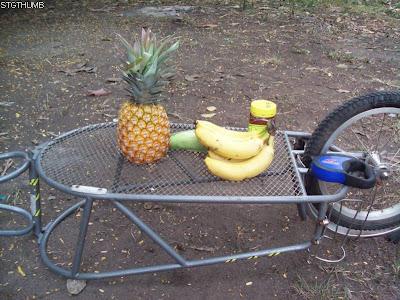 Here is our little supply of food!
We also rode down to Balgal beach which was around 4.5km away. this would be our first sighting of the sea since we left Melbourne! ... exciting!
Neil got very excited about the bird below! 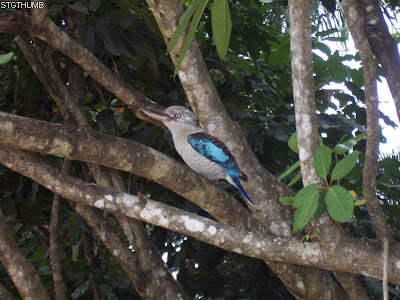 It is a kookaburra and we have yet to look up its official name but the blue on the wings was very striking and we could get quite close to it too!
Balgal beach is quite nice and what houses are around there are basically holiday homes. We also had a look at the free rest area there and it was small and crowded and if you wanted a spot you would have to turn up first thing in the morning and wait for someone to leave!!!
The beach itself is quite nice but off course you can't swim due to crocs and in the wet season they have stinging jelly fish - but they do put up a net for the stingers! 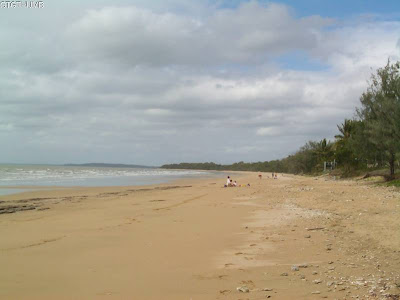 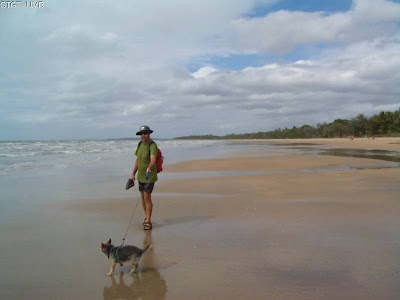 Below is the estuary and I am sure there would be crocs swimming in there! Balgal beach is a popular place to fish in this estuary! 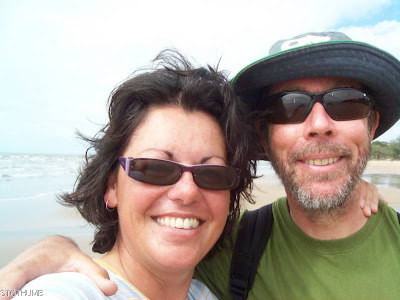 These 2 people look like they are homeless and need of a shower!
In the evening we took Kouta for a walk and during the afternoon locals would come to Rollingstone and have a picnic and swim and fortunately for us someone had left a full loaf of bread on the table so as we walked dog we picked up the bread ... bonus!!! (what have Neil and I become!!!) ... but not only that they people had dropped alot of food on the ground ... no it is not what you are thingking!!! ... but Kouta definitely got a meal out of it - a sausage and a lamb (I think it was!) chop!!!
Rollingstone to Ingham
We left Rollingstone around 8am and the traffic along Bruce highway was constant ... we have become use to the traffic now. Sometimes we had a good shoulder to ride in and sometimes the shoulder was a bit narrow but it was okay riding. the scenery is fabulous - basically we followed alongside the Paluma ranges. We also began to come across alot of sugar cane fields which would mean more snakes - we only saw dead ones on the road but I am watching out for live ones! 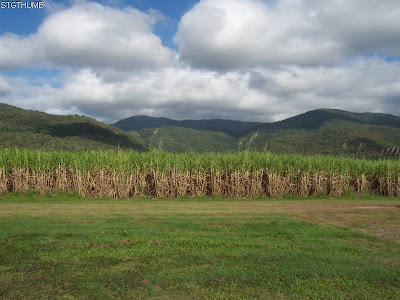 We got to Ingham just on lunchtime and camping along the coast is very expensive so we took an unpowered site and that costs $23 and we are in the town center under the rotunda using a power point we found and below is a photo of me chatting to mum and sharon on skype! 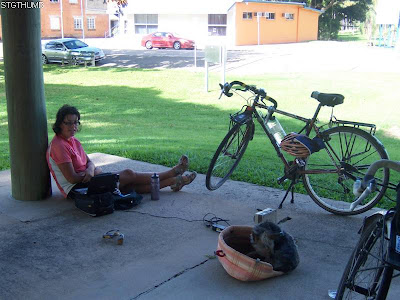 It was very noisy as the highway runs either side of the park but at least I got the chance to say hello and do the blog.
Not sure how long we are here for but our next biggish town is Innisfail and between here and there we will free camp it as at Cardwell they want $30 for unpowered and I refuse to pay that much! Funny inland was cheap camping and expensive food and now on the coast it is expensive camping and cheap food!!!
Posted by Janet O'Brien at 3:19 PM