No we didn’t do 49km today – that is just going by the murray river markers which can be a bit dodgy at times – especially around Bundalong with all the everglades and lagoons – I think the markers are a little wrong on the maps, also not sure which way the markers measure coming across Lake Mulwala – maybe they take the NSW coastline which is a lot longer compared to the Victorian coastline – so we estimate we paddled about 34km (but it sure did feel like 49km!)
So we had a nice rest day on Friday – it was quiet until the evening.  We had plenty of wildlife to entertain us – Kouta made friends with the locals, Neil thought he was a Llama whisperer, lucky the skin had legs as I thought it was a snake at first! And our evening music – screeching Cockatoos! 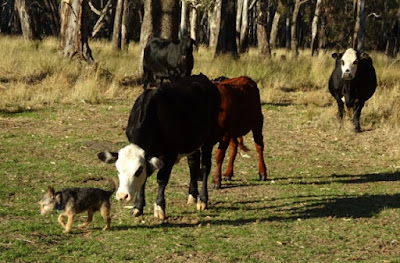 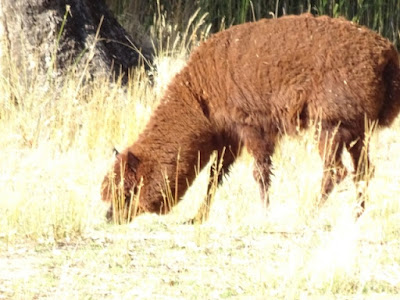 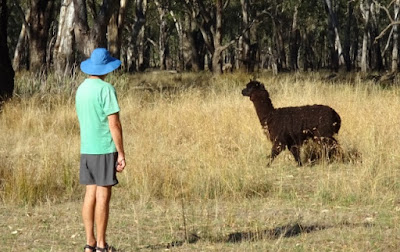 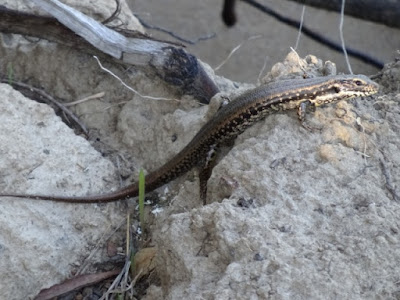 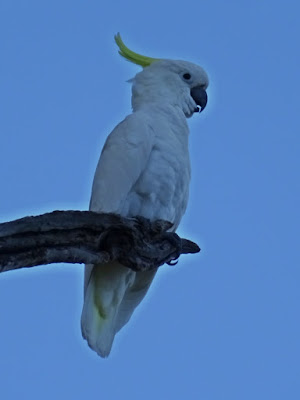 We had decided that we would get up early in the morning on Saturday – well lets just say “we hate people” we had a father with his adult son (and his friends) as well as 2 younger kids camp a beach up from us – that was okay- they had their 2 speed boats and toys etc, that is okay but it wasn’t at midnight when they decided to play their music up loud until 4am in the morning – they were drunk and Neil wouldn’t let me “deal” with them.  So they were quiet until midnight and then all of a sudden they played loud music.  We put up with it and woke up a little later than expected – 6.15am so we didn’t get away until 7.45am.  We were very tired and our eyes were very heavy – crikey I couldn’t even get my revenge in the morning.  Our day did NOT get any better.  Due to a late start the ski boats were already up and about and all over the river so for the first 4km we battled wake after wake after wake then we get to Bundalong and the foreshore is crowded with campers and more speed boats, by now I am over the so called ‘struggling middle class’ with all there toys.  I knew the weekends were going to be difficult and this weekend is tough. 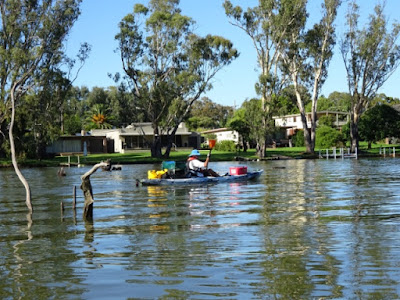 This area of the Murray before you go into Lake Mulwala has wide areas and good corners for water skiers and the like so it is very popular – next time I wouldn’t do this on the weekend it is just too difficult and distracts from the peace and quite!
Around Bundalong it is an absolute mess of water- you don’t know where you are and there are so many bodies of water you have no idea if you are on the murray or not.  To get away from the speed boats we did take a few short cuts through quieter waterways – I was navigating and our maps are good but things change like islands appear or disappear, waterways are closed off or are new and sometimes there were times I doubted my map reading skills however we got there! 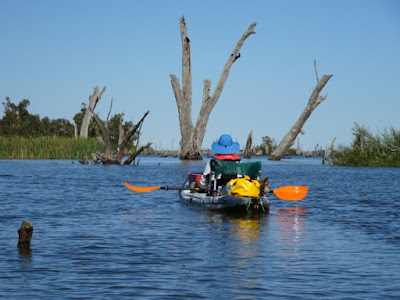 On the Spatial Vision maps there is a campspot just on the edge of the lake and a jetty near by- this campspot is quite good – nothing fancy about it but okay for kayakers (it is near a broken down pontoon jetty) perfect if you want to start you day off crossing the lake.  In hindsight we should have made for this camp spot.
So as you know Lake Mulwala has nothing but sticks poking out of it!  Here we are in it … 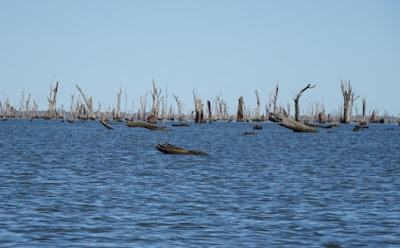 And here we are saying ‘are we there yet’ so Yarrawonga is somewhere where the point of my kayak is pointing! 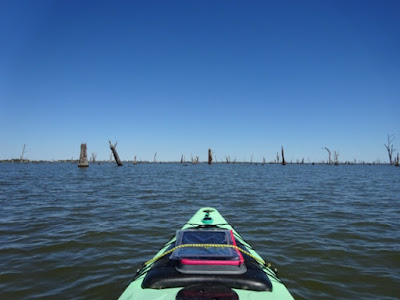 We followed the Victorian side, however we did cut across the bay to make it a little shorter and also it was better to be out in amongst the sticks rather than in the boat channels!  The trees sticking out of the water are easy to navigate … it is the ones just below the surface you have to worry about! 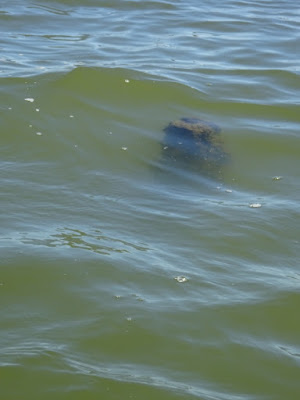 I think I got one and all it did was move the kayak aside!  It took us 1 hour and 30mins paddling time to get to our first land fall which was at Woodlands Park – there is a little beach right next to the jetty.  Nice spot until all the struggling middle class and their boats start up and create a wake that spun my kayak around, beached it and the water from the wake just poured into the kayak, it flooded it completely – event the compartment that had my camera in – see told you my day wasn’t going well!  BUT I had put the camera in a small container and that protected it from the water and the container was under the water but the inside was nice and dry!  Whew!  So not happy – this was the 2nd time today this had happened (it happened at Bundalong  - same thing wake spun the boat around onto the beach and the water just pours in from the wake).  So by now I am ready to thump any male under 25 with flaming tattoos on his arms, I mean really, it is great that Australians get out and about with recreational stuff but do they have to do it when I am around!!! LOL
So once pass Woodlands Park it is another 5km (loooooooooooooong kms!) to Yarrawonga, there are more boats, jet skis and fishing boats and now add a house boat, and tourist boats to that mix, so it gets quite tough out there in your little kayak.  The swell is also bigger – Neil thinks it is the water bouncing of the banks as it go really big as you get closer to Yarrawonga. 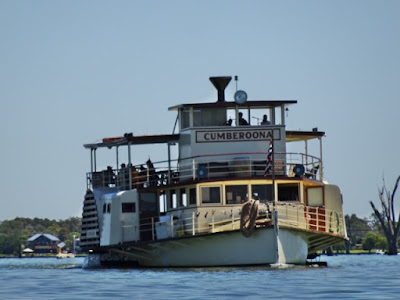 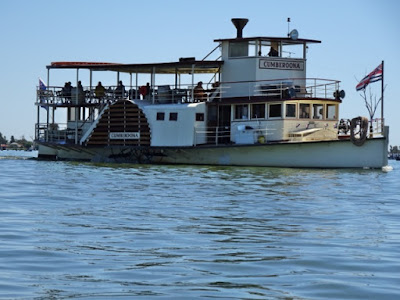 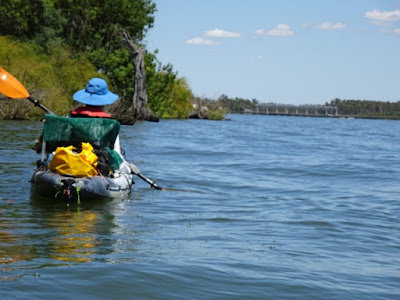 Then you see the town and the bridge where the cars go over. Not knowing if there is really any where to beach or land the kayaks near the weir (as there is no locks so you have to portage) so we try our luck and go under the bridge 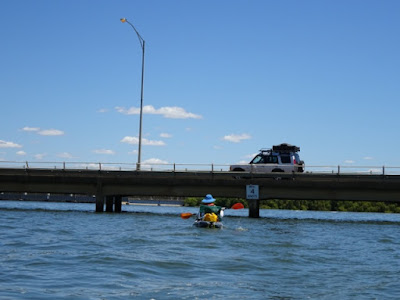 And start paddling to the weir itself 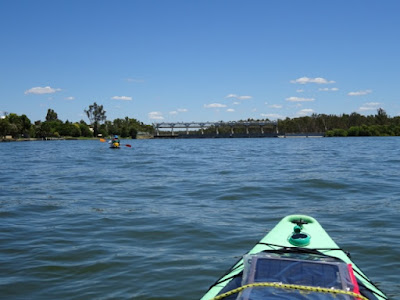 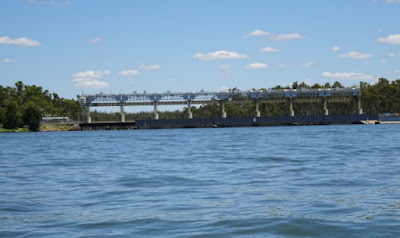 So we paddle up to it and the track is steep for our heavy laden kayaks – ok if you have very little gear.  So we make the decision to turn around and go back under the bridge and beach near the information center and make the long portage from there.  Going back we see a guy in his back yard (which backs on to the waters edge) and he flags us over and offers to drive us around the weir – I mean this guy in an instant just put my faith back into humanity – I mean after the arrogant sods last night and their music and the damn struggling middle class and their toys I had lost all faith in humanity!  We said that we have wheels for the kayaks but driving our gear around would be great!  Apparently he does this a bit as like most kayakers we think we can sneak somewhere through but more to the point there is no real info out there as to what is the best way to portage, back around the info center is the looooooong way and you may have to make several trips (3km round trip at least!)  So there is a vacant lot and he drives his 4WD down and we load all our gear in there, he drives me to the bottom of the weir which is through the caravan park (just past the office turn right and down the boat jetty (it is public thorough fare and boat jetty despite it being in the caravan park)).  We undload the gear and he drives back and walks with Neil who has the first kayak and then returns back home with Neil to pick up the 2nd kayak.
Their names are David and Ros and they are the most lovely people and so friendly and love to help out kayakers who get stranded!  Acutally on our rest day there was a fisherman anchored near our camp and he began chatting to us and he offered his son and his ute to portage us!  So I think if you put on a sad face someone is sure to take pity on you! 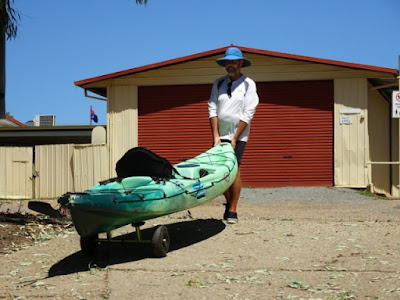 So happy that our portage was fortunate – hard work for Neil to wheel the kayaks to the boat jetty so I did the walk to the supermarket – it felt strange to wear sneakers and walk!  The IGA is well stocked but expensive.  Walking back it is hot and sweaty and I have in my backpack 2 flavoured milks which we devour when I get back. 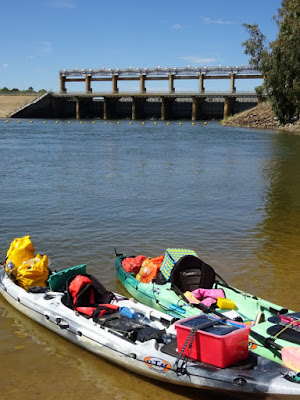 It is late and we start paddling again at 3.45pm – it took us til 5pm to find a spot and we only went 5km down the river.  Our problem is not lack of campspots – it is lack of spots available – they are all taken up with weekenders and it is chockas along here and if you do find a spot it is too close to a noisy group with a damn speed boat and music, we are so tired and worn out that we find a shady spot at the end of a long row of campers – this spot is vacant as it is near a water pump that is noisy – not as loud at the music last night but it is a constan low hum – I think we will sleep through that! 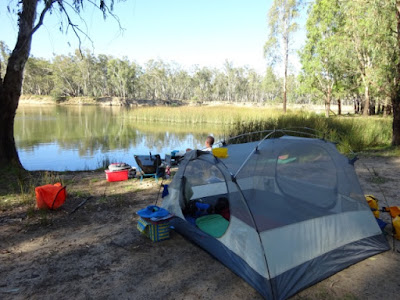 So in hindsight – don’t do this lake on a weekend – try midweek.  In the future I think we might revise our weekends and if we are going to be in a place like Echuca or someplace popular we might either speed up or stay put.  I think we will be ok once past Echuca!