Not sure what the temperature is today but it is hot up here in Cobram - around the mid to late 30's I think.  I am posting this from Cobram and have left todays end km open as where we were going to camp (beside the road bridge at Barooga picnic area) you use to be able to free camp but that has gone now and everyone is in the state forest so that is no good for us, so we are in the picnic area on the Victorian side and Neil has gone in to get some food - it is a 2km walk to woolies and that is a long walk to get all our supplies - I told him to get a taxi back.  Once back we will paddle off again - not too far as we are very tired and weary and it is hot paddling.
So our campspot was lovely last night - so quiet - we had a few guests - 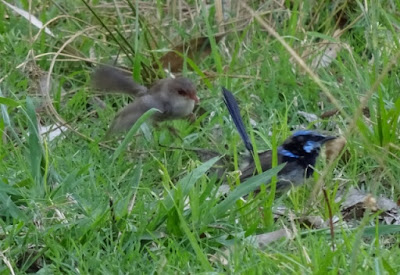 these little fairy wrens were everywhere and always in pairs!
Here is Neils cup for the trip - not long after we started his silicon cup got a puncture in it at the bottom so it was leaking chronically! so we improvised (as we were in the middle of nowhere!) and he is using the container that we keep our trangia burner in!  we put the burner in a snap lock so no metho leaks out and taints his cup! 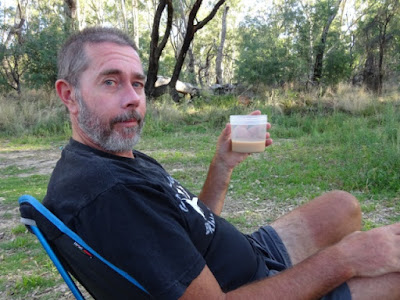 I also have to show you our suntan lines -  been gone just over a week and already we have funny suntan lines! 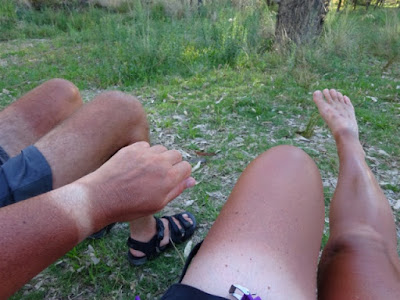 starting from the right is my leg - on my foot you can see brown dots - they are from the holes in the crocs, then my left leg, then my left arm which has a watch mark! and then Neils legs!
Last night we tried sleeping with the fly of the tent - which was a mistake as we both got no sleep as we are so use to being in our kennel that sleeping in a kennel without a roof felt strange - we were also sleeping unside down - which doesn't help so in the end while it was nice to look at the stars it is better we stick to what we are use to!
This morning we set out and just around the corner was a wallaby drinking - he didn't see us at all! 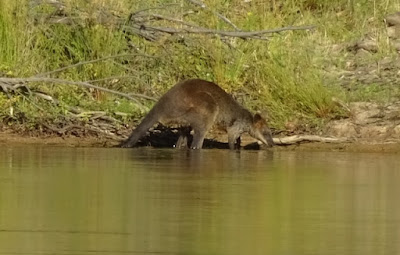 then I started seeing birds I hadn't seen before and there was one type in particular - it was black on the back and had a white front - I was having so much trouble photographing it that when I thought I had it I hadn't!  I managed this one - not sure what it is maybe a comret (spelling?) 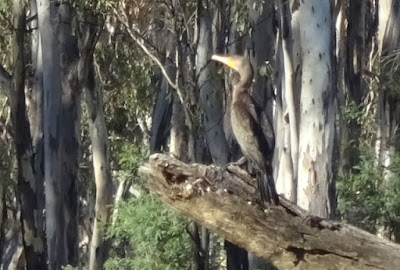 the river is particularly wide and flow is limited 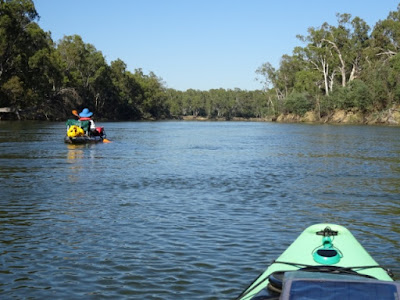 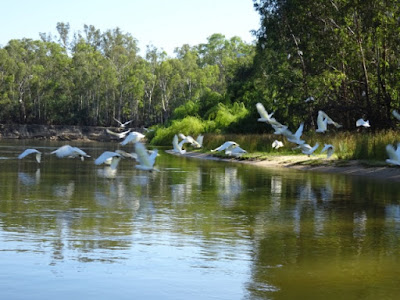 plenty to see along this part of the murray - more birds compared to some areas and also a little bit of Murray art ... 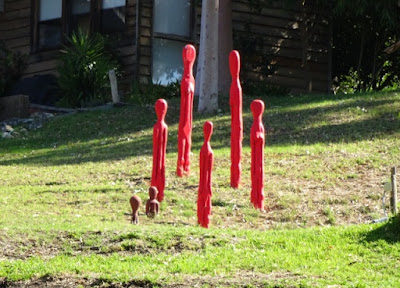 neat aye - we assume as the family grows they keep adding more people and as they grow older they also get taller!
Finally I managed to get my black bird! 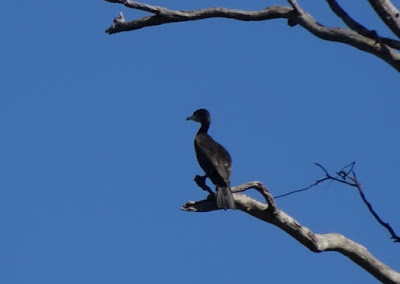 We did pass Cobram Estate homestead and only managed to see the chimneys as tall trees are blocking you from seeing the house, you could also see a little bit of olive trees.
We did pass what was Jarn pirr vineyards but it is now part of Seppels and I tell you this is by far the biggest water pump so far along the murray! 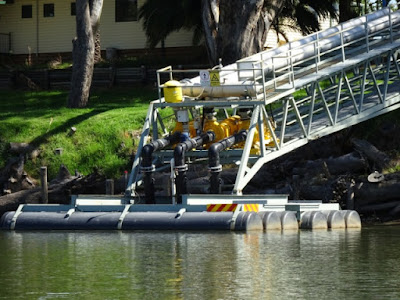 so still alot of people around but they are dotted here and there, we passed some big beaches on the Victorian side and if you read last nights blog about some leave rubbish behind and we can't figure that out as they have cars to carry it out and generally that is the policy for the river ... well most when the leave their rubbish behind place or hide it behind a tree, today we passed a big beach and this was left out in the open ... that pisses me off to no end!
About 5km frm Cobram I am getting tired and weary and out of the corner of my eye I spot a movement up a tree and I look and I see something brown up in the tree and shit it is a Koala, so out comes the camera, I stop paddling but I continue to go with the flow and I am missing my photograph opportunity and I drift by and so I quickly paddle back but find I can't stay put so I wedge the kayak on a snag and I am still drifting off so I decide to hoist my leg over this snag to stop any movement and quietly sat there photographing and admiring this big koala while it slept - meanwhile Neil had paddled back as it is strange to see a koala along here I think - I don't think it is common? (Neil has informed me later on that Koalas are common, he has been told around Tocumwal) 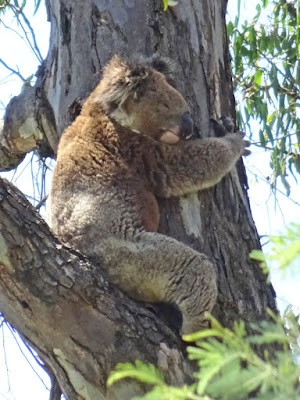 anyway it was unperterbed by us and I don't think it knew we were there!  So this got my spirits up for about 3km and then the final 2km just dragged on!
Here is the bridge that bridges Cobram in Victoria and Barooga in NSW 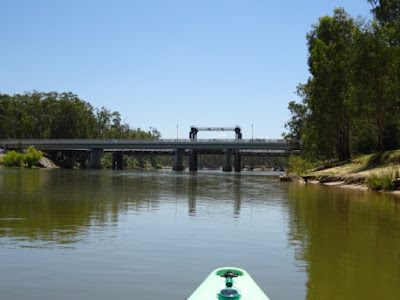 will go fill up with water now as I am still waiting for Neil.
Okay so I am back now, we headed off after a quick dip in the water to cool off.  We are paddling along and the Victorian side is quite crowded - we think it might be a mixture of grey nomads and also seasonal workers or even the more disadvantaged people that are camping along the riverside.  I say disadvantaged as there are quite a few permanent tents along here, most have a great set up and some are just in their cars and tiny tents no bigger than ours.  I would imagine the wine grape picking would start up soon if it hasn't already started.
We did find a spot and you are not going to guess where we are ... NSW!!! we think it is still the state forest as it is most definitely not grazing or crop land.  we found a beach that clearly had been occupied on the weekend and it is in shade for most of the day except for early evening but that is okay as tomorrow we will stay here.  There is even a tree close to the water line and you can wallow in the shallows of the water while under the shade of the tree - it is divine especially for tomorrow as it will reach the mid 30's again.
Posted by Janet O'Brien at 2:30 PM