Yesterday afternoon after I posted on the blog it rained and the temperature suddenly dropped that we were debating whether to get the jumper and trousers out … the jumpers definitely came out but put up with the chully legs!  It drizzled and rained a bit for around 2-3 hours and then it passed and the sun came out and my washing dried.  It was still cool – around 18 degrees but pleasant enough to sit outside after dinner and watch the river flow and listen to the sounds of cattle, birds and cicadas! 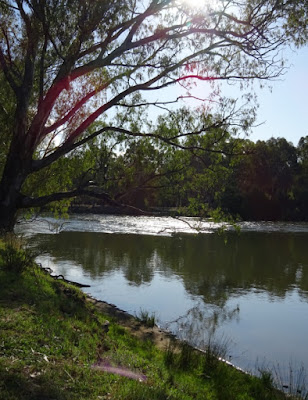 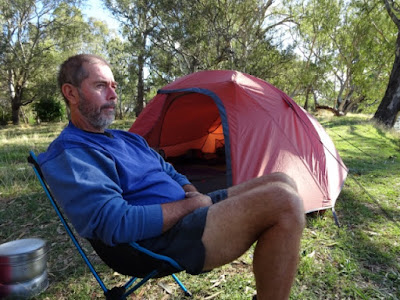 A slightly later start this morning – bit of faffing around and then 5 small boats on the trot came hooning around the corner and created a wake so we had to go down to steady the kayaks – water lapped up and in my kayak so I had to bail once all the boats had gone …. Once again (like on the last trip) not one of them was wearing a life jacket – you know this river has a strong current – one I cannot swim against and I think I am an ok and competent swimmer and also most definitely not anchor myself in the sand to stop it from sweeping me of my feet – so if any of these fisher people fall in … well good luck to them!  Something that did disturb me later on in the day (while I am talking about life jackets) – while at our 3rd campspot a small boat with dad at the front, a young boy about 7 in the middle and a young teen about 13/14 at the back driving … not one had a life jacket … dad, yes that is fine not having a life jacket he is old enough to decide but the 2 young boys not having one … NO way that is just terrible.
So, had my rant, onto todays kayak.  Same old, same old not very eventful today, kouta didn’t jump/fall in, no wallabies or kangaroos, although we did see a little colour today – an azure kingfisher 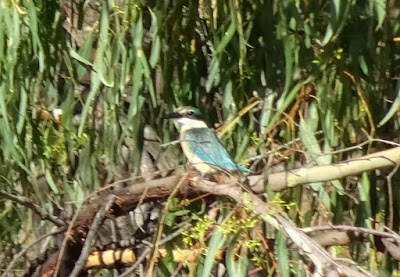 I did take a photo of one in our last trip and that was a bright blue bird (hence the name azure) but this one is a little dull – maybe a female or a juvenile.
One thing we did see today and that was a bird of prey, a kestrel, have a go at a duck! We have never seen that before.  Neil said the duck was flying and the kestrel flew down and attacked it and then the duck went into the water and popped back up, shook itself (and probably thought what the heck just happened to me!) and flew off! Ha we couldn’t believe it, at first I thought the duck was under the water and the kestrel mistook it for a fish and swooped to pick it up, had a go to pick it up and realised that it wasn’t a fish! But no the duck was definitely flying Neil said.
We did make good time today and the river was quite, even along the embankments there was not many people around, admittedly when I look at the map there are no roads to get to the river (it is all private land with not public access) but where there was a road to get to the river there were only one or 2 caravans – a great spot at Doolans bend (2140km) but not where the official campspot is but around the bend there is a little branch off the river and that leads to a wonderful small beach for a kayak, mind you you have to pass a caravan to get to it so we stopped on the NSW side for a cuppa!
Realising we are not that far from Howlong we decided to camp 10km from it and we found the perfect spot around the 2135km mark.  That leaves a short day tomorrow to Howlong and if we don’t like the free camping there at that Lions park we can pick up some food and carry on.
Our spot is right on the river, the embankment is only about 1m above the river and according to our markers the river is slowly getting higher!  We spent the afternoon lazing about as the clouds are building up, a few birds around and this is a lovely white heron that was hunting for food along our foreshore! 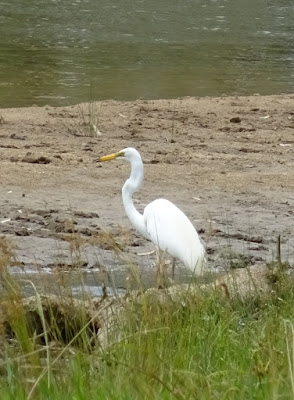 Since we will be around people tomorrow I decided that my legs need a shave – not having a shower for 3 months I can deal with but not shaving my legs for 3 months society can’t deal with that!  So I got out the solar shower to heat up some water and after 2 hours in the sun the water was lovely and warm 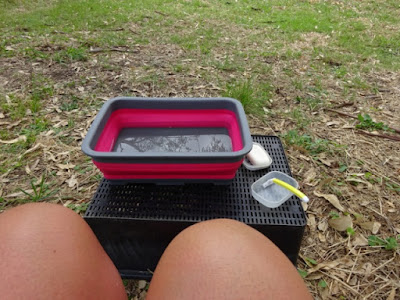 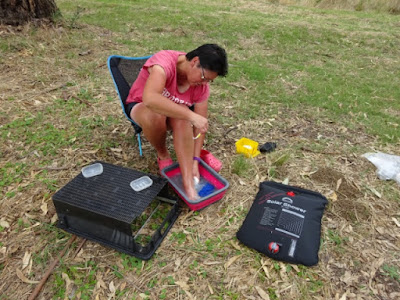 Ha while I did that Kouta was in recovery mode … 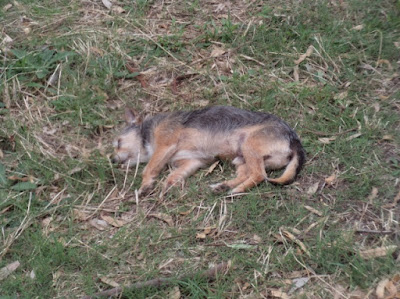 So here is our campspot, which is out in the sun as the only shade around is under gum trees and never camp under gum trees – we heard and watched another massive limb fall today! 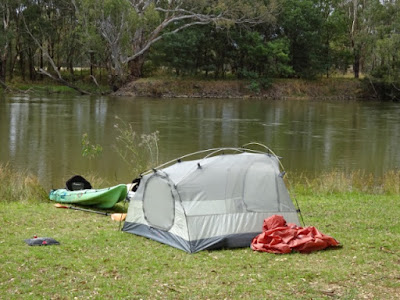 And here we are set up under the tree line in the shade. 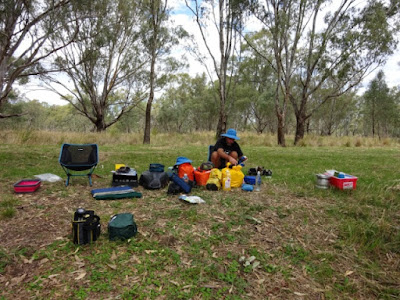 We had terrible internet reception yesterday, very slow at uploading the photos so I am posting here at Howlong.  We slept in this morning  knowing we don't have far to paddle.  It rained heavy last night around 9pm but we all fell asleep to it so it wasn't too bad.  We woke to a grey sky and had a later start (only by about 30mins!) It is a little cool in the morning but once paddling you soon warm up.  About 5km along it began too rain and it rained quite heavy, enough that the kayak surprisingly filled up with water quickly, not enough to force a stoppage and start bailing but enough to form puddles.
By the time we got to the Black Swan anabranch (branch of the murray) it had stopped but it was a bit breezy and once you stopped you quickly got cold.  There is camping at the Fig Tree Common but the embankment was too high and there was no where to put the kayak, so we decided to go up the Black Swan river about 500m which felt like 5km as you are going against the river flow and it felt like you were getting no where or doing the moon dance (more like moon kayak) and paddling and staying in one spot.  Eventually we get there to the Lions Park which is just next to the Leahy Bridge and it has free camping there ... but unfortunately where the ideal spot to beach the kayaks and camp is no camping, you have to go further around the corner  to where the caravans are and there is no where to beach the kayak or even park it to unload.  So we have decided to pick up a few supplies, have a fish and chip lunch and continue on to find a nice spot to sit out the afternoon and have a rest day tomorrow.
I had an idea this would happen so I didn't pin my hopes on this free camping spot.  I am hoping the skies will clear, just had a small shower and now I see blue sky, will check the radar.
Not sure how far up the river this internet will last so you may not hear from us until Corowa - approximately Wednesday.
Posted by Janet O'Brien at 11:27 AM