And we are off! after some planning and not much training we left Bayswater yesterday morning (wednesday) and drove to Albury/Wondonga with Neils folks in tow as they are the ones to drive the car back and hopefully in another 3 months or so pick us up at the end! 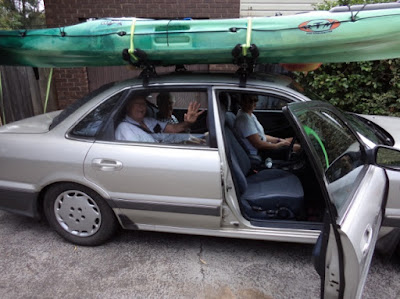 So we had a pet cabin in Wodonga and it was nice but a bit cramped with 4 adults and a wee dog ... kouta was just beside himself and very unsettled ... not sure if that is him being him or him being a senior!
We cased Noreiul park in Albury as a suitable starting point and basically there are 3 parks right alongside each other and there is a concrete boat ramp at Hovell tree park which is near where we started - the boat ramp was not suitable but about 50m before it is a little beach suitable to sit the kayaks in to be packed 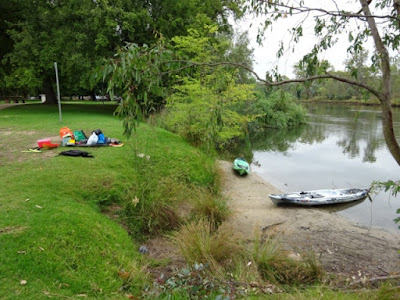 so some how we have to pack this (including the dog!) into and onto our 2 kayaks! 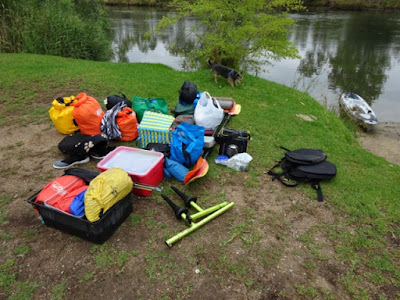 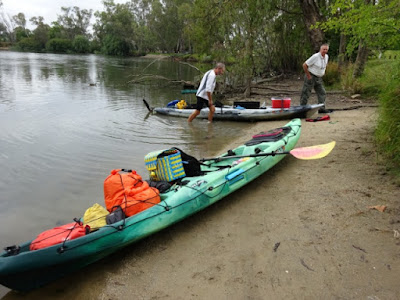 it is a bit time consuming to pack but once everything is in its' correct place we won't take long each morning.  As you can see it is a cloudy day - no wind and somewhat humid for Victoria ... dad it IS 29 degrees and it feels like Melbournes' 42 degrees!  Since there was still moisture in the air is was a little sultry and sweaty to begin with! 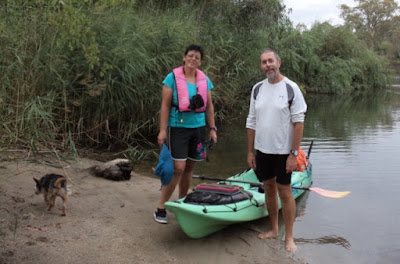 here are Neils parents farewelling us ... I think Ray was more excited about this trip than I was!  He was bouncing off the walls right from when we left Bayswater! 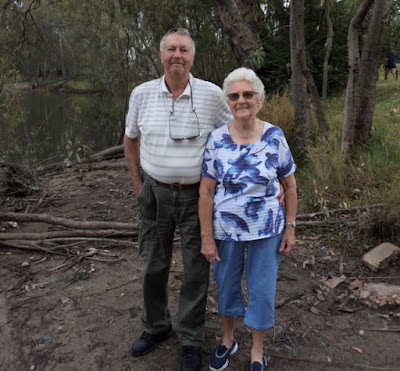 So we are off - no markers to say what km we are at but as a guess I think it is around the 2196km mark. 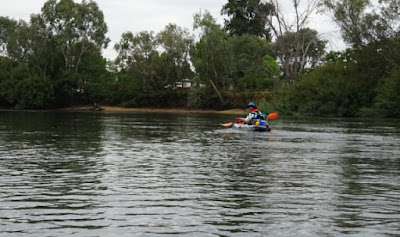 here is Kouta and he is happy as larry now .... ha take note of this smiling dog face because later on he ain't smiling .... lets just say that after 16 years of having him we now find out that he CAN swim! 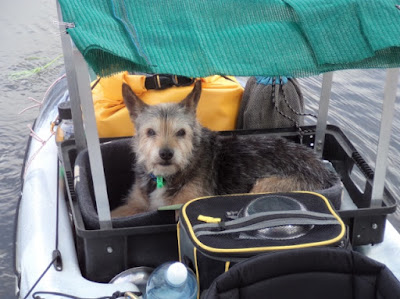 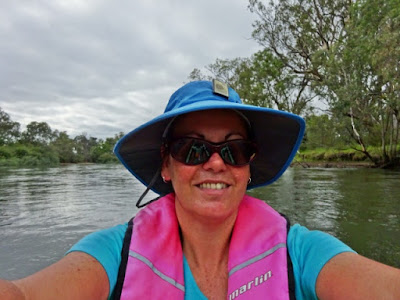 have a look at the top of  my hat Sharon and you will see something familiar!  This is my kayak - and yes I do have a pitcairn island basket attached to my seat - fantastic it is! 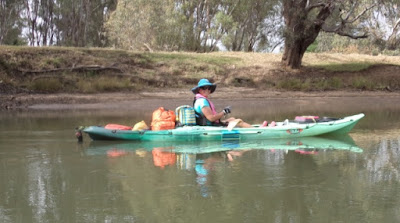 and this is Neils set up - Kouta looks very grand under his sun shade! 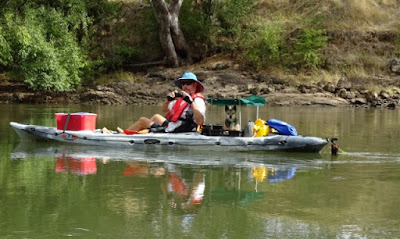 so I was playing around with my camera to see how far I could zoom in - especially with birds in the trees and I did manage this one, which was a bit like I can't see if it is in the photo but I will just point the camera, zoom and click and hope that it comes out! 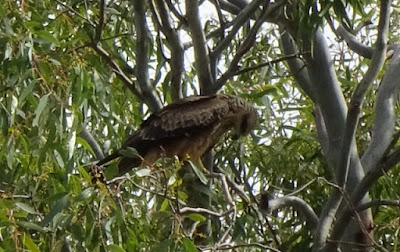 beautiful bird of prey which we see alot as they circle the tree tops - we think eyeing kouta!  And here is Kouta sitting comfortably watching the world go by ... 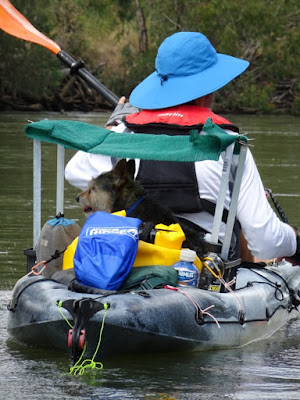 oh and here he is again - this time not watching the world go by but by the look on his face he ain't happy at all ... here is the story ...
so paddling along we hear this splash andI look and see something bob up near Neils kayak and at first I think shit it is a massive murray cod poking its' head out the water and then I hear Neil say Kouta!  so my next gut instinct is to get my camera out and this was followed immediately by another thought of oh maybe neil and kouta might need a hand getting kouta back in the kayak!  so since we didn't know if kouta could really swim I thought better off and decided not to get the camera out until Kouta was safe in the kayak! 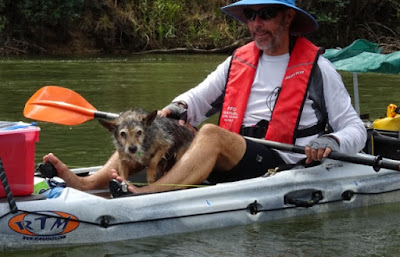 so it was koutas head that bobbed up from under the water (not a murray cod!) and while Neil was paddling backwards to get kouta kouta was dog paddling to Neil - so kouta does swim!  As for why he was in the water ... we don't know!  Either the idiot fell in when he leaned over too far or he decided to relive the Lake Lilydale episode to see if he could walk on water again!  I am so mean as I am rolling about laughing while typing this ... it was hillarious and I so wish kouta could talk to explain why he decided to jump or fall in!
So after dragging him in the boat we pulled over for another good laugh and for him to dry off while we had a cuppa and something to eat.
Paddling along the current is swift at times and we think it is about 2-3km per hour so we could float a bit if we got too tired.  The clouds broke and the sun came out and towards midday it was beginning to get real hot and doing a kouta (throwing ourselves in the water) looked really inviting.
We guess we are about the 2176km mark according to the map we have and we decided 20km is enough for day one and we came across a nice looking beach with a camp area 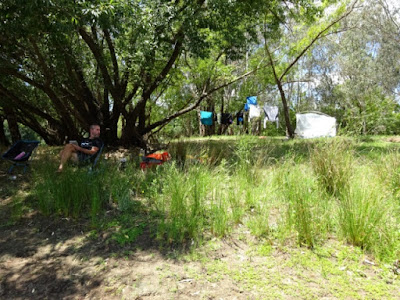 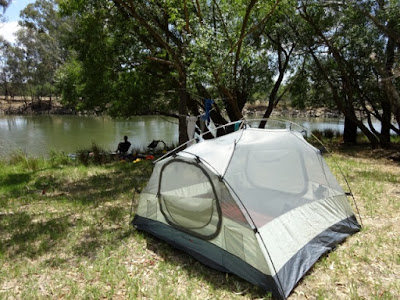 and most importantly a tree to sit under to give us shade.  Fortunately there are these trees all the way along and they give off good shade - don't camp under a gum tree as a branch has just fallen from a gum tree about 200m away - there was an almighty crack and then a kerr-plonk!
So we have spent the afternoon lazing about and the went for a swim to not only cool of but also rinse off the sweat.  Officially this is day 1 without a shower - my goal is too get to the end without a proper shower in a campground shower and just rely on the river and a solar shower!  in the words of my 3 year old nephew ... boo dink!
Posted by Janet O'Brien at 3:30 PM