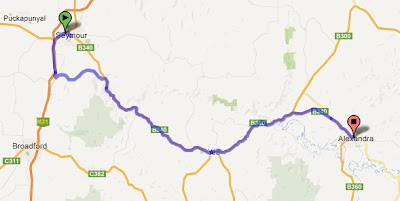 SEY﻿MOUR TO ALEXANDRA = 85km (via Goulburn River High Country Rail Trail - GRHCRT)
ALEXANDRA SHOWGROUNDS =  $25 (powered)
It has been a long and very hard day - all 3 of us are very exhausted.  It took us over 6 and 1/2 hours to ride the 85km of which 75km was on the Rail Trail.
My day didn't exactly start great as I woke around 2am with hayfever and didn't really get back to sleep until after 4am only to wake again at 5.30am.  So we got up early and was out of the park around 7.15am.  We rode along the Hume for the first 10km and then took the Tallarook turnoff.  Like with most Rail Trails here in Victoria the start is exceptionally hard to find in a town, for some strange reason the rail trail developers tend to think the only people who will use is will be locals and therefore don't need to put up any signposts anywhere except for some vague street signs pointing in the general direction.  We finally found a rather miserable looking starting sign ... 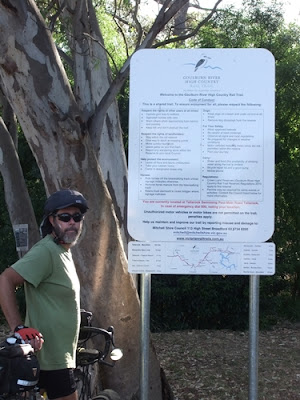 There a nice introduction to the rail trail and you have a quick short climb out of Tallarook and then a nice down hill to the valley floor.  Heaps of monarch butterflies flutter around you as you ride along as they are sitting along the edge of the path on all the leaf litter … I nearly had to put my fly net on and call it a butterfly net as they kept banging into the face – they are far more pleasant compared to flies!
﻿ 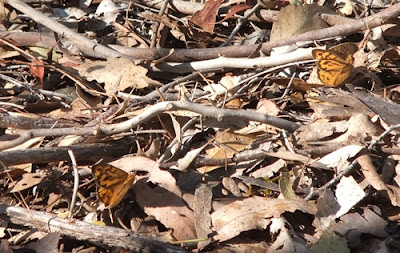 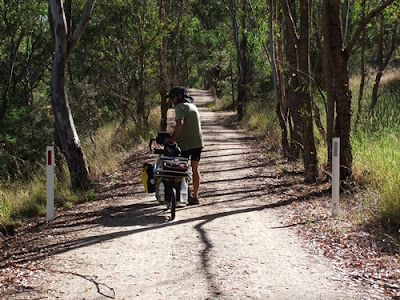 Great scenery along this trail ... 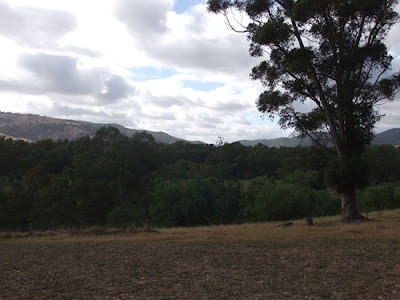 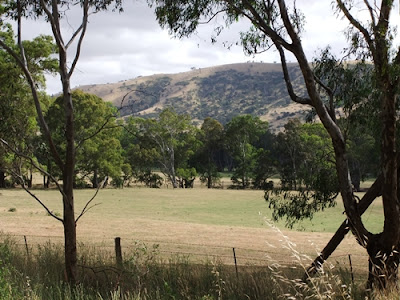 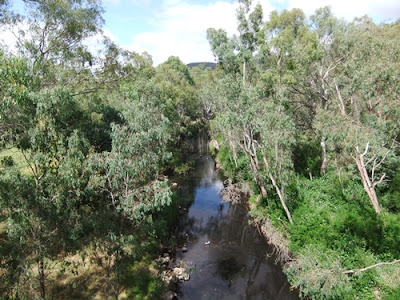 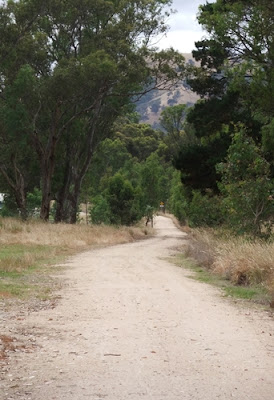 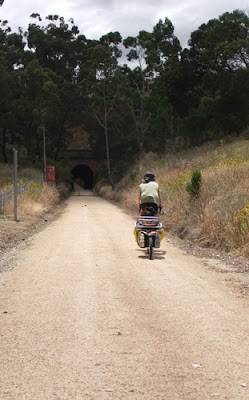 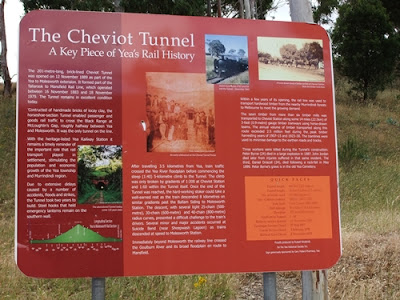 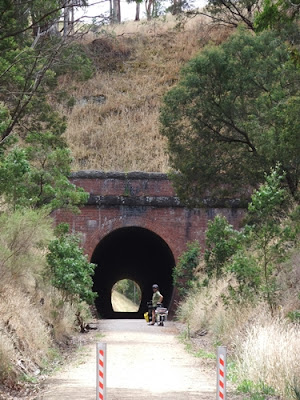 looking back in inside the tunnel which is about 201m long 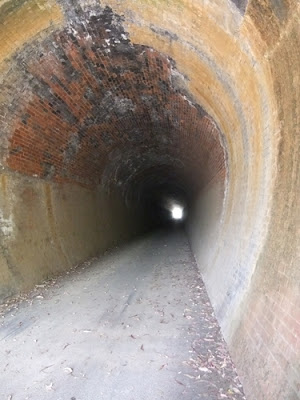 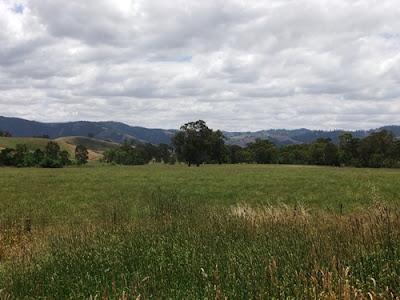 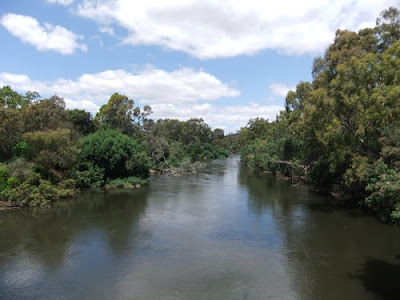 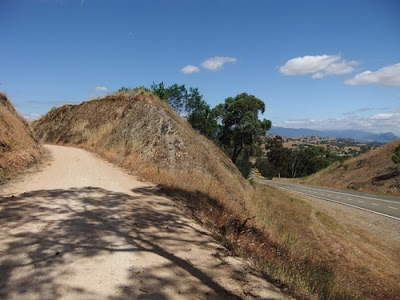 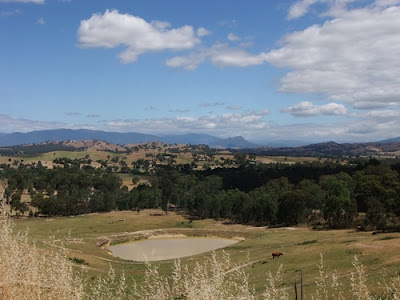 In case I forget my notes on the trail here are just some of the important ones for you Dad:﻿
Start at Tallarook 0km
@ 6.4km shelter, no toilet, 50m from river (over the fence), okay to camp but next to quiet road.
@7.7km toilet with rainwater, next to road, okay to camp
@ 13.7km Granite siding and Trawool Resort – toilet with rainwater, not good to camp, from here to Kerrisdale it is quite undulating and steep in places as they don’t necessarily follow the original train line.  From Granite to Kerrisdale the trail is undulating.
@ 17.7km shelter with table, okay for camping, close to road
@ 19.6km Kerrisdale siding – toilet with rainwater, not good for camping.  From Kerrisdale to Yea the trail flattens out a bit.
@ 32.7km Homewood siding – toilet with rainwater, close to road, okay to camp, from here to Yea it is a gentle down hill and what they would describe as black gravel sealed trail
@ 38km Yea township – follow rail trail signs to a park and it begins again on the opposite side past the siding and shed, from here there is a gentle 9km hill to Cheviot tunnel
@ 44km toilet with rainwater, okay to camp under pine tree, farm sheds nearby
@ 46km Cheviot siding – table and shelter, nice view
@ 47km Cheviot tunnel, this is the top of the hill and from here it is 8km to Molesworth of which 5km is down while the remaining 3 is along and down a bit – despite only having 5km of down hill the remaining 3km has some steep declines as they don’t follow the original train line
@ 55.5km Molesworth siding – toilet with rainwater, okay to camp
@ 60.1km Cathkin siding – toilet with rainwater, not great for camping
@ 60.5km the turnoff for Alexandra, this track for just over 9km (the hill part) is black gravel sealed trail which starts off okay and towards the top can get quite rough.
@ 69.8km top of the hill and trail changes to lilydale topping
@ 72.5 bottom of hill, small climb for about 1km and then down into Alexandra
@ 84.2km end of railtrail – town center is a further 1.2km on.
Overall – the rail trail sure beats going along the busy road (especially on the weekends).  We came across some riders at various places – some were weekend touring, some where groups out riding and some where families.
There is not a lot of storm damage but at times there was some deep bike wheel ruts and lots of them of which they are now dry so your wheel sometimes slipped into the ruts.
Like all towns, at Yea, it can be easy to loose the trail, you end up at the park with numerous tracks going everywhere but up and with the siding and some sheds, the trail restarts at the opposite end of the park from where you enter it.
The trail has markers every 5km.  Only one mistake on the official rail trail brochure – it states toilets at Trawool – but there isn’t they are at Granite which is just 2km further on.  Trawool is just a siding nothing else.
﻿
Posted by Janet O'Brien at 8:54 PM