OMG we are in Los Angeles!

Okay it is just me with part of the family in Anaheim California.
So excited to be here with Mum, Sharon and Caleb.  So this will be a short post as there is not much to say really.  We left Auckland on the 3.45pm flight (air nz) and a mere 11 hours later we arrived in LAX.  None of us got real sleep, maybe a little bit for Caleb but funny how all of us can fall asleep sitting up in a chair in front of the tv but none of us can fall asleep sitting up in a plane!  So here we are about to disembark and head for passport control ... 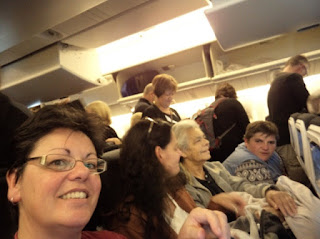 so this airport is massive but funny enough there was hardly a soul around as we walked from our gate to the passport control ... about a 10 mile walk!  So you could go through the machines if you have esta (which we have) and also have been here to usa since 2008 with the current passport - so this discounted all of us so we had to line up with the 400 others as there was another asian flight which landed just after us, so we are very tired and the lines are 100m long and 4 lines deep and it was like being at a supermarket - only 2 checkouts open!  fortunately once all the machine passport people are through we managed to be processed quicker as they opened up more checkouts for us.  So we all had to have our finger prints done by machine as well as a photo and then viola we were through - so 1 hour from gate to through passport and then baggage and customs which was a breeze.  Outside the airconditioning and into the heat was a real shock to the system.  The shuttle picked us up and did another loop of the airport as they can't stay and park so another lap to pick up another person.
Once on the road it is a real cut throat world out there on the roads ... it was just mad, the driver did not used the indicator once and wove in and out of traffic on the motorway that was 5 lanes deep and not once did I see a speed limit sign - basically the speed is fast and faster we went fastest!  Crikey I thought I was going to die - my seat belt was ill fitting (not sure of the laws here regarding that) we did see a crash that was on the other side of the highway and that had closed the highway (all 5 lanes) and so the traffic was banked up a loooooong way.
We got to the accomodation at around 11.30am - still too early to book in so we went down the road for lunch as we were starving and everyone was struggling with the 35 degree heat.  Inside IHOP which is a pancake type place we had burger and fries and an endless supply of drink - I drunk 1.5 litres of lemonade simply because it was bottomless!  So it was a big meal and all up for all of us including the tip it came to $85 which was bit of a shock for us so we have decided to do takeaway more so we don't have to leave a tip! and the meals are cheaper.
Exhausted walking back at 2.30 we get to our rooms - mum is almost passing out, caleb is beginning to whine and sharon is worried that she is perspiring to much ... by now I have aclimatised as it is very similar to melbourne summer weather so don't mind a little sweat!
The room is nice and unfortunately there is no jug to boil water and tea is not common here so we can go down to reception for cold water, fruit, coffee and cookies if there is any left!
Once in the room we endeavour to try to stay awake and go to sleep at a reasonable time at night - we are aiming for 8.30pm ... caleb manages until 4.30pm, I get to 5.30 while sharon and mum pack it in at 6.30!
I slept until 10.30, woke and read my book for an hour and then was in and out of sleep until 6.45am, got up and walked down the road - it is warm but pleasant, come back and they are all still asleep, so I gave them until 7.45am and had to wake them as the brekky room was filling up - nice brekky, crowded so we get a table and just help yourself to everything - i had cereal, yoghurt and apple, then a waffle and a muffin, i am full so we get a little extra for lunch as everyone else was doing that.  tomorrow we will get up earlier and now we know the system we will be more productive with using our time at brekky and stocking up on things!
so the morning was spent organising and booking our days ahead - tomorrow  (monday) is disneyland, tuesday is a hop on hop off tour of LA then wednesday is universal studios - thursday is our last day and we have left that open.
in the afternoon we walk down to big 5 (sports store) and target.
Sharon and mum were a long time in target so i sat outside and here is my view ... 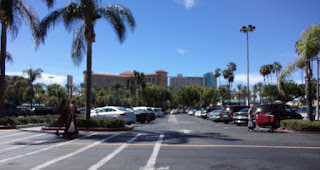 from there we decide that I will take caleb back to big 5 to buy his christmas pressie - a Nike shoulder bag as he had already bought a pair of nike shoes and had spent most of his pocket money so taking pity on him I was the good aunt and said I would buy it for his christmas present.  here he is displaying his wares ... 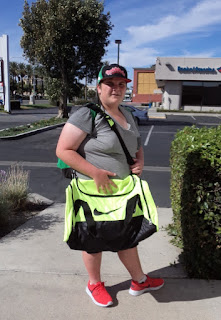 the bag is hilariously bright but in it is my shopping - a new pair of sneakers for $25 and a pair of scuffs for $17, nothing for you neil unless your feet are size 11-13!
Sharon bought 2 pairs of nike sandals while mum bought jayden some crocs!
thankfully all our tourist things are paid up so all we have to do is pay for our food and shopping.
tomorrow is disneyland.  a few tidbits - petrol is $3.19 for a gallon (10c more if you used debit or credit card), the temperature is around late 20's early 30's during the day and early 20's at night.  California is in a drought and have water restrictions that are very personally based - some boys at the pool were telling us, at the lights the pedestrian crossing doesn't buzz instead it is a light of a person walking so a few times we have been caught  chatting and missed crossing at our correct time, caleb keeps forgetting to look the correct way when walking across the road!
Posted by Janet O'Brien at 11:14 AM