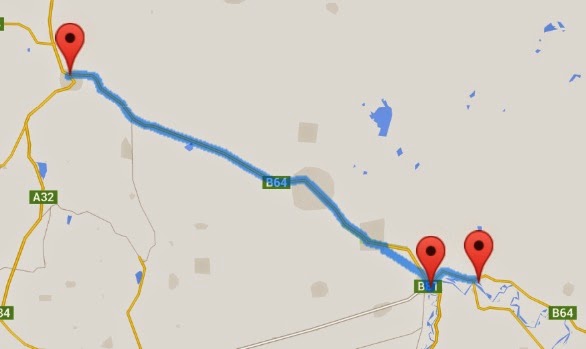 Last night it rained, not hard, but a light drizzle and it continued early this morning so we waited to see if the rain would stop so we could continue as the winds are blowing from the west and our road goes in a south east direction so it would be a tailwind for the bulk of it and I really didn't want to waste this wind!
We waited and it stopped and on the radar it was clearing ... so we left only an hour later.  You climb out of burra  and then it is down. down and down woohoo!  It is a good 10km downhill.  If you look at the profile it is all down, but it isn't really like that, there are one or two rises!
Early in the ride we come across this sign ... we are on the Goyder highway but we linked up with the end of another highway and I was intrigued by the name - Worlds End Hwy - what an unusual name that I mentioned to Neil that  I would like to come back and ride that highway - the towns include Eudunda 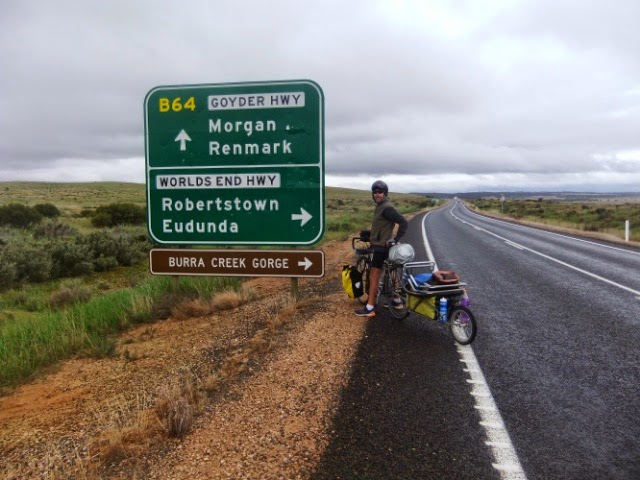 as you can see the day is pretty gloomy .  We did have some big showers and poor Kouta was not a happy little chappy.
As we approached Morgan - about 30km before it we entered the fruit fly exclusion zone and we had some mandarins that we got from the side of the road the other day - a bag for $1 - bargain.  So instead of throwing the mandarins away we decided to eat them and put the pips and skin in the Quarantine bin.  Here is Neil getting our dinner for tonight! 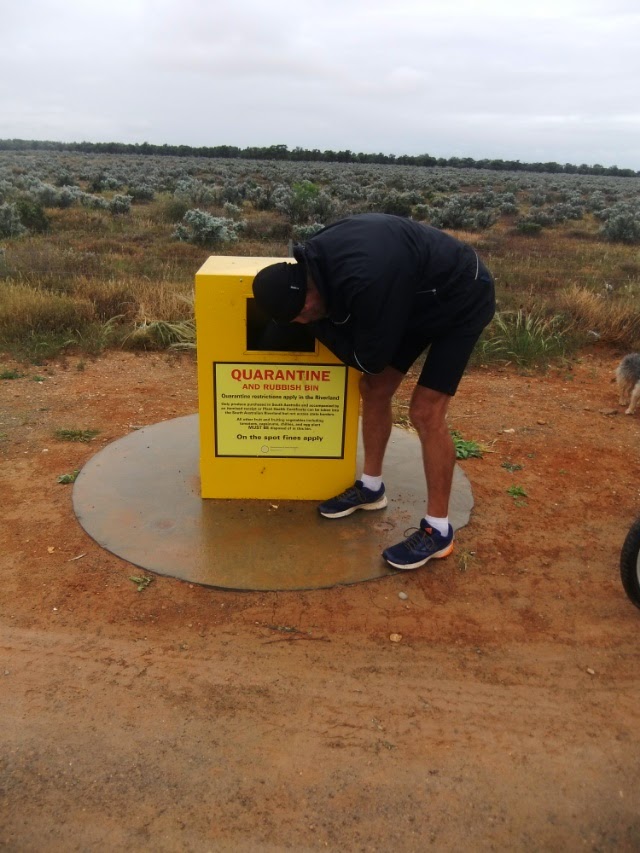 About half way to Morgan the wind became a strong southerly and it was hitting us from the side so we slowed up a bit and it wasn't until about 15km before Morgan that the road veers south so the wind was almost a headwind - by then the legs were a little tired (but I think that was from the fact that it was cold and we were a little damp from the rain) and Morgan seemed to take forever to reach!
First thing I did was make a bee line for the toilet - there is no where to pee along this Goyder highway - not a single bush on the roadside to hide behind!
At Morgan we picked up a little food for dinner and then crossed the river ... 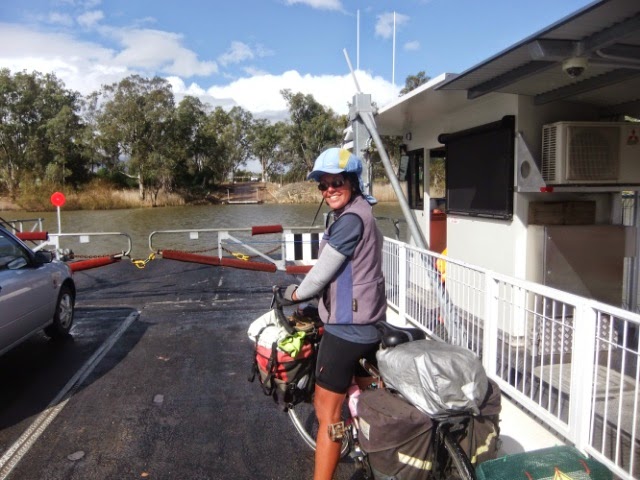 It is only another 11km to Cadell - normally we would stay at Morgan but on Wiki Camps Neil saw that the sports ground at Cadell was now a campground and we got there around 3.30pm tired and relieved that the sky was clearing and the sun was shining - more so then we could dry out our gear!
This is a fantastic spot ... a real gem, we will remember this spot and come back.  The managers have really put in 110% effort into this place.  The Amenities are spotless, so clean you could eat of the floor!  They are relatively modern.  They put us near the shelter so we could camp in there if we wanted to but our tent won't stand up unless pegged into the ground so we pitched just outside the shelter ... 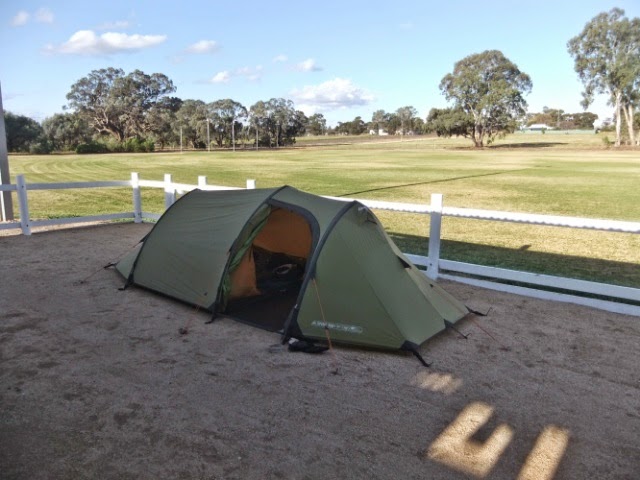 and here is the shelter with our washing all hanging up! and Neil is next to the amenities block ... 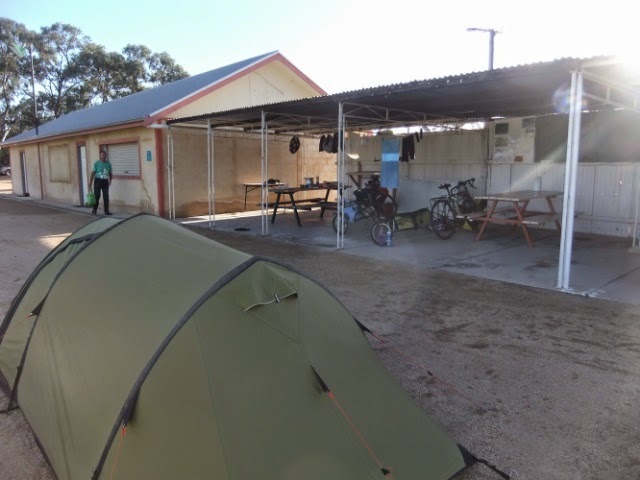 Now dinner tonight was something a little strange ... I have developed a liking for Baked Beans but I don't like them by themselves and prefer them with something else.  Up at Marla I had some of Neils beans and eggs and I liked it but I thought it needed bacon.  So today I got some chipolata sausages and cut them up and heated them up with the beans and poached some eggs and piled it into my bowl ... it was so warm in the stomach that I polished it off in no time!  Kouta loves the little sausages and he couldn't wait for his to be warmed up so he had his cold! 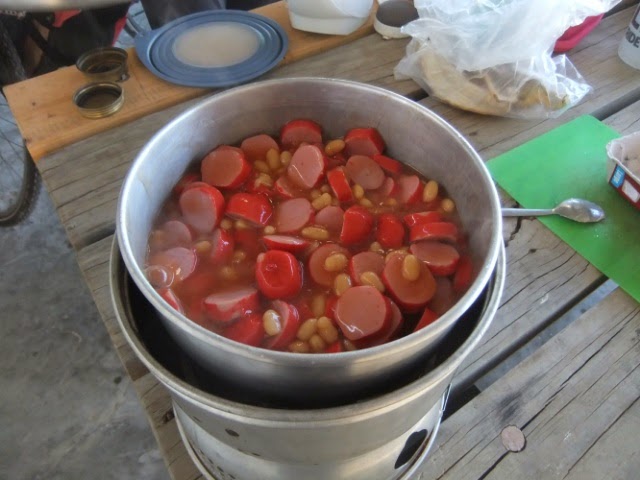 So tomorrow is our last day of cold south west winds and then we are back to easterlies.  Feeling a little tired now so we might consider a rest day before having to tackle the easterlies.  think we will make Berri tomorrow.
Posted by Janet O'Brien at 7:35 PM