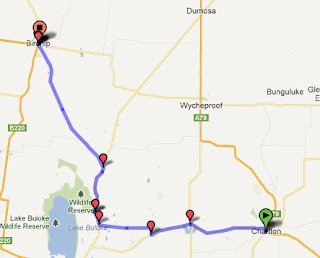 Before I start on todays blog I thought I would share a few photos of Charlton ...
the Avoca river - which flooded last year at 8.1m and this crept into the township itself and the campground was under water! 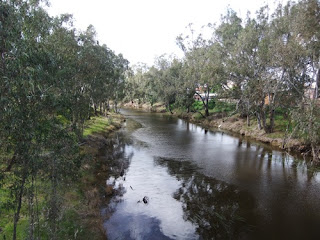 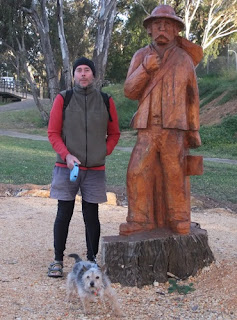 I don't think this is a local fish but I think it is from the Commonwealth games - so maybe Charlton purchased this one ... 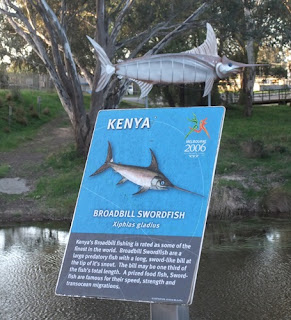 ﻿and this one is for you Penny ... do you recognise this building? 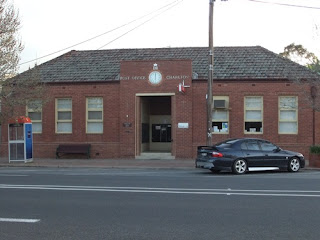 We had a relaxing rest day and read for most of the day.  Dinner consisted of eggs, sweet potato chips (they were heavily marked down as I don't think they are a big seller!) and onion, mushrooms and snowpeas ... but Kouta had a beauty ... triple smoked ham ... it took him all of 30 seconds to demolish 120grams worth :) 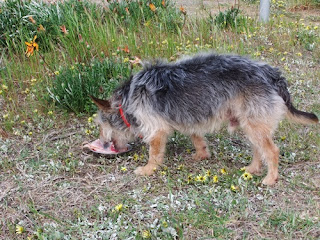 So onto todays ride - not alot happened today.  It was cold again last night and we had to sleep with our clothes on - we think the tent which is mainly mesh is not good during nights that are below 5 degrees - it will be great when the nights get warmer but at the moment it is not warm at night and tonight it is to be a frost and 1 degree ... I am sleeping in my sleeping bag tonight and kouta will have to fend for himself ... he has fur!
anyway we woke frozen, had breaky frozen, packed up frozen and rode frozen at the toes and finger tips!  we left around 8.15am and managed to avoid peak hour in Charlton, mind you the traffic going into Charlton and very heavy ... we were lucky we are going the opposite way to everyone ... not sure if the town roundabout could cope with the 3 car traffic jam it had ... Melbourne traffic problems are nothing compared to Charlton ... at least Melbourne has lights!
It took ages to warm up especially the fingers and toes ... did think of stopping and putting socks on but thought the fashion police would frown at sandles and socks!
Did stop at Lake Wooroonook for a quick break - does have camping but cheaper at Charlton!  Riding along we noticed a bit more farm animals and in particular flocks of sheep that had quite a few black sheep ... 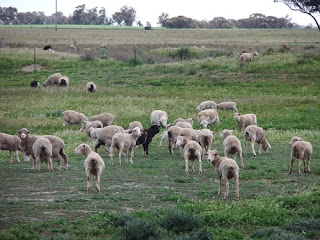 some where so cute and looked like miniature cows with their markings.
Stopped for lunch at the turnoff to Birchip - pretty hard going so far mainly headwinds  due to a very lazy and cold south westerly wind blowing.

I rode in my thermals and vest for most of the ride and didn't take the vest off until after lunch.  We made good time to Birchip considering the headwinds we had.  We have been here before and the campground is behind a hotel, gas servo, laundromat etc.  It is pretty rough and cheap and the facilities are very limited and my shower flooded when I had one ... I think the up keep of this place is non existent but for $12 we don't expect much.
Tonights tea is pasta salad with chickpeas and tomato and cheese sandwiches.  Tomorrow on to Beulah.
Posted by Janet O'Brien at 5:21 PM