Huntly to Aysons Reserve = 46km (Lockwood South to Huntly on Sat = 31km)
Cummulative total = 107km
Ok so we had bit of a mishap at Lockwood south - I kept waking up in the night and I found my Thermarest is deflated so to fix that would require a tub so the only solution was to come back to Huntly to pick up our spare one and continue on to Aysons Reserve after a rest day.
I would like to point out that on Friday the temperature was 29 degrees - ideal temperatures for cycling ... on Saturday it rained and was a freezing 12 degrees during the morning while we rode back - our feet were frozen!
So after a rest day yesterday and redoing the layout of my bike we embarked on a sunny warm day.  I have set up the bob trailer a little different - ditched the 2 dry sack food bags and opted for 1 big pvc 90 litre bag ... it is the mother of all food bags!  Now I know where everything is and everything fits in better!  So here is the new look touring bike ... 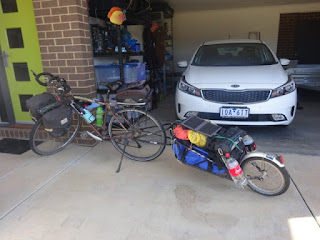 Over the course of the day - actually after the first break that solar panel moved to the front rack as I realised my fat arse blocked it from getting sun when it is at the back!  The photo below is with Neil and his bob trailer - due to the spare thermarest being massive he had to put it in its own orange dry sack along with the inflatable pillows which also take up heaps of space! 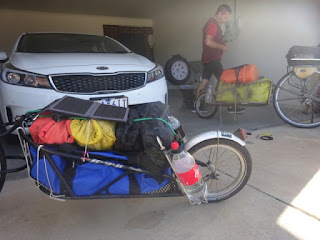 So we left at 9.30am - a little later as the Epsom-Barnadown road is busy before school times, actually it is busy all the time as it is an alternative to the midland highway.
So we took breaks every hour as we had a slight head wind and had a coffee break at Avonmore reserve - that is not really its name (it doesn't have one) but we called it that as it was in the Avonmore region.  This is the place, Dad, that is aong the Campaspe river and halfway between English Bridge and Elmore. 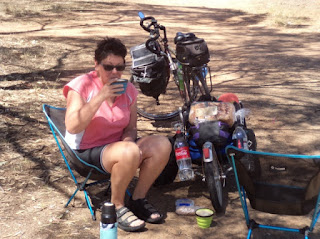 As you can see the river maybe widish but it is definitely shallow and full of snags - no good for a loaded kayak! 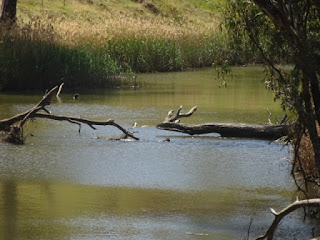 After our coffee break we only have another 1 hour to ride to Aysons Reserve, at this point the legs are beginning to tire but are ok to plod along - the wind is a still a head wind but okay to sit on around 15km per hour.
Along the way there are plenty of fields with not much crop or greenery!  There was one field that had a dip in it and you could see where the water channel was ... 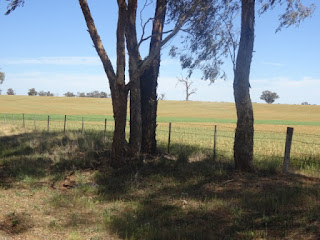 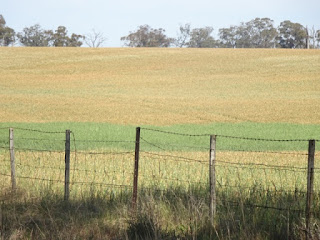 big difference in colour!
So we arrive here at Aysons Reserve and it is chockers with big caravans and mobile homes so our little tent looks minscule compared to them - last count there were 32 and more are still arriving!   We are fortunate enough to be able to ride through the bollards and can camp along the riverside.  If you remember where the jetty was Sharon where we launched Dad in his Kayak we are not far from that point - actually it was where you were going to go to wee and I said no as that was going to be our camp spot in a few weeks!!! 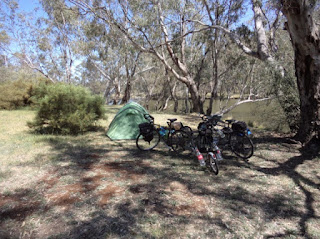 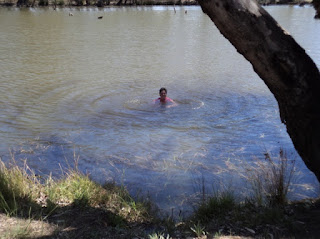 I thought I would kill 2 birds with one stone so I went in with my cycle clothes in all so they got a rinsing!
After both having a refreshing but cold wash we admired our new food bag! 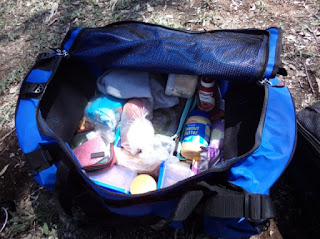 and enjoyed a cuppa and the view! ... smell the serenity! 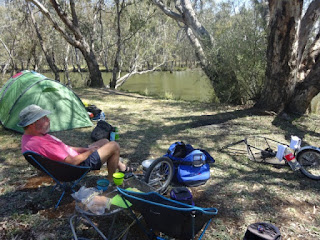 Tomorrow we head to Lockington.
Posted by Janet O'Brien at 3:58 PM