Hi De Hi campers!  it was a tough day today!
Not alot of photos as we have been on these roads before, well at least alot of the places seemed familiar!
We left around 8am and there was very little wind so that made the ride pleasant to our first break at Mysia ... from there it was all headwinds all the way to Wedderburn!
I do say the following with a smile on my face ... Neil really struggled with today!  I know it seems really mean to say it with a smile on my face but Neil never struggles - it is always me!  but I knew today was going to be into a straight headwind and we were very fortunate to make it to Mysia with little or no wind.
The going was tough as the roads were out in the open and you were exposed to the full wind (no sheltering behind trees!) and to make it a little worse - from Borung to Wedderburn you cross over a very small range but from Borung to about 5km out from Wedderburn you are slightly rising and again you are out in the open so all you can do is just turn off from the wind and think of other things - Neil couldn't do that today but me ... well I sewed a pretty shirt in my mind!!!
So 5km out you get into the part of the range that is a little hillier but amongst the trees and that was easier as the trees provided respite from the headwind.
We were relieved to get to Wedderburn and are staying at the campground.
This is our 3rd time here - I like the town of Wedderburn and this campground is quite crowded by small town standards - a mixture of permanents and long stay blow ins as apparently it is very cheap to stay here powered - hence the crowd!
We haven't paid yet as the guy on the phone said he will be around later and he said to camp by the mud hut which is in the open at the front - we thought far out - stink!  So we choose another spot where there was no power points and under a shady willow tree ... 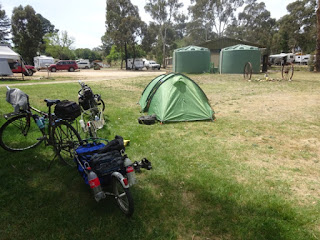 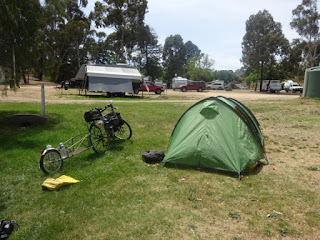 So after a cuppa, lunch and shower we headed off into town to get our dinner at the local Foodworks and they had 1/2 chickens for $6 so that is for dinner along with a small pasta salad - could have got a chicken and chip meal but the chips would have gone soggy and cold by dinner time!  We also got a four pack of Cornettos which we polished off in the park!
Since last being here they have given the main street a bit of a make over - redoing the footpaths and planting gardens and doing up the public toilet and memorial park on the mainstreet - most shops are not open or in business but the street has a very nice "stop here" appeal to it ... 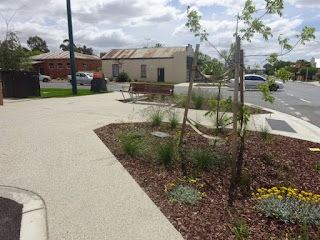 and it even as a bike path! 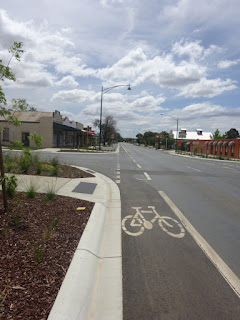 Tomorrow is Bridgewater on Loddon and we are going to go and line up and get a piece of Vanilla Slice - from the Bakery that was judged as having the best Vanilla Slice in Victoria 2018 - you might have competition Flo!
Posted by Janet O'Brien at 3:06 PM