It was a lovely rest day down at Killarney.  Despite having a very windy and stormy morning with the tent being blowin' around a bit!  It turned out to be a cold by sunny day.  Walking along the beach in all the clothes that we have with us and also the raincoats! 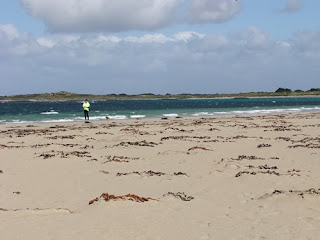 Despite it being very windy the bay was still relatively calm but I think too cold to swim in! 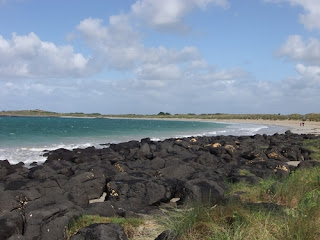 but walking along I looked at Neil and all this trip I have cursed him because before we left he decides to cut his own eyebrows and made an absolute mess of it so that now as it grows the left brow has sort of a curl to it ...

This morning it was still raining again but it soon cleared so we slept in a bit knowing that we only had 25km to ride to Heather and Anthony's home in Warrnambool.  We were going to go along the rail trail but since it has been raining a bit we thought the trail would be soft and also the lilydale topping would flick up all over poor ole Kouta like the rail trail to Foster!  So we took what I like to call the 'spud roads' which is the back roads to the base of Tower hill which are full of potato farms and even along the highway there are a few of them.
The highway was very busy but we only rode along it up and over Tower Hill to Illowa where we took the old highway road to Dennington and then jumped back on the main road but that had a bike lane the whole way and then voila! here we are at 'Hotel Warrnambool'.

Hotel Warrnambool also has a resident dog called 'sooty' that has had a haircut and looks about 10 years younger than what he should be!

so happy to be in a warm place and not have to pitch the tent up in the wind.
Tomorrow onto Camperdown - a longer day because we are not sure the Cobden campground is still going.  So hoping we have a tail wind!
Posted by Janet O'Brien at 3:54 PM