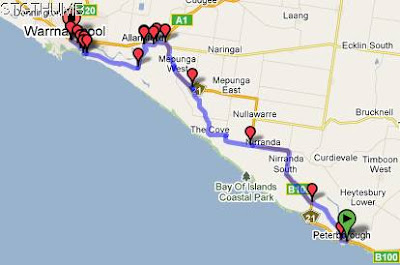 Peterborough to Warrnambool = 53km
Cummulative total = 152km
It was a long hot and exhausting day for us all today - I didn't think we were going to make it!
Knowing that Heather and Anthony were going out this afternoon we decided to get up early and make an early start and fearing that we might sleep in I had a very broken sleep because I was petrified that I was going to oversleep! Anyway we woke up in good time! but first some more pictures of the beautifull victorian coast line. 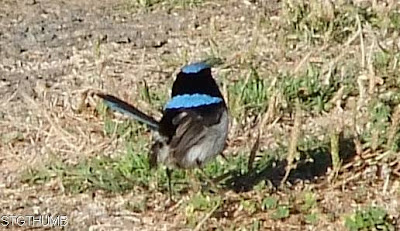 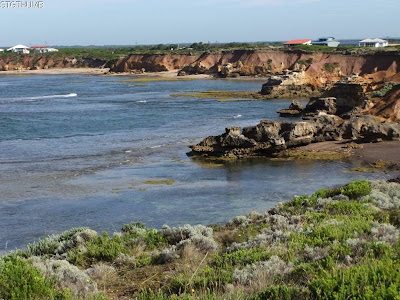 those houses have a very nice view! 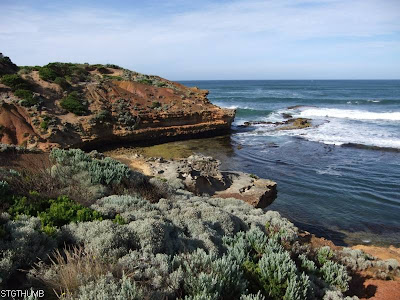 So we were off and the wind was already up as well and was coming from the North west so it was a head wind the whole way to Warrnambool.
We were the only ones on the road this morning but after about an hour the traffic began to pick up. Just up the road from Peterborough is Bay of Martyrs. 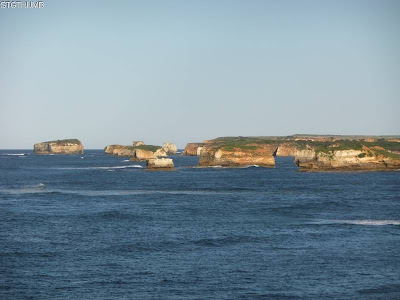 I think they are just a collection of rocks that have broken off the mainland. And a few kms further up the road is the Bay of Islands 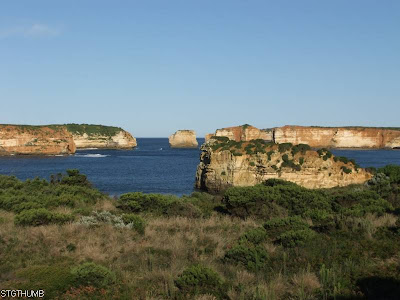 This was taken from the road and it is a popular boat launching place.
From here we cycled along the Great Ocean Road to Nirranda where we stopped for a quick break, topped up our water bottles as although it was only 9am it was becoming very hot. the wind was blowing harder than when we first started out and the going was slow.
Check out the weather vane at the Nirranda netball courts! 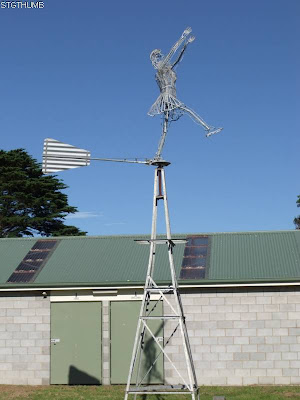 It is quite neat and it was definitely blowing from the North west when we took this photo.
Just 2km further along the road there is a cross roads and the GOR turns right but we continued on straight and took the quieter road. This was a good choice as the GOR can get busy. The road is a little bit rolling and funny enough a few years ago we came this way from Warrnambool to Port Campbell and it seem flat (maybe because we had a raging tailwind then!) but now it seem a little rolling! (maybe because we have a raging headwind!). The road then links up with the GOR again and you go along for 3km and then we took a dirt road left (Carrolls lane) to avoid going into Allansford and back out again to the Hopskin river road. Not long this road there is a shady spot under some pine trees which made a great lunch spot.
by now the temperature is very hot indeed and all our water is almost hot and very unpleasant to drink! Just as we were packing up we saw in the distant 2 cyclists so we waited for them and it was father and son out touring - they were from Melbourne so I assume they are going back - today they are making for Port Campbell. 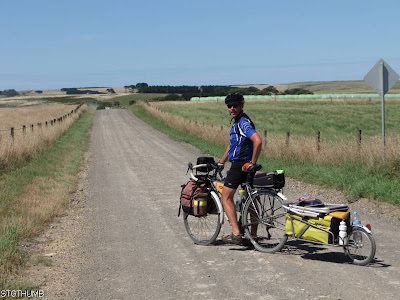 this is the dirt road we were on - only about 3km worth but it saved us at least 5km! This road joins up with the Hopskins River road and we have cycled this road a few times and there is always a headwind! Once we got to the bridge that goes across the river we had to pull over and get some coco cola into us as we were a bit weary at this stage and poor kouta was desperate for cool water and wouldn't drink the water out of our bottles as it was too hot for him - so while Neil was looking for a tap Kouta had found a ground water tap that was leaking and decided to drink the water around it! Normally I don't like coca cola but it sure went down well today.
We still had to go on the outskirts of Warrnambool to get to Heather and Anthonys home and it is a slight climb to there place and I tell you we were glad we finally got here - very weary from the heat and headwind!
Tomorrow we go to Port Fairy and hopefully we will get to see the mutton birds come in at night. We will stay there 2 nights and we will take turns at going to see the mutton birds coming in around 9pm as I am sure they won't allow kouta to view as well!
Posted by Janet O'Brien at 3:33 PM