Colac to Cobden = 51kmm
Cummulative total = 51km
We're baaaaaaaaack!!! Yikes we are at it again after a 3 month break and boy we could tell today that we have had a break! As you can see from the above 2 images we have sort of restyled - if you want to have a closer look at the profile or map just click on the image and it will enlarge but to return to this blog you must click the BACK button and not the red 'x' button!
Anyway we drove to Colac yester (Australia day) and headed off this morning at a leisurely 9am departure.
Below are photos of the bikes loaded up including Kouta waiting in the trailer for us! 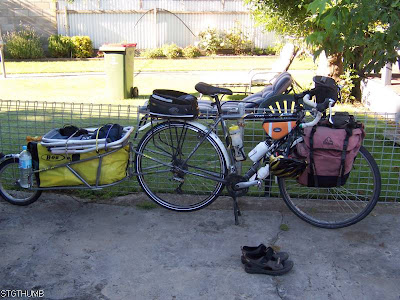 my bike with Kouta.
Kouta slipped back into the routine quite easily and this morning he hung around our feet just to remind us that he is coming along with us ... he has a fear of being left behind! It was okay going along the main highway and there was not much wind about but you could feel it building up from the west. The legs felt a little tight going to Swan Marsh ... I suppose it was just getting use to pushing the heavy weight of the bikes.
We turned off at Pirron Yallock and it is a nice quiet road from here to Swan Marsh, where we chatted to a local and we noticed that the tennis courts had been tidied up a bit and we pointed that out to him and he mentions that the town (only a few houses there!) is getting a new fire station and the local primary school only has 5 students ... no over crowding in the class there!
We came through this way nearly a year ago - only 1 1/2 weeks earlier compared to last year and the one thing I noticed was that the blackberries were still green so no blackberry picking up near Carpendiet for us today.
We got to Carpendiet just on lunchtime and the legs were beginning to get a wee bit weary! the wind had picked up and it was a strong headwind which was okay as long as we didn't think about it! 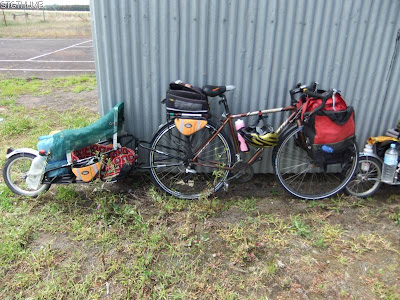 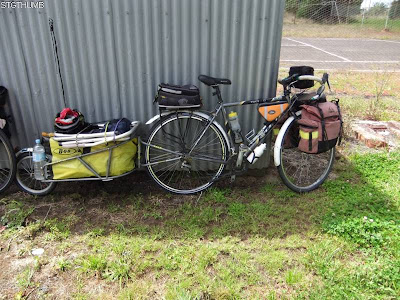 We have a cuppa at this rest stop quite a few times now so there was no need to take too many photos as coming along here it was a sense of 'de ja vue'!!! But I couldn't resist just taking one photo of Neil in his new $5.19 markdown Aldi cycling shirt! 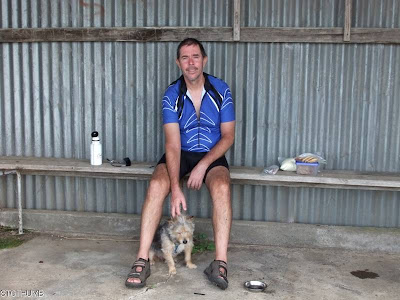 Also just across from the Capendiet hall is a farm house that has a few yaks ... not sure what they are used for (maybe milk?) 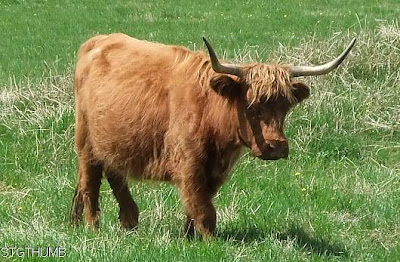 Really I only took this photo so I could play with the camera by taking a far off shot and cropping it in closer on the computer.
Just past Carpendiet hall is my blackberry picking spot and some farmer had killed all the bushes on his farm edge and Neil mentioned that last time we came here we came across an Echidna and he wondered if we would see it again ... I thought he was joking ... but a few kms later we saw one! 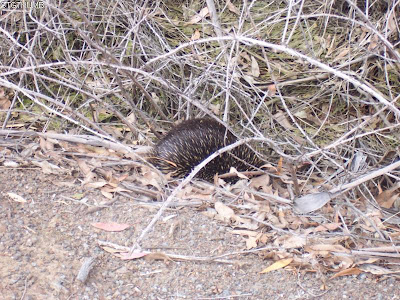 not sure if it is the same one though ... and like me I think he was looking for blackberries. Just before you turn the corner of this long straight road there were still some bushes but the blackberries were just too green. Looks like we will have to finish off the diabetic fruit cake Flo had made - mind you as I write this blog I have already had 2 slices and the fruit has given me wind ... so the fart angel only knows what it has given Neil!
After Carpendiet we start to get into a few rolling hills to Cobden so basically it goes like this - along, down, up, down to meet with the road that comes from Stoneyford and from here the traffic increases a bit as the traffic is being diverted from the main highway via Cobden to get to Warrnambool as there is a bridge further on that has been damaged in the flood. So the traffic wasn't that heavy and the road has been repaired a bit (to cope with the traffic load!) so the cars had to go slower. After joining the road you start to climb a bit then go down again only to go up one more small climb just before getting to Cobden - any other day after the long tour last year the hills would have been okay but since this is the first day out the hills were a wee bit hard!
But we both pulled up okay and after walking into town to get some food the legs feel okay.
While walking into town from the caravan park you cross where they have dammed up the Cobden creek which is nice and full and on the opposite side of the road is the local pool and then after that I think they release the water to continue on as the Cobden creek. 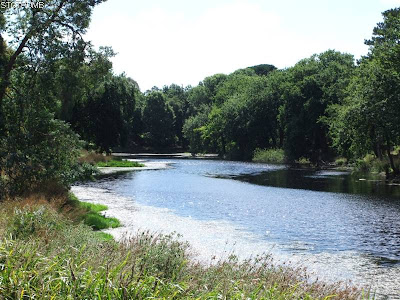 It is a nice setting around the creek in fact the whole town is quite nice.
When Neil went to check in at the caravan park, Neil mentioned that we were here last year around this time and the guy didn't remember us until mentioned that we camped in the corner and had the snake near us ... then the guy remembered us! But no snakes today! or fighting girls like last time!
Off to Peterborough tomorrow and we probably stay there on Saturday. Hopefully we can go for a swim!
Posted by Janet O'Brien at 4:31 PM