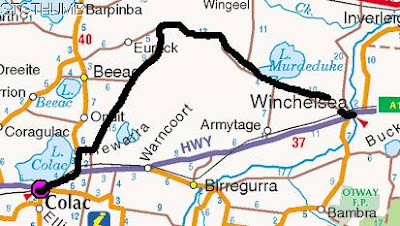 Colac - Winchelsea = 61km
Cummulative total = 1100km
You know how Neil and I dislike going on any major highways ... well today had to be the record for kms' done to avoid the main highway! Normally it is 37km to Winchelsea from Colac but if you look at our map you will see that we decided to cycle the north roads (as we have previously cycled the south roads through Birregurra etc and decided we would like a different view!). It really is the loooooooooooooong way around to Winchelsea - 61km to be precise! Crazy aren't we!
It was a lovely road and the scenery is different too. Alot flatter and not so hilly like the Southern roads, but in saying that you are also exposed to any wind that might be whipping around! And believe me the wind was blowing from the South East so the final 30km was straight into the wind and I tell you at 10km out of Winchelsea I was just about over the fact that Winchelsea was still toooooo far away! And at that point I did think that we had made a mistake choosing this road with the final 30km into the headwind (the first 30km we had a tail/cross wind) as it just dragged on and on and on and on and you always hoped that over the next crest or just past the line of trees you would see Winchelsea ... but no the road just kept going!
But like I said the scenery was nice and not long into the morning we came across this bluestone farm house and outside were 3 alpacas (at least I think they are!). 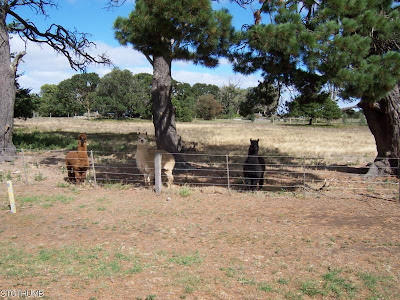 They were incredibly interested in either Kouta, us, the bikes or all of us including the bikes! As they ran to the fence and were staring at us with such curiousity! They looked very cuddly and would make a lovely pet in winter! 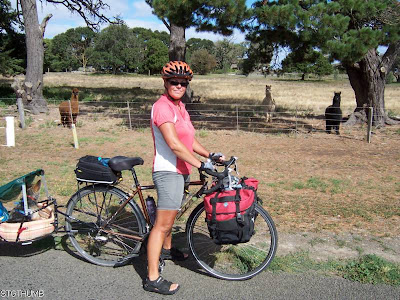 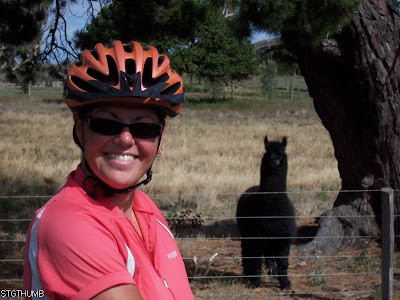 I liked the black one!
Also along the way we saw heaps of bulls out in the fields and there was one paddock that had these huge bulls and no amount mooing and noises from us could stir them to start running, not like other cows and smaller bulls which love it when we moo at them!
Not long after our cuppa break we came across this field of Sunflowers, we were not sure why the field had sunflowers in it but it was like they were deliberately there as they were growing close together like someone is growing them as a crop. Maybe they grow them to fertilise and nourish the field? 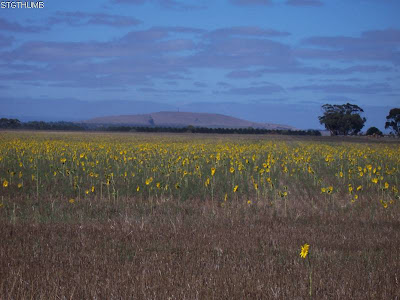 Mt Gellibrand is in the background - last time Neil and I saw sunflower fields was when we were in Montana and there were heaps of fields there!
We got to Winchelsea around 1.30pm and the caretaker Geoff and his little dog Fred were happy to see us.
Tomorrow we move on to Geelong and will take a different road from last time - just so we can mix it up a bit. I will have to look at the map and check which way the wind is blowing tomorrow as I don't particularly want to have the last part into a headwind (I don't mind it first thing when I have fresh legs!)
Posted by Janet O'Brien at 4:00 PM