Just a quick ride before we head off north after Easter! Unfortunately we were meant to head off on Friday but we could not get a camping booking at Upper Yarra Dam over the weekend so instead we will head there tomorrow and stay until Wednesday and then make our way back to Warburton and onto Bayswater on Thursday in time to avoid the awful Easter rush!
We started out at around 9.30am and believe it or not (and I actually managed to get a photo of it to prove it!) but Dad was actually ready first and was (dare I say it) WAITING FOR NEIL AND I!!!! 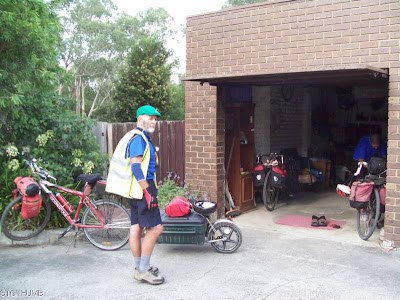 He was all packed yesterday whereas I had to pack up the food bags and couldn't do that until this morning and Neil had a few bits and pieces to pack up and so Dad was ready well before us!
So it was an uneventful ride via the rail trail to Warburton. Neil and I both noticed that the Montrose hill on Canterbury road and the Mt Evelyn hill were alot easier to do ... in fact Neil says that it was easy but I think that is exaggerating a bit and more like it was rideable and we both didn't have to stop and walk and found that our legs were stronger to cope with it ... Dad thought that it was tough but at least he didn't nearly dye of a stroke like Neil did on the Montrose hill when he first did it and he also coped really well with the Mt Evelyn hill.
There were heaps of riders and walkers on the rail trail today and here at Warburton campground there are a few campers. At least there are more people here than last time - we were the only campers and it was freezing!
Kouta is incredibly excited about being on the road again and is loving the camping and has spent the afternoon bounding around the grounds acting like a puppy!
We are camped near the shelter (like last time) and you will see from the photo below our tent (yellow) and dads' tent (green) ... the area between the 2 tents is what I like to call the "snoring zone" which basically means that the distance has to be great so we don't hear dad snoring!!!! 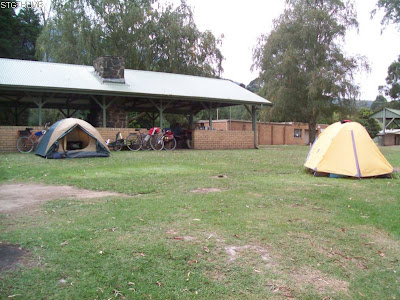 When we got hear around 2.30pm it sort of began to rain not really heavy just a spinkle and at the moment now it is trying to rain, although rain has been forecasted we are not sure if Warburton will get any (you would think it would being up in the ranges!) but it is still pleasantly warm at the moment.
There were quite alot of campers still here at that time - I think they check out late in the afternoon especially if they only have to go back home in Melbourne somewhere. 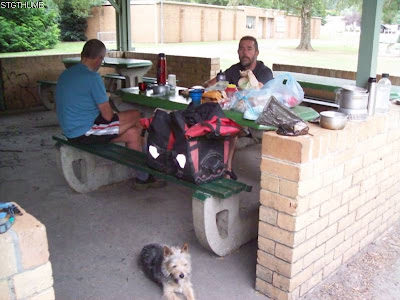 The above photo is the shelter that has a fireplace and tables and as you can see we certainly do spread out and currently have 3 days worth of food with us - around 15kg to be precise! As up at Upper Yarra Dam there are no shops (even along the way) to pick up supplies so we bought most of it in Bayswater and a few bits and pieces at Yarra Junction.
I remember last time I was here I don't think I got a photo of the Yarra River that runs alongside the campground. It is so peaceful up here and it is a shame that anyone is here really! 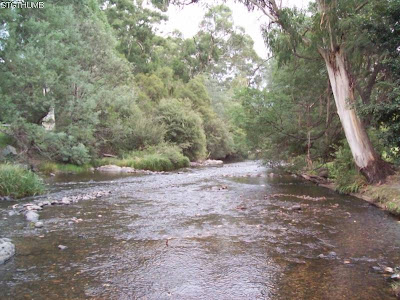 Not too sure if I will get internet reception up at Upper Yarra Dam so there maybe no postings until Wednesday. Until then happy cycles
Posted by Janet O'Brien at 6:32 PM