Geelong to Werribee to Bayswater 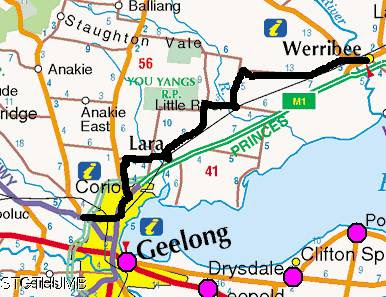 We are now back in Baywater, Melbourne. We arrived home yesterday and I was too tired to do this blog!
We started very early yesterday morning so that we could catch the train from Werribee to Flinders St and then onto Bayswater before the peak hour rush.
We cycled through the industrial estates of Corio and Lara to connect to some very quiet country roads to Werribee. It was a pity there was no campground in Lara as that looked like a nice place to stay, in fact it looked really nice to live in, big enough to have a table tennis association and a supermarket which is all Neil and I need to survive!
But it was nice riding through the quiet country roads looking in the far off distance to see if we could spot the skyscrapers of Melbourne, eventually we could see it through the smog! And we also had a gentle tail wind so that made things a hell of a lot easier than the day before!
We got to Werribee and caught the 11.06 train and arrived in Bayswater just after 1pm so that was pretty good going!
The grass was very long (it came up to between Neils knee and thigh!) so while Neil cut the grass I unpacked everything.
So now we just sit back and reflect on the past 2 months cycling and what changes and improvements we can make for the next tour.
One thing I have not mentioned in any of the postings of this blog (due to not wanting to jinx ourselves!) and that is, believe it or not, we did not get one puncture between the 2 of us!!!!
So that is all until the end of January/beginning of February.
Posted by Janet O'Brien at 11:27 AM