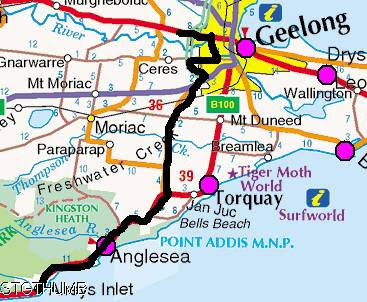 WHAT A DAY!!! For me today was probably the hardest day so far - Neil thought that the first day of the 2 days that it took to climb Mt Hotham was the hardest day so far but today was a gruelling day of headwinds, not just a gentle breeze mind you, but full blown, gut wrenching, heart breaking, mind blowing WIND!!! It was a Northerly this morning and according to the Elders weather forecast site the winds ranged from 17kph to 35kph and then it switched to a north westerly and increased to 50kph at around 1pm (we were still riding at that point and going into it!) and has now switched to a west south west when we arrived at our campground. Man it took us sooooo long to get here mind you some damn useless bicyclists didn't help our case when giving us directions on the best way to cross Geelong ... damn cyclists!!!
But first the ride to and out of Anglesea was up and down with a rather long hill out of Anglesea, but we left early this morning at 7.30am hoping to get some km's up before the wind but alas the wind was up well before us this morning!
Once we turned north to Geelong the wind was right in front off us and the speed dropped down to around 12 - 13kph!!!
Once we got to Waurn Ponds we met to cyclists that obviously worked at the University up the road as they had British Accents and were very hoity toity! All I have to say is that they maybe educated but unfortunately they lacked the necessary skills to explain the ideal way to get through to Geelong to the Ballarat Hwy (which is where our campground was). One starting rabbiting on about a bike path through Lara (which is well past the Ballarat Hwy in fact we will pass through it tomorrow!) and the other started mentioning street names and the like. So we left them still unsure as to whether to take the ring road or go through the city.
Neil thought I wanted to go via the ring road as it was hilly but the shoulder would be good, I didn't really care which way we went as both ways were going to be difficult!
We opted for the ring road but unfortunately bicycles are not allowed on the freeway between Ceres and Hamilton Hwy so we had to get off at the Ceres turnoff, unfortunately the 2 cyclists weren't really clear on telling us that!
So we came off and down to Shannon Ave and continued on until we met the Ballarat Hwy, clearly we should have taken the option of going through the city as it would have been alot easier. As riding along the Shannon Ave road was good, alot of traffic but there was 2 lanes, off which cars stayed out of the left lane (as there was the occassional car parked in it) so it wasn't too bad to cycle in and we suspect that is what it would have been like if we had gone through the city ... oh well next time!
So by now the day was just dragging and the wind was incredibly strong that it was blowing me all over the place and there was dust and I think one point the gust was soooooo strong that I managed to pedal and not actually gain any ground!
Right now it is 5.50pm and the wind is still around 50kph, we managed to get the tent up and have the doors open so the wind just blows through!
We are here at the Eldorado campground (the only campground in Geelong to take dogs) and last night I said this was going to be ultra expensive ... well this is a new camping cost record .... $36.00 to camp! and that is with our top tourist discount, unpowered but we do have our own ensuite as they don't have a shower and toilet block and every site has ensuites .. hence the cost.
The camp kitchen is well equiped so we have definitely blown the budget for today.
I forgot to mention that yesterday Kouta had his photo taken quite a few times (in fact he has had his photo taken while in the trailer quite alot on this tour!) Some actually slowed down and took a photo as they passed us and one actually stopped on a hill and got out and waited for us so they could take a photo ... so watch out Richo ... Kouta is now a "SUPER STAR"!!!
Tomorrow we head for Werribee and I think we will have a tail wind and then hopefully we will be able to get on the trains and be through Melbourne before the evening train rush.
Posted by Janet O'Brien at 5:27 PM