Yep another change of plans!  We were suppose to be at Peterborough tonight but when we got there the wind was really blowing right up the estuary and there were also quite a bit of waves - we didn't fancy tackling such strong winds yet again and also Kouta said he doesn't want to paddle as he gets soaking wet when the wind is blowing this strong due to all the water spray from the paddle ... the dog has spoken and we will obey him!  So we skipped kayaking the Curdies river and continued on to Princetown where we are at the end of the Gellibrand river and will stay here 2 nights - this river is a little more sheltered than the Curdies besides the camping is alot cheaper here compared to Peterborough!
So let me tell you about last night at Killarney - there was a 50th birthday celebration at the small hall there and it was predominantly outside and they had a truck turn up and that was the stage for a Melbourne bush band!  We weren't invited but we could here the music and it wasn't half bad!  They band stopped around midnight and then they seem to quieten down except for our neighbours in the tents next to us - they were invited and they chatted until around 3am.  Funny enough we both slept through most of it and drifted in and out of sleep but the chatting woke me up at 3am and it took me about 15mins to get back to sleep ... needless to say I wasn't quiet this morning when I assembled the stove together, banged a few pots and looked for any excuse to speak loudly to Kouta since he is going deaf you have to raise your voice!!!
We left early and picked up some fresh bread at Warranambool and then popped in at Heather and Anthonys' for a cuppa and left so they could get ready for church.  And that is when we came to Peterborough ... nice setting there ...

Not really interested in the Great Ocean Road as we have been along here before by bike a few times and so we didn't stop to take a photo of the 6.5 apostles (it is really called the 12 Apostles but since they collapse on a regular basis they get less and less!)
We get to Princetown at around 1.30pm and it is grey skies everywhere and the wind is blowing but we find a spot and use the car as our wind breaker.  Not particularly worried about the wind with river as it is relatively sheltered 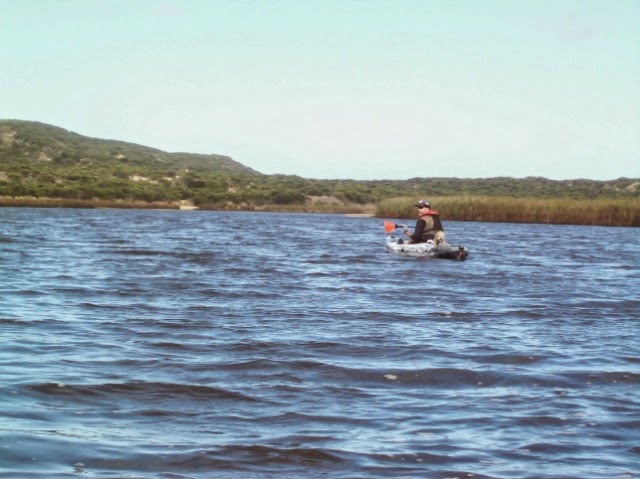 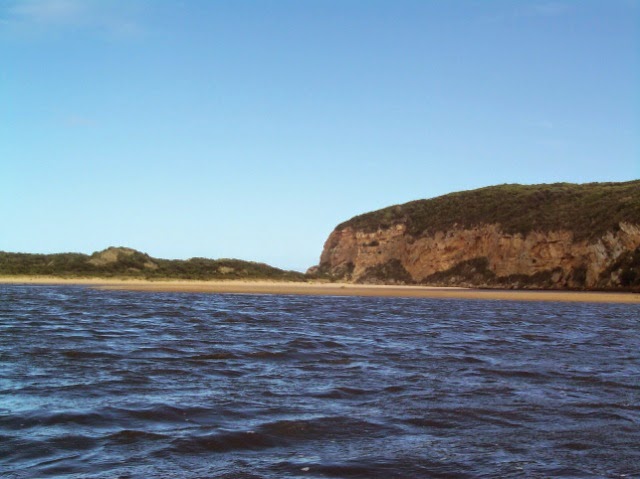 on one side of you as you near the mouth entrance you have a towering cliff and on the other side is reeds and low lying shrubs! 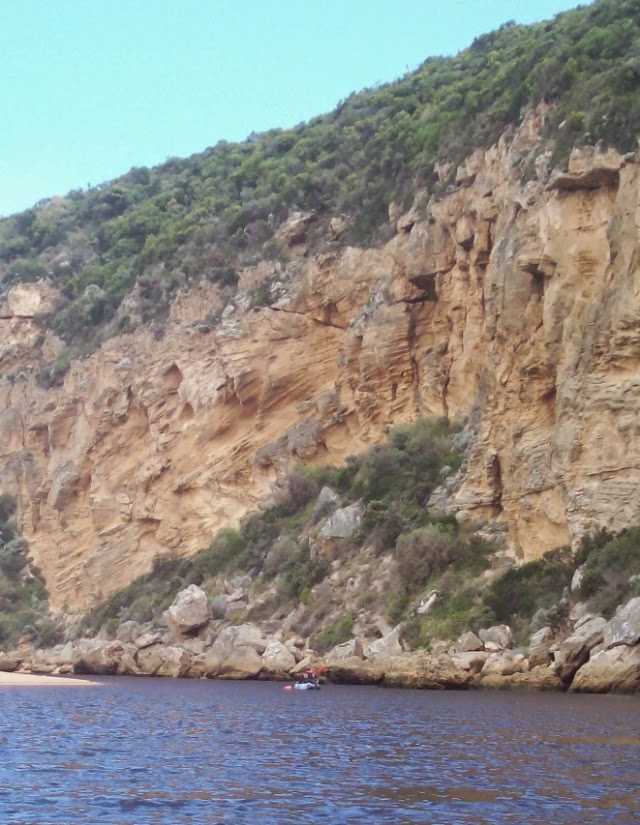 Neil is getting closer to the mouth entrance ... funny enough Neil has trusted me with his old camera to be the photographer today and I find that whenever I stop to take a photo the wind blows me back another 25m so technically I cover a bit more distance than Neil! 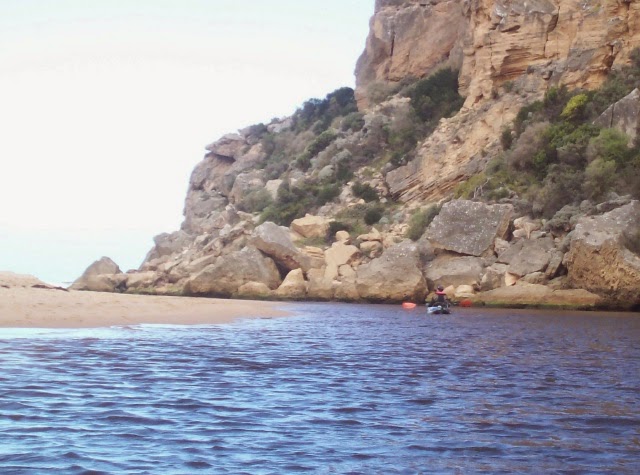 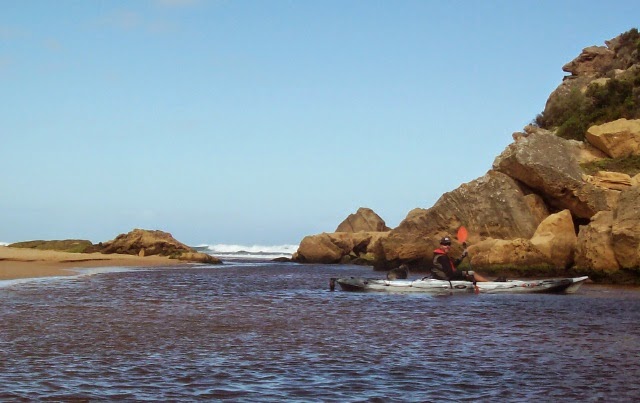 this is how strong the wind is - on the way back we didn't have to paddle and we still picked up speed!
One thing we have to say with kayaking is the facilities to launch a kayak can be non existent - we thought we could launch the kayaks successfully from a makeshift track someone had made, here is the track ... 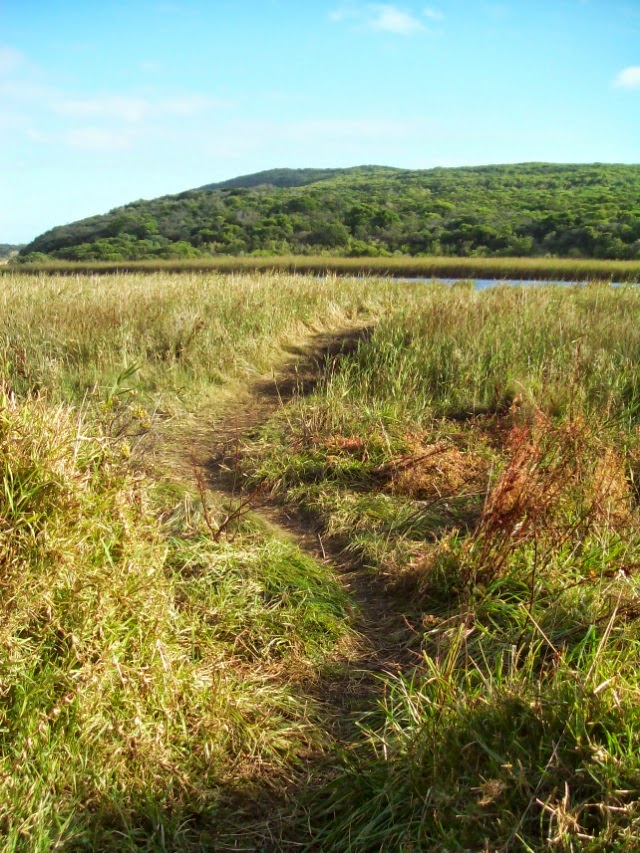 and what started out as a nice track turned into a realy muddy bog! 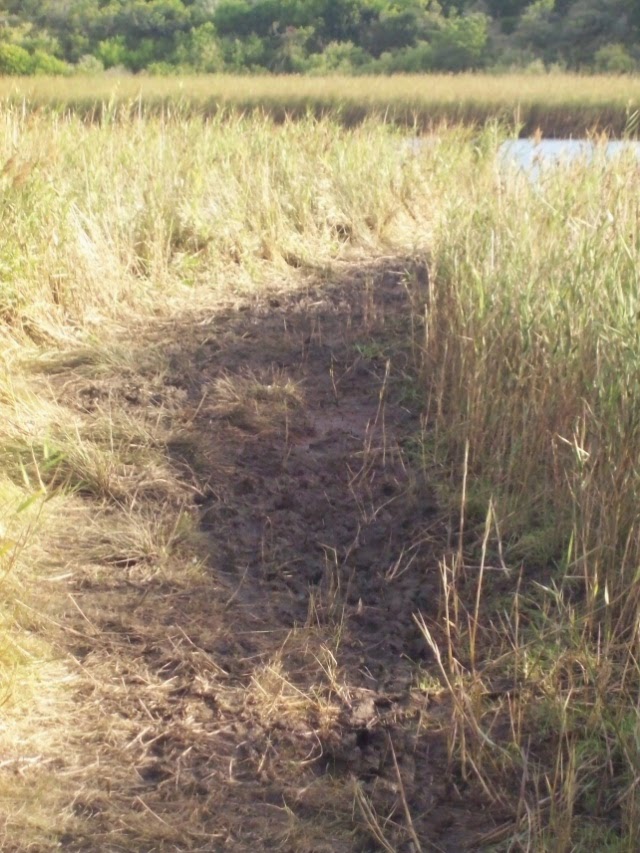 we managed to get the kayaks there on their trailers and successfully launched them into the river after some negotiation with the embankment! lets just say to hell with the trailers to get the kayaks back - Neil dragged them along the edge of the mud track!  Tomorrow we will drive down to the boat launching place as they have a mud/clay embankment that has a slope rather than a drop to the water!
So we are at Princetown Reserve which is the old cricket ground.  People must use it as they have a brand new bbq area that is nice and flash, the outside toilet block has been painted, the toilets are relatively newish compared to the showers.  All in all it is nice and only $20 unpowered for 2 people and $25 for powered.  It is a massive area and plenty of unpowered and limited powered sites.  Popular as there are quite a few vans here at the powered sites.  this is probably the cheapest camping you will find along the Great Ocean Road - camping is normally anywhere from $30 - $40 along this road and that is for unpowered!  Here is our spot ... 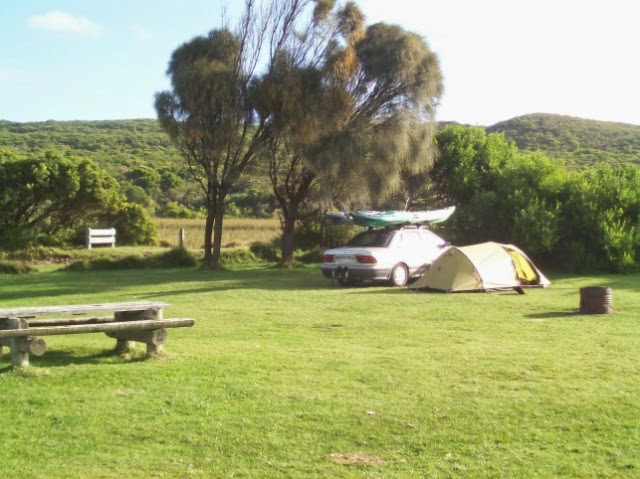 One thing you notice when you get out of the car is that there are heaps of kangaroo droppings but no kangaroos around - they soon turn up around tea time.  We are having a hell of a job stopping Kouta from eating the poo that is lying around ... anyone would think we don't feed that dog - tonight he has his biscuits and packet of dog food, then he has a little more biscuits with a poached egg and a few baked beans and he is still off trying to eat the kanga poo!
Coming back from our walk tonight the kangas are using our exit gap near the tent and poor Kouta is beside himself as he can't go up to them and smell them as they bound off so all he does is sniff the poo and walk around with his nose to the ground .  Here they are in the oval ... 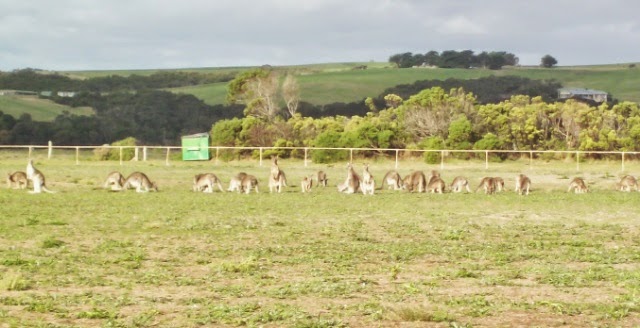 So tomorrow we stay here and will go up stream, didn't do alot of kayaking today - more interested in listening to Geelong get a hiding from Fremantle ... should have stayed out kayaking!