We had this idea to DRIVE (yes I know!!!) down to Philip Island (only 125km) and set up camp for 3 nights and cycle around the island over the 2 full days ... well we both have decided that we dislike 'car camping' and instead prefer the 'bike camping'.
Having the luxury of a car enables you to take more camping stuff and to make life a little easier than the 'stuff' restrictions of bike camping ... well that is WRONG! we are that disorganised with everything that we have been away from home for 24 hours and we are absolutely lost ... can't find anything, everything is in a different place/bag to what it normally is when we bike camp and to top it all off I forgot some stuff as per usual ... the only advantage that I can see with 'car camping' is the fact that you get to carry a normal size towel for the shower rather than the tea towel size towel that you normally carry when cycling!
So this morning we woke after a good nights sleep in our new tent and shade cloth ... 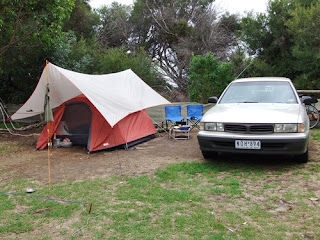 our rather expensive but light weight shade cloth covers the tent and provides very good shade.
last night we went for a walk in the evening and the caravan park is on the beach .... 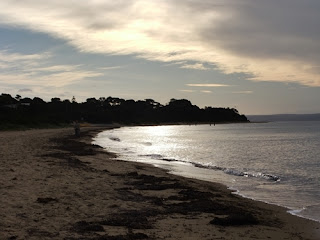 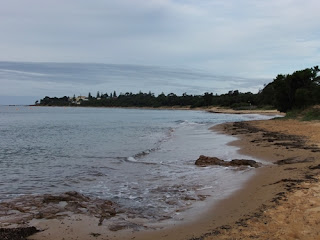 so onto today ... like I said we wake only to find the kitchen doesn't open until 8.30 so we have to wait for 30 mins. We find kouta is scratching like any due to the grass so we go to give him a tablet and find that he won't eat any food (he stuffed himself silly last night with the chicken he had) so he is suffering.  So we decide to quickly set off so he can settle in the trailer, get hungry by morning tea and eat something with his tablet in ... well sounds good in theory but in practice ... what a disaster.  We get 50m, pass a takeaway and neil decides to buy kouta a dim sim to try the tablet ... no go there... so we head off towards the Nobbies and the Penguin place hoping they won't mind a dog scratching himself ... well once we saw the sign at the turnoff for the Nobbies saying there are penalties for dogs we decide to give it a miss and continue on to a beach called Kitty Miller Bay ...  get off the bike and Neil takes Kouta out and I look in his basket and see that there are strange looking 'stones' ... stones alright the little minkey has done a crap in his basket OMG!!!!  and to make it worse no dogs allowed on the bay!  so we sort of wash his paws (as I think he stood in his crap) and decide that we can't put him back in the basket, so Neil folds up the basket to carry it on his racks and poor ole Kouta has to sit on his mat in the trailer.   Took a quick photo of the bay ... 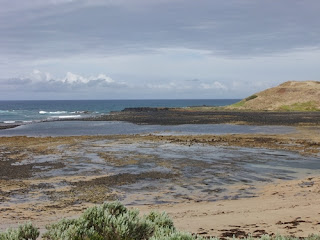 continued on and decide to head home but saw that Kouta was doing quite well in the trailer and didn't mind not having a basket to sit in, so we decide to continue and to go on a 4km detour of gravel road to Pyramid rock ... get there and no dogs allowed! so we pedal back and had lunch on the side of the gravel road ... sort of guessed that most places here wouldn't allow dogs so we weren't annoyed or anything but I did manage to take a photo from the carpark ... 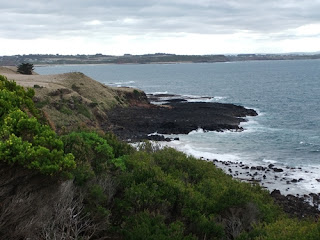 the land in the back ground is actually main land Australia!
Below is a photo of Neil and Kouta ... not very happy by the way Neil is standing! 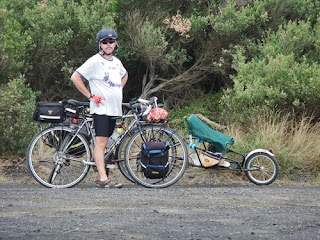 Just up the road from the detour we just took is the Phillip Island Grand Prix circuit ... we could hear the roar of motorbikes all the way down to Pyramid rock but could not see them.  Couldn't go in as it was a private running of bikes but I did manage to get this photo of the 'bike pit' alongside the edge of the circuit road. 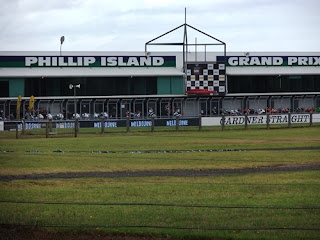 after here we start to head home - an easy and uneventful ride!
So we managed to do the west and south side of the island and tomorrow we will do the east and a little of the south that we didn't do today.
So we are sitting here, it is overcast and a little chully at the moment.
the park is filling up - it is okay (only 2 of the parks here on the island take dogs) very expensive $37 before discount and the facilities are ok - camp kitchen but have to pay $2 a night for the hire of cutlery, microwave, toaster and jug.  but there are gas rings for us to boil our water in.  Lucky the fridge is free to use!
One thing we are finding is with our silly dementia ridden dog is he is acting really unsettled and like he has never done this camping thing before ... I am putting it down to the concept of 'car camping' !!!
til tomorrow!
Posted by Janet O'Brien at 3:20 PM